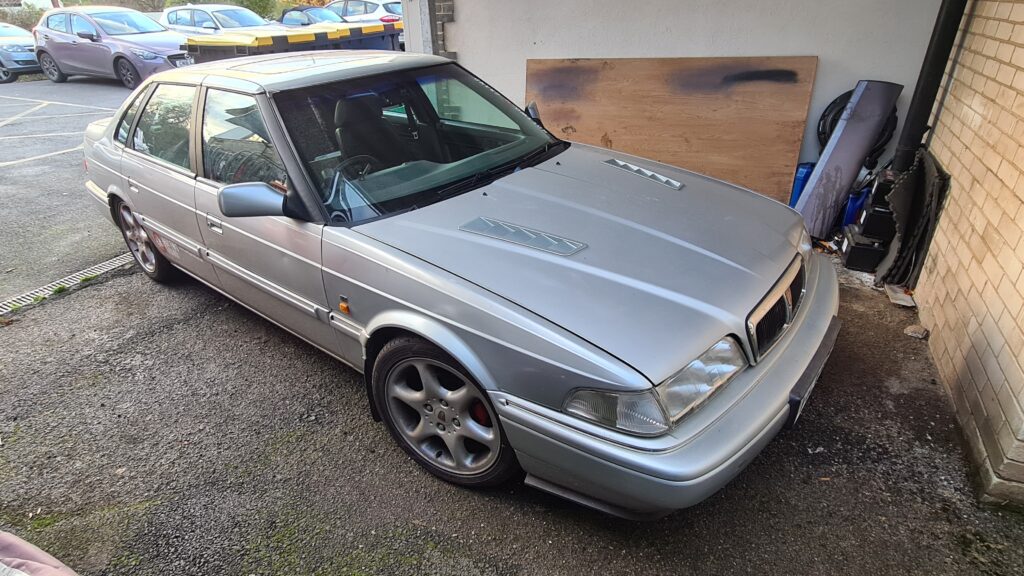 What a rollercoaster of emotions this car is. I finally got it running, driving and on the road. This was of course a joyous moment. Then it broke, which was less joyous. Then I sent it to a garage, and now it’s back, but it’s still broken. But for an entirely different set of reasons. However, it is running and driving still, so it’s not as broken as it has been in the past. Rovers, eh, who’d have them? 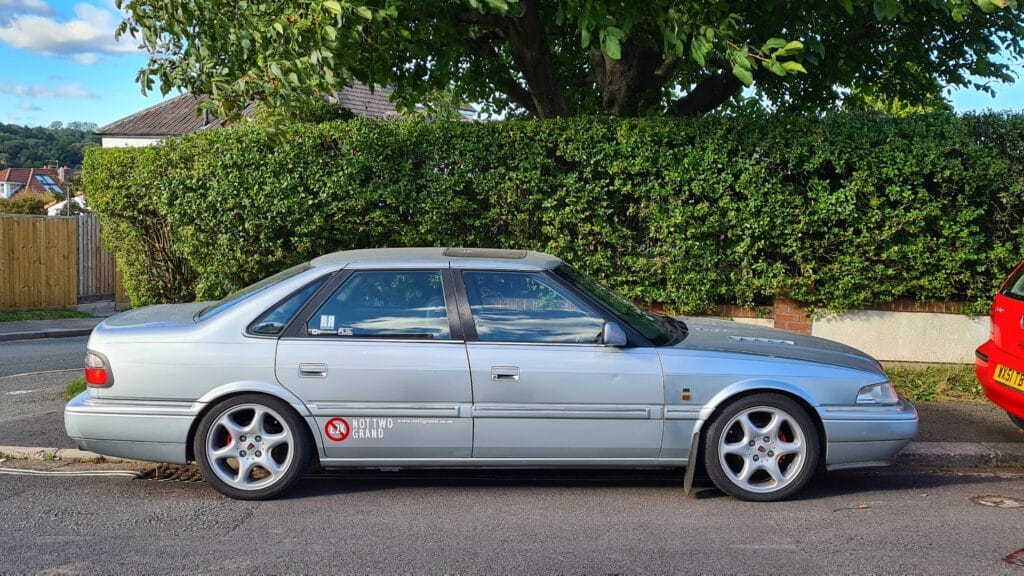 Right then, so, in the last update we got as far as the driveshaft breaking, the new one going and the car still not driving. It was at this point, and because I was sick of being covered in molly grease that I decided to bite the bullet and send the car to Duncan at Alfanet. It needed some other work doing, which was a bit out of my skill set, so it made sense. He fixed the drive issue, which was basically a failed retaining clip (phew) and he also did a load of other stuff. New timing belt and tensioner, new cam seals, new water pump, new exhaust manifold gasket and a proper bleed of the brakes and clutch. Three hundred quid later, the car was done and back on the road. However, work was still needed.

The exhaust system for starters. Mine was blown, but I had managed to score a Mongoose system from another Vitesse owner for the bargain price of £77. This is now on the car and it sounds fruity. Very happy with it. And very happy with how well it fits. Straight on, new rubbers, job’s a good’un. Had to trim a tiny corner off the bumper, but that was all.

Then I hard to sort the oil light out. It was flickering, which made no sense, as the pump is recent, it has loads of oil and it had never been an issue before. Thankfully, it was just a sender issue, so there’s a new one on now, and all is well again. 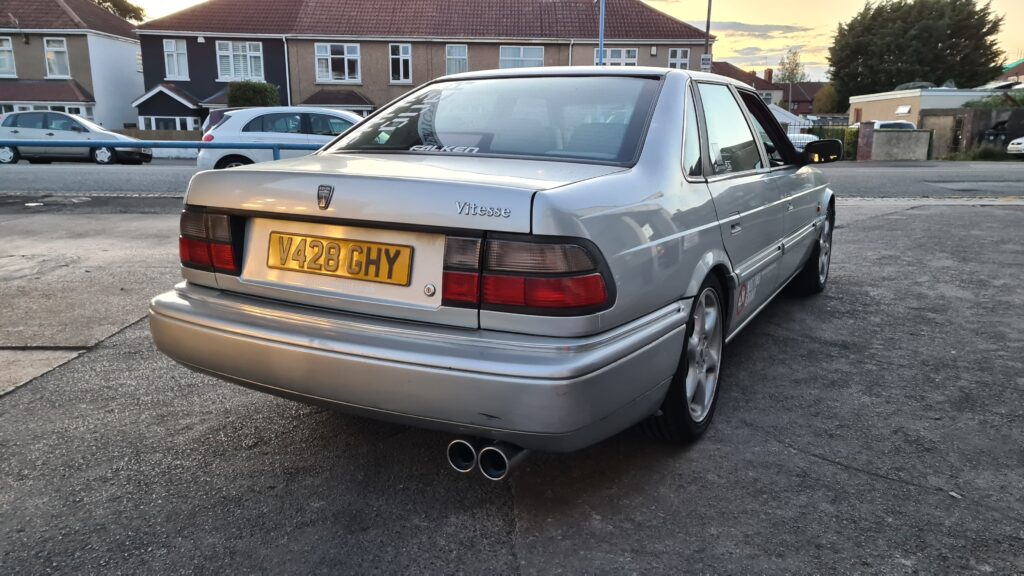 That wasn’t the end of the things that needed doing though. There is still a boost issue, by which I mean it’s boosting far too hard. The ECU has a fuel cut-off at 14psi of boost, and the car gets there far too fast. Hitting the cut-off is akin to hitting a wall. Plus, it won’t be doing the engine any good. I’m convinced the actuator isn’t… actuating. As such, I took my debit card down a dark alley, kicked its teeth in and splurged on a Forge adjustable item. It’s very shiny. I also managed to find used Forge blow off valve for fifty quid, which is handy as the BCV was in bits. The new valve just bolts into the side of the turbo. Dead easy. The actuator, not so much. It’s behind the turbo and there is no easy way of getting at it. I think the only way is going to be from underneath. Fun. 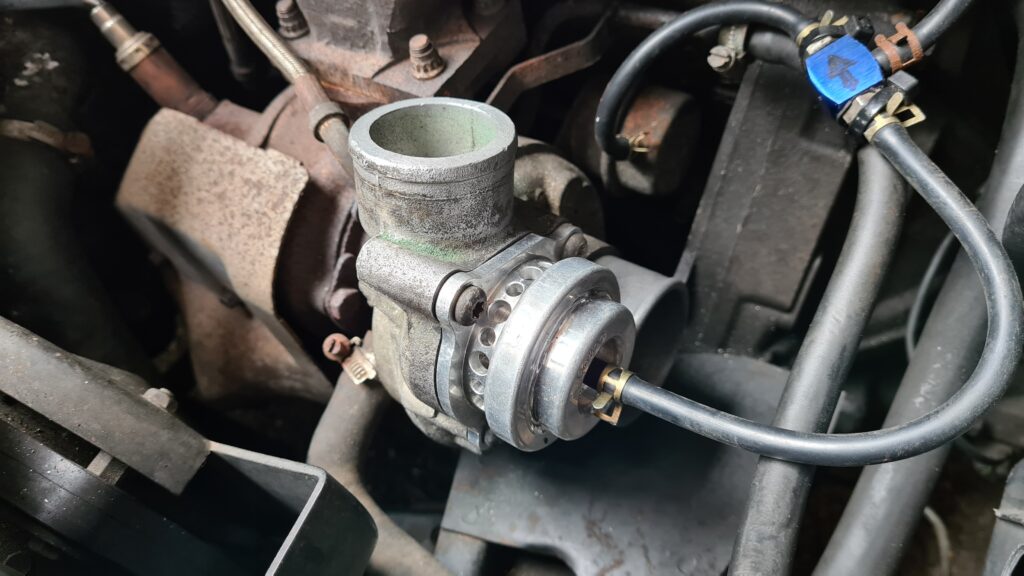 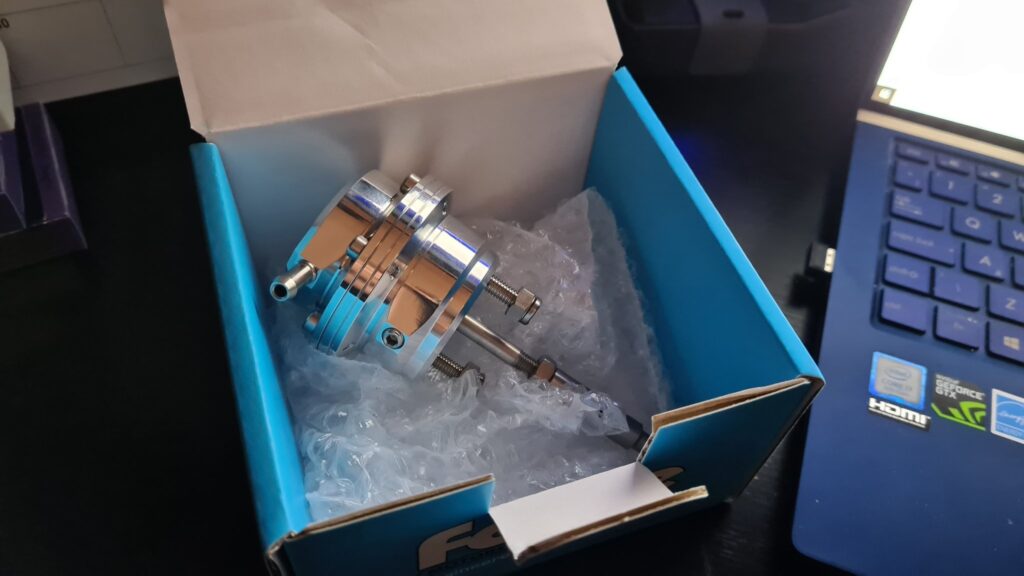 What else? Oh there was a small but incessant rattle coming from the nearside front corner, which I managed to cure. It was just a loose bit of, um, suspension. Nothing to see here. I also fitted a new stereo. There was nothing wrong with the Pioneer one that was in there other than the fact it couldn’t play CDs. So I sold it on and bought a nice Kenwood unit that can. Bonus points for it having changeable colours, meaning I can get it to match the glow of the 800’s dash. Noice. 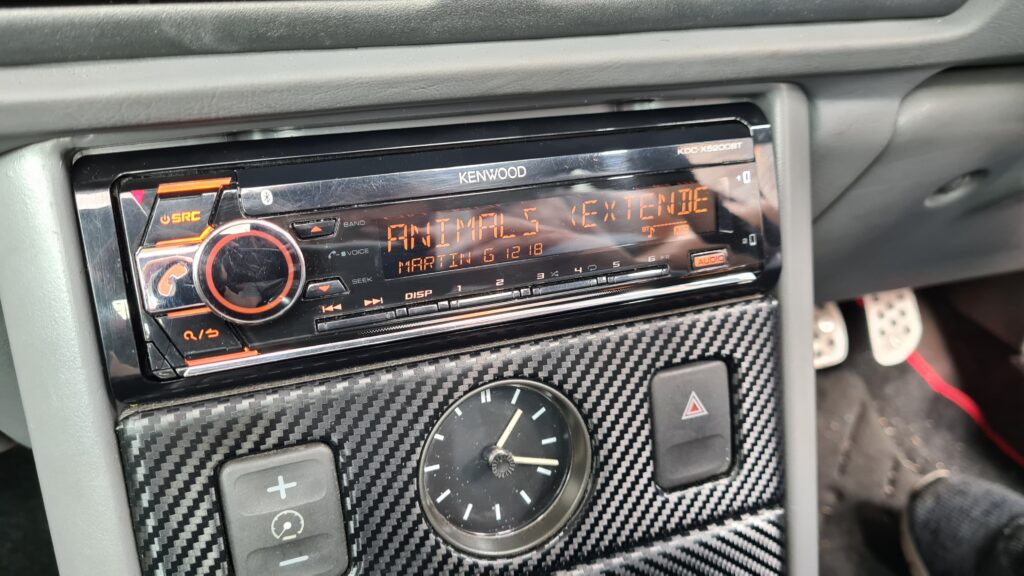 Going back to the exhaust fitting. When it was on the ramp at my mate’s garage, we noticed it was leaking coolant. This is hardly surprising, given it’s a Rover. But still, it’s annoying. Turns out the lower front coolant hard line has corroded, which I can’t really be upset about. It’s mild steel and it’s right at the front of the car. After two decades, it was bound to give up. The annoying bit is finding a new one. Parts for the 800 Vitesse are not easy to come by, so I was preparing myself for a session of bodging. However, the car gods smiled upon me and I actually found a brand new one in Portugal of all places, so that’s on its way. And while the same gods were smiling, I found a good condition upper coolant rail, too! Once fitted, and with the new Audi A4 expansion tank, the cooling system should be solid. But that’s all work for the future, as I’m still waiting on parts. 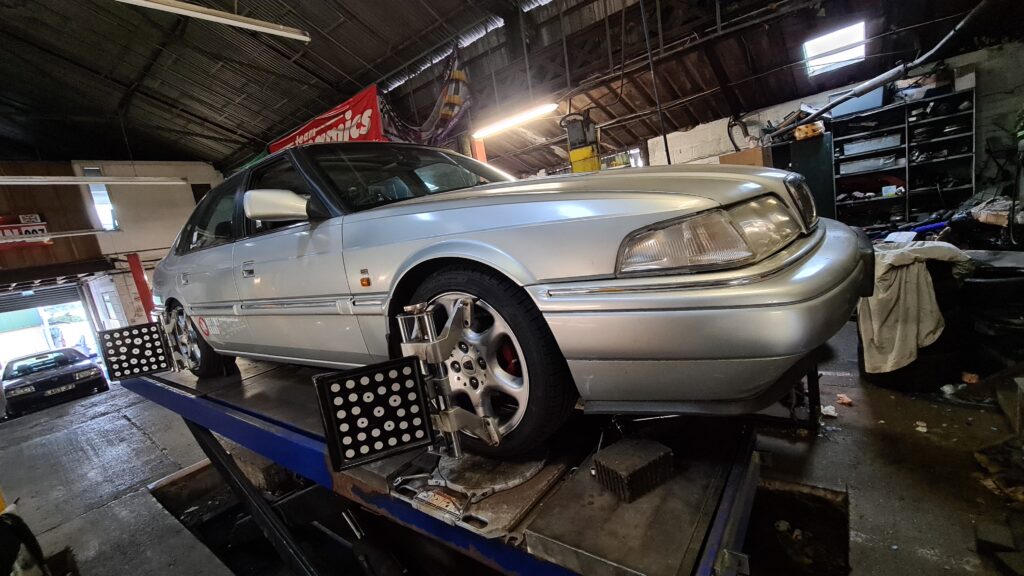 I had a full four wheel alignment done, too.

Then, finally, there is the most recent development. Those of you who follow me on Twitter will have seen that, thank to living next door to sub-par dough-slingers, Domino’s, the 800 is now somewhat damaged. They stacked a load of trays far, far too tall and then the wind hoofed them over into my car. Leaving a nice big ding in the rear quarter, right on the corner. Sub optimal. Happily though, the 800 is forever under the watchful eye of my CCTV, so Domino’s had zero in the way of comeback and as such admitted liability. There’s a settlement in lieu of repairs currently being worked out. Then, once I have that, I’ll send the 800 to a body shop to be fixed. 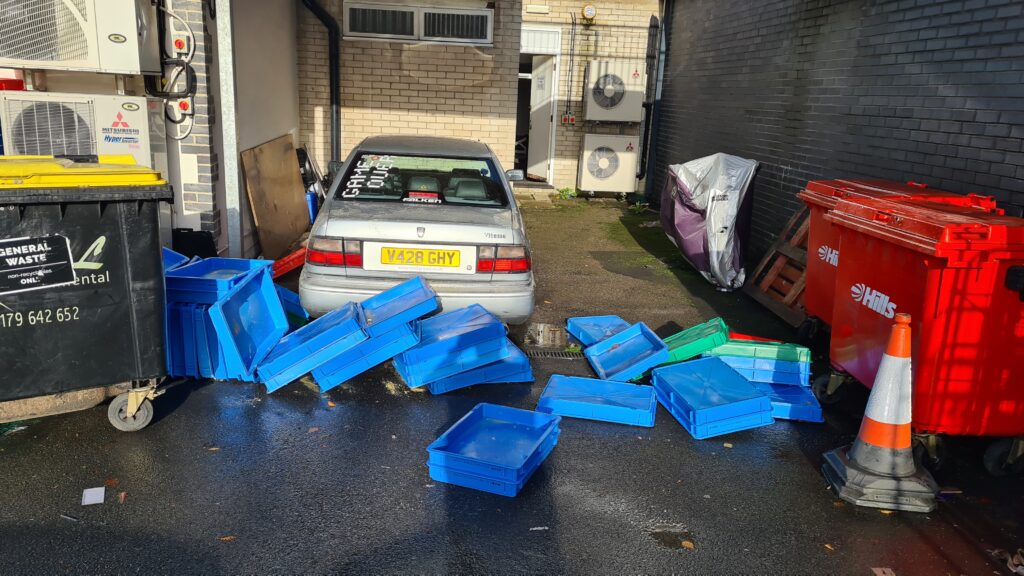 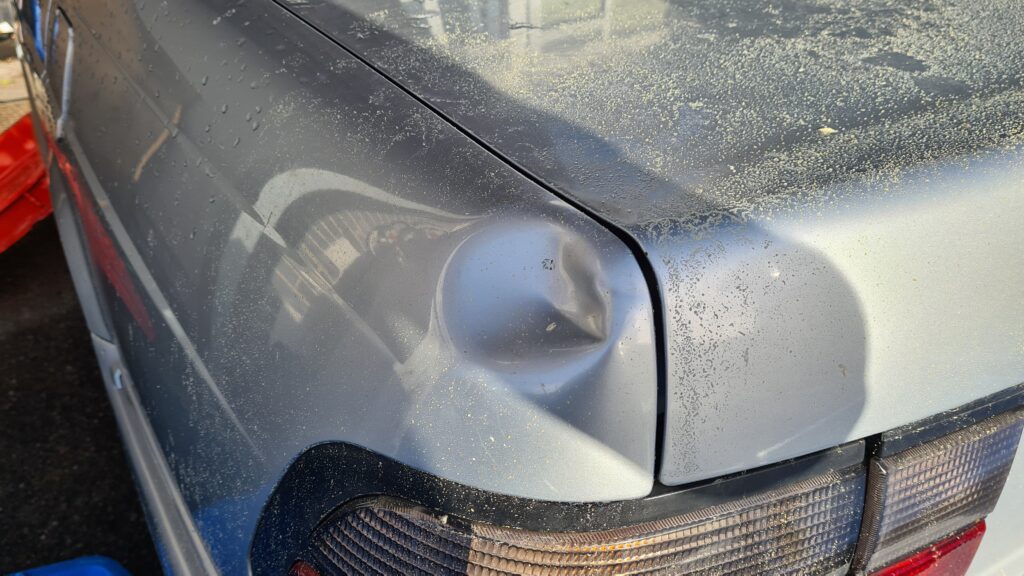 Sigh. This is why I can’t have crap things, let alone nice ones. But hey, at least it’s being sorted and it’ll give me the shove to get it into a body shop. Every cloud and that.

So have I been using the car much? No, not really. The coolant leak and boost thing have put me off, but once they’re addressed I’ll do some sort of road trip in it. At the moment it’s just a case of trying to find the drive and motivation to do anything with it. I think we’re all struggling a bit this year, what with it being such a shit show. It’ll get better though, and so will the 800 with any luck. At least, while progress is slow, it’s at least going in the right direction, and there is a lot to be said for that.