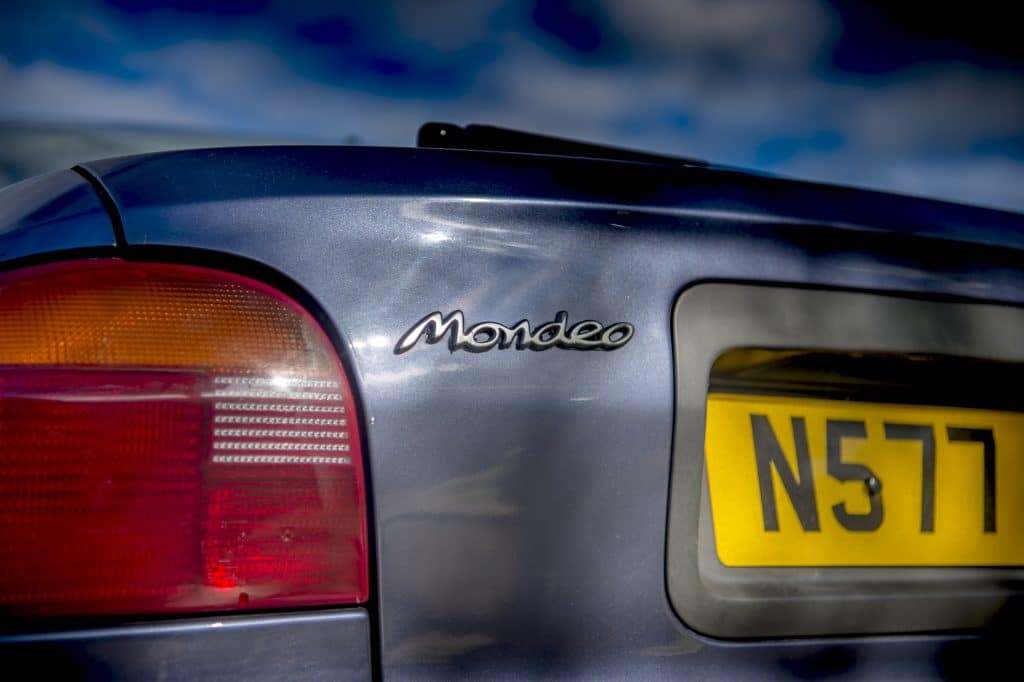 …that’s a quarter of a century. We’ve had the Ford Mondeo for a quarter of a blimmin’ century. That’s quite astounding. But then, when you consider that Ford positioned it as being a ‘world car’ back when it was nothing more than a sketch, it sort of makes sense. Ford wanted the Mondeo to rule the roads, to be a champion of the showroom and to fill driveways up and down the country, and it did. That was partly because it was a firm favourite for company car buyers, but also because at its core, it was utterly brilliant. Though Ford’s idea of the future in the mid- ‘80s looked a little different to what we actually got.

That there is the Ford Probe concept, which was basically a Ford Sierra with some Total Recall props glued to it. It was also yellow. Because yellow is the colour of the future, right? Whatever its hue, it was just an idea, and one that didn’t stray away from the original Sierra at that. The Mondeo did though. It was a huge ground-up project that involved Ford of Europe and Ford USA coming together to create a car that could take on the world. And the Vauxhall Cavalier.

After Ford dropped an eye-watering SIX BILLION DOLLARS into the Mondeo’s development and design, it was ready to unleash it on the world. And the world was ready. Sales reps were fighting in the car parks of Moto Services up and down the country. Hate crimes on Montegos and Audi 80s had gone up 76 per cent and the streets of the United Kingdom were littered with the charred carcasses of Sierra GLXs – we wanted our new car, dammit. And in 1993 we got it. And sales reps rejoiced. They also stopped bitch-slapping Neil from accounts. All was well in the world.

The first-generation Mondeo was a world away from the clattery old Sierra it replaced. It has trick suspension including front and rear subframes for an excellent ride, it was front-wheel drive, its design featured swoops and curves and most importantly of all, it came with a factory-fitted pen holder just next to the hand brake. SALES REP BLISS. It was also the first car to be offered with a driver airbag as standard, and it also had side impact protection, traction control on some models as well as ABS. No wonder, then, it was European Car of the Year in 1994.

It wasn’t all good though. The looks left some people a little soft, and the Mondeo’s desire to be a world car meant that in theory, it could house everything from a four-pot to a V8. Nice on paper, but rubbish for front seat passengers who lost space because of the firewall and bulkhead, neither of which would ever see a V8. Shame.

We then got the facelift, or Mk2, a car we know all too well (though for what it’s worth, we’ve had two Mk1s, too). It was basically a Mk1 with more front passenger space, the rear seats were ever so slightly repositioned, again for more space, and Ford slapped some angry headlights on it. Both the Mk1 and the Mk2 came with dealer-fit duct tape on both front and rear bumpers.

Around 2000 we got the Mk3, and much like the original was from the Sierra, it was a world away from the Mk1 and Mk2. Mainly because it was roughly as big as Hereford. Bit in this sector, big is good. Very good. Buy yourself an estate Mk3 and you’ll have a car that can host the World Cup in its boot. You’ll find yourself buying battered furniture off Facebook Marketplace just to see if it fits. Which it will.

The Mk3 was a damn fine continuation of the Mondeo name. Despite being as big as aircraft carrier, it handled brilliantly, it was supremely comfortable and thanks to at the time cutting-edge common-rail diesel engines, it was wonderfully economical. Until an injector or four would inevitably die.

The Mk3 was also the swansong of performance Mondeos. The Mk1 whet our whistles with the 2.0 Si, the Mk2 gave us the 2.5 V6 ST24 and for the Mk3 Ford once again upped the ante with the ST220, a 3.0 V6 powerhouse that went as fast as it looked. And with a subtle body kit, diamond-cut allows and Recaro trim, it looked fast. Shame that it only did four foot to the gallon. But hey, they did a visually identical model but with a derv, namely the ST TDCi. Again, a car we’re more than familiar with.

Since the Mk3, we have had the four and the five, both of which are recognised around the globe as being a great car. But that’s what the Mondeo is; it’s a brilliant car. Even now, in a time when everyone thinks they need an SUV, the Mondeo still sells. Sales reps up and down the country still get a giddy thrill when they see ‘Mondeo’ on their list of possible motorway hacks. And more than that, many of them choose the Mondeo over the likes of the C Class and the 3 Series.

It’s a global car, yes, but in reality, it’s us here in Britain that have truly embraced the Mondeo and as such, we’re responsible for its success. We love it as a car, but in recent years we have started to recognise it as a classic, a car we can look back on with fond memories. That’s a hard impression to make, but the Mondeo has done it.

The term ‘Mondeo Man’ is a very British thing, but it not a derogatory term. Quite the opposite in fact. The Mondeo is more than the Sierra ever was. And when you look at what sits in Ford showrooms today, the premium feel, the upmarket finish, the bold and commanding looks, there’s no doubt that that if you’re thinking about buying one, well, you’ve done okay for yourself.