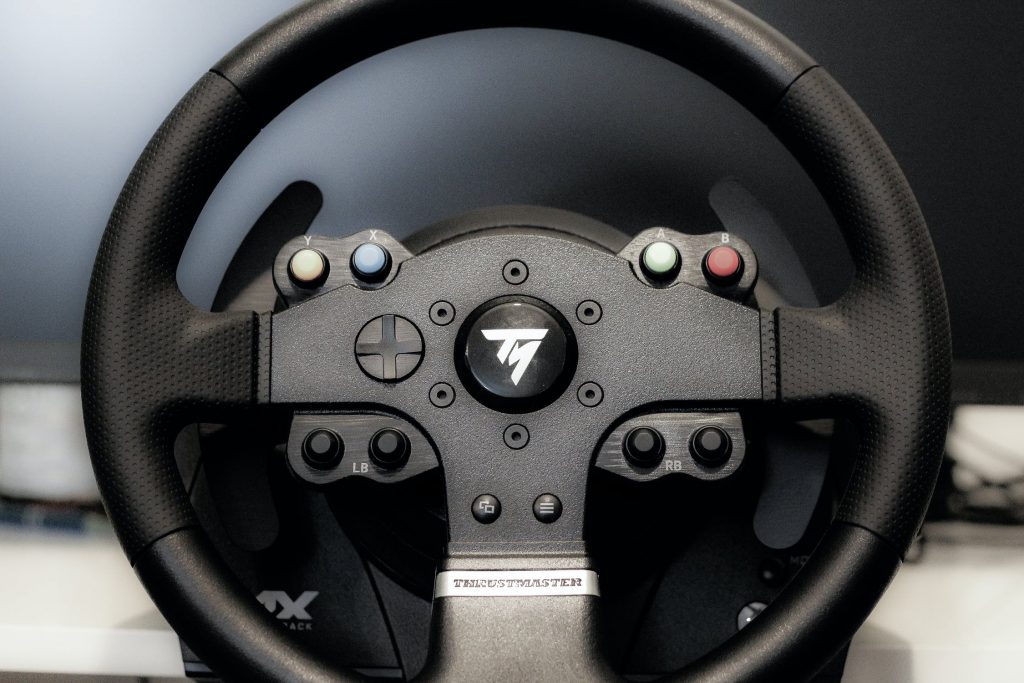 Cars and games go together like Not 2 Grand and shit old Rovers. Like cheese and biscuits. Like beer and Friday night bidding on auction sites. Yup, cars and games are best mates. These games allow us to live our wildest automotive lives. They give us a chance to be the race driver we always dreamed of being. They let us crash and smash our way around tracks. Or in the case of Carmageddon, they give us a chance to run over someone’s pixelated nan. No, really.

Modern car games, or should we say, simulators are alarmingly close to real life. If there was a vehicular Uncanny Valley, modern racing sims would have a home there. The physics are perfect, the dynamic elements like weather, road surfaces and the artificial intelligence competing with you on track is incredibly real. Damage, too, is just as real in some games as it is in real life (looking at you, BeamNG Drive). And this is all well and good, and we love these modern games, but there is still something to be said for the old guard. The games from ’80s, ’90s and ’00s that helped pave the way for what we have today. Games that got us hooked on digital speed. There are a lot to choose from, but even so, we have managed to pluck out the five games we reckon were the best. What do you think? 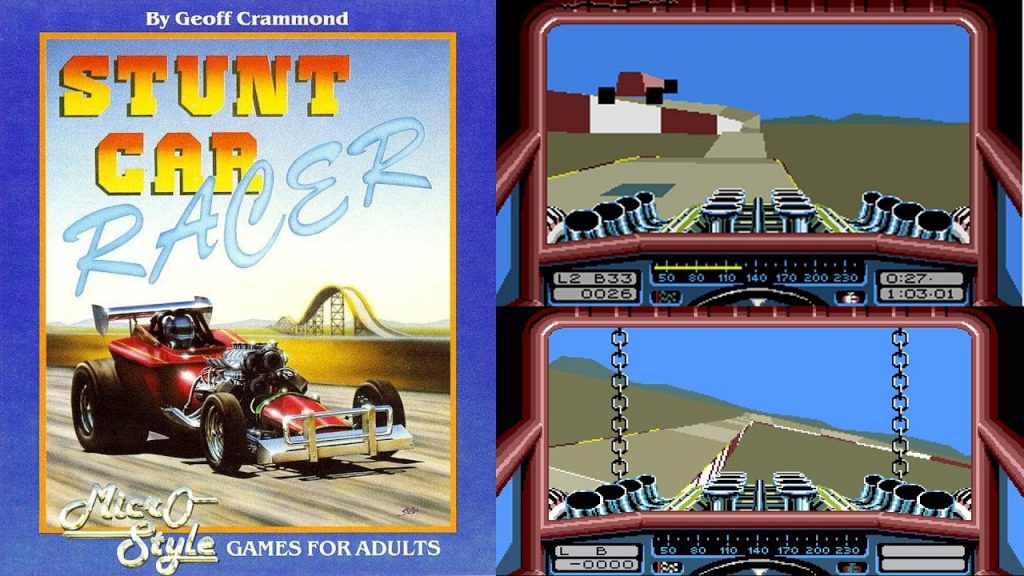 The late ’80s were rubbish. Everyone was wearing a worryingly flammable shell suit, your mum’s hair was so big it had its own post code, and there was no internet. We had to, you know, talk to people. Ugh. Awful. But in amongst all the awfulness, there was a glimmer of loud-revving, high-flying, blood pressure-increasing hope. The game was of course Stunt Car Racer. This game was like nothing else of the time. For starters, it wasn’t a platform-style game, or a ‘rear follow’ game. No, for this one you were IN the car. Your screen was filled by the view of the track ahead, and of course, the V8 engine and open headers of your stunt car. 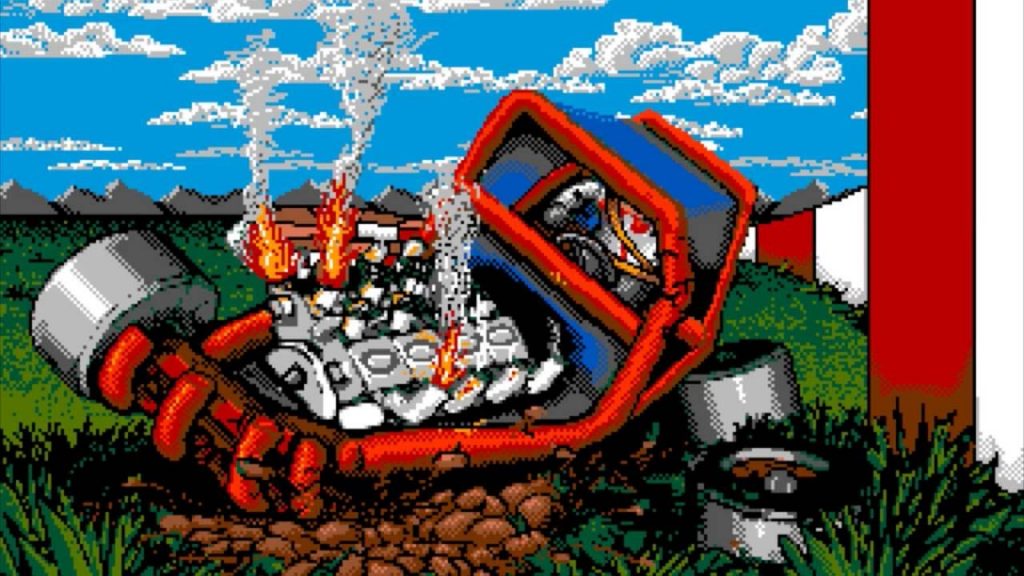 The game saw players trying to drive around tracks modelled in a 3D world. The tracks, which resembled roller-coasters with their inclines and banked corners, were narrow. Players has to fight for control, and had to calculate how much speed to use to clear jumps. Too little, and you would crash. Too much, and you would hit the ground hard and damage the car. Said damage was indicated by a crack in the windscreen that grew until the screen shattered, signalling game over. Stunt Car Racer was clever, it was forward thinking and it was addictive. But what’s most impressive is the fact it’s still fun to play today. Thirty-one years later. 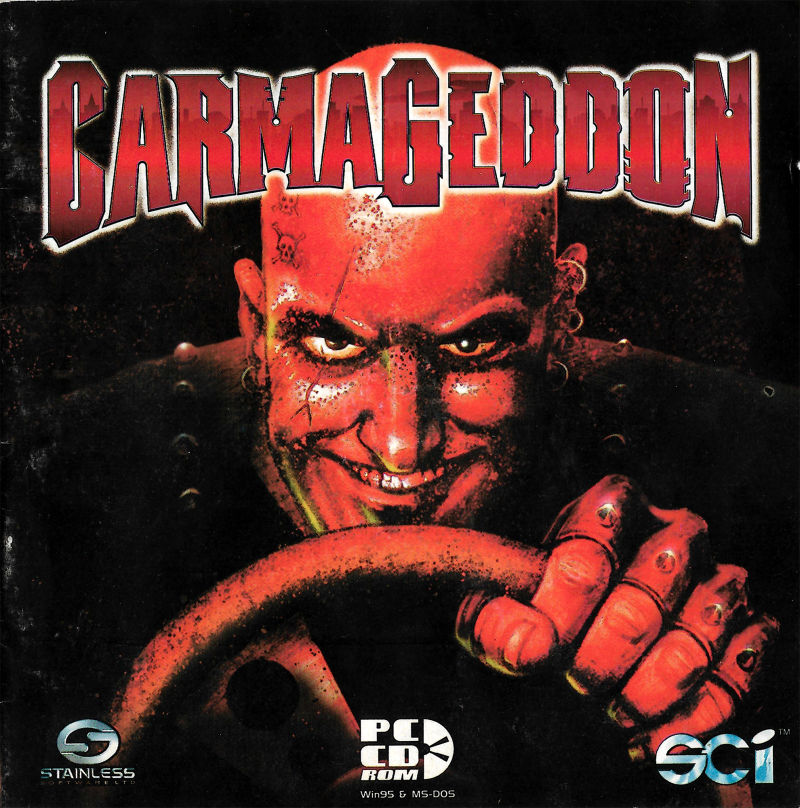 Now we’re talking. 1997’s Carmageddon was a game nobody asked for, but man alive were we glad we got it. It was an open world (unheard of for the time) racing game in which players could win by completing laps, by smashing up and killing every other opponent or… by killing people. Yes, Carmageddon was set in a dystopia in which cities are locked down, cars are layered with spikes and blades and where anyone wandering the streets is fair game. And mowing down people in full, splattery glory was only part of it. Handbrake turn through a crowd of football players and you’d get a ‘splatter bonus’. Nail a ‘ped’ (that’s gamer for pedestrian) into a wall and get a ‘piledriver bonus’, so on and so forth. It was, and still is violent. 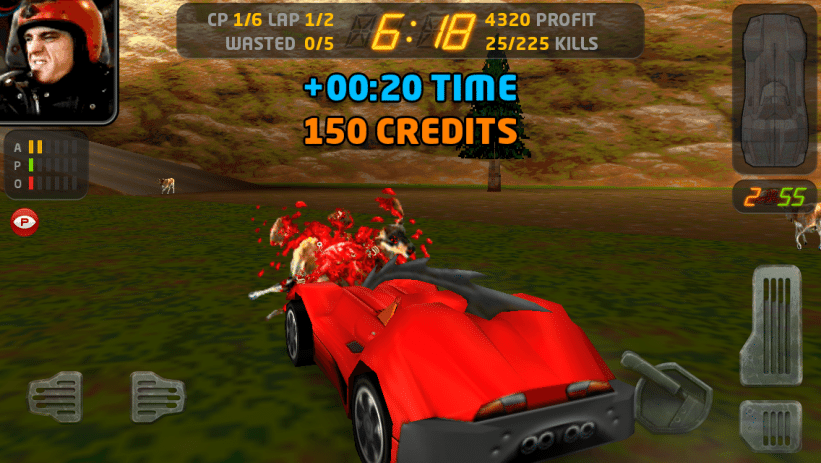 The dullards at the classification board banned the game originally, leading developers to changed the people in the game to zombies with more ‘acceptable’ green blood. Though it didn’t take long for the internet to offer a patch to restore it back to its blood red glory. But don’t think it’s all about violence. The game boasted a fleet of weird and wonderful vehicles, a frankly still brilliant handling model and damage like no other game. It also spawned a number of sequels, each more gory than the last. Top tip though – the console versions were never very good, this is a game for the PC. 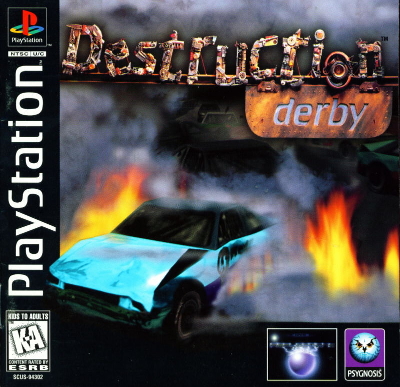 Another game with destruction at its heart, but with less in the way of driving through cows (yes, the red car above is driving through a cow). Instead, this classic that was made available with the launch of the original Playstation was a demonstration of what Sony’s new console could do. Prior to this, damage was a hard thing to master. It was a huge technical element to build into a game at a level other than aesthetic. But in the case of Destruction Derby the damage was more than visual. The cars warped and changed shape as you smashed them more and more. The handling changed, the performance slowed, it was like a real… um… destruction derby. 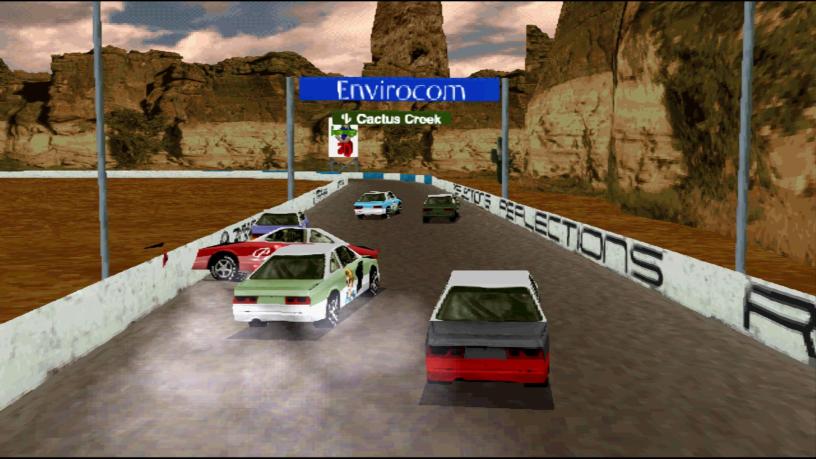 With cars that were all the same with the exception of paint jobs, players also faced a new challenge. No longer was racing about being the fastest, it was about being clever, it was about preserving the car and knowing when to hit other racers. It was a game that made you think about tactics, and that’s why it was such an evolutionary step in the world of racing games. Plus, it was brilliant fun. 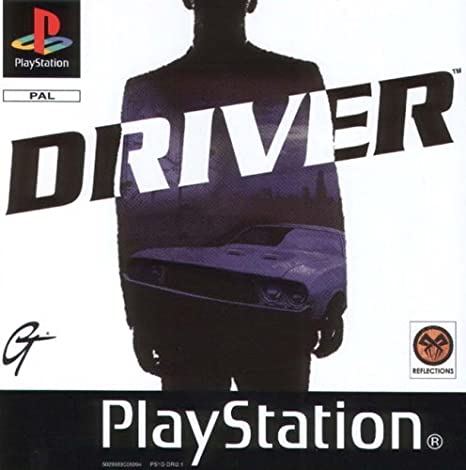 If you’re into cars, the chances are you spent time as a child watching American TV shows and films in which big, lumbering American cars would howl and scream around corners in a billowing cloud of tyre smoke. And, like us, you probably wanted a bit of that action. You wanted to be the hero (or maybe even the bad guy) in the big V8, sliding around corners. But you couldn’t be. Racing games were focused on racing cars and tracks, not city streets. That all changed, of course, with Driver, another classic title for the Playstation 1. 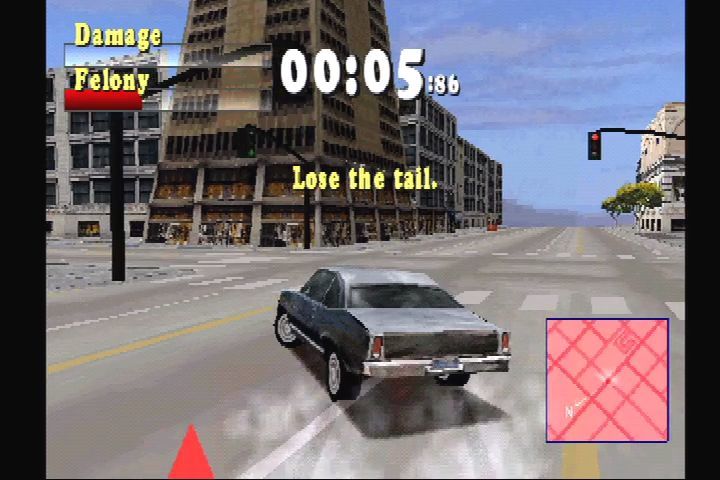 Assuming the role of Tanner, an undercover cop, you’re first mission sees you in an underground car park where you must work your way through a number of stunts. Burnouts, J-turns, handbrake turns, slalom and so on. It was a baptism by fire. But also taught you that there was a burnout button that would spin the rear wheels, and that was cool. And it also set you up for the rest of the game, in which you would have to complete missions in a sprawling Miami-esque open world. All while piloting a big, wobbly, powerful muscle car. This was it. This was the dream. 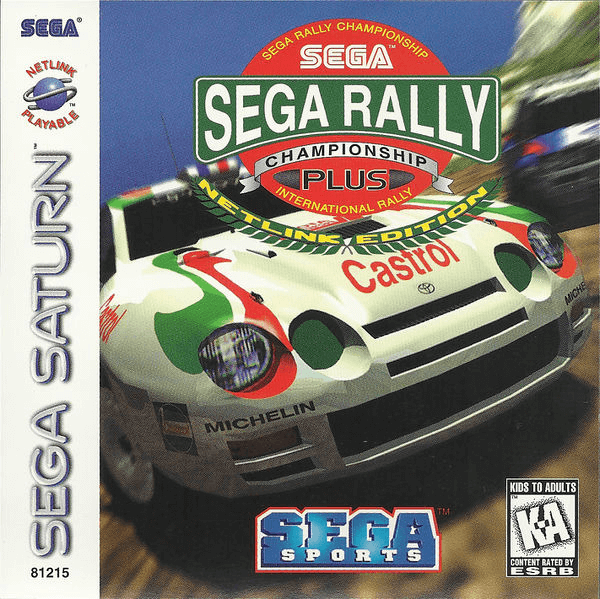 When SEGA Rally came out with the SEGA Saturn back in 1995 (good God) it was a revelation. We could finally drive the rally cars of our dreams. Cars like the Lancia Delta, the Toyota Celica and the Lancia Stratos. And we could race them around long, technically difficult circuits that featured mud, water splashes, gravel and tarmac. It was’t rallying in the traditional sense, with stages and so on. This was high-octane, head-to-head racing and it was highly addictive. 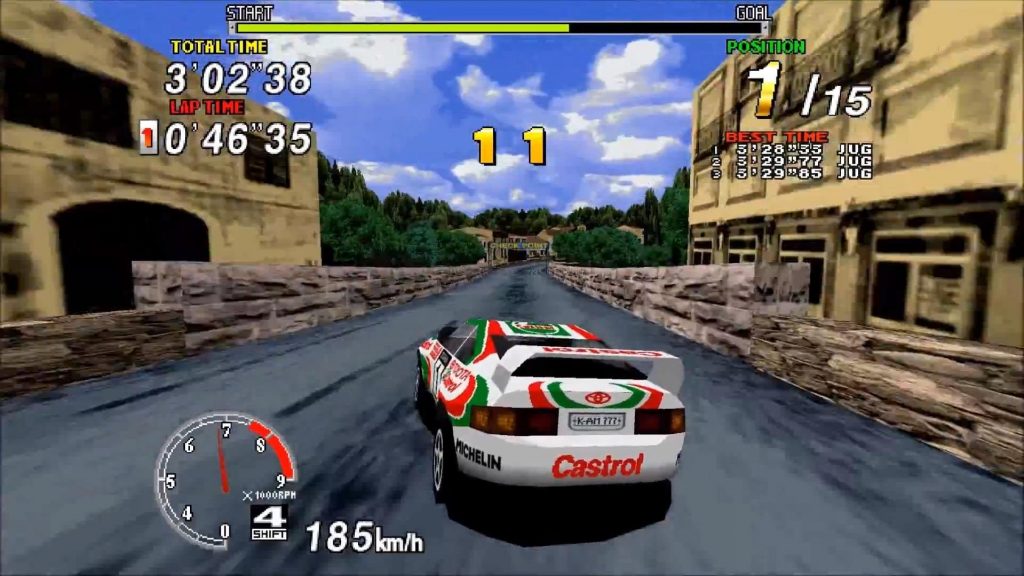 The Saturn was one of the first consoles to be offered with a steering wheel, which made the game even more immersive. Add in the frankly still brilliant vehicle physics and you were left with a game that would easily consume hours upon hours. It was fast, it was fun and it was exciting. It also cemented the notion of the rally game into the digital world. Yes, there were others before it, but it was SEGA Rally that really flicked a switch for the masses, spawning games like Colin McRae Rally, V Rally and everything that has followed since. Thanks, SEGA.