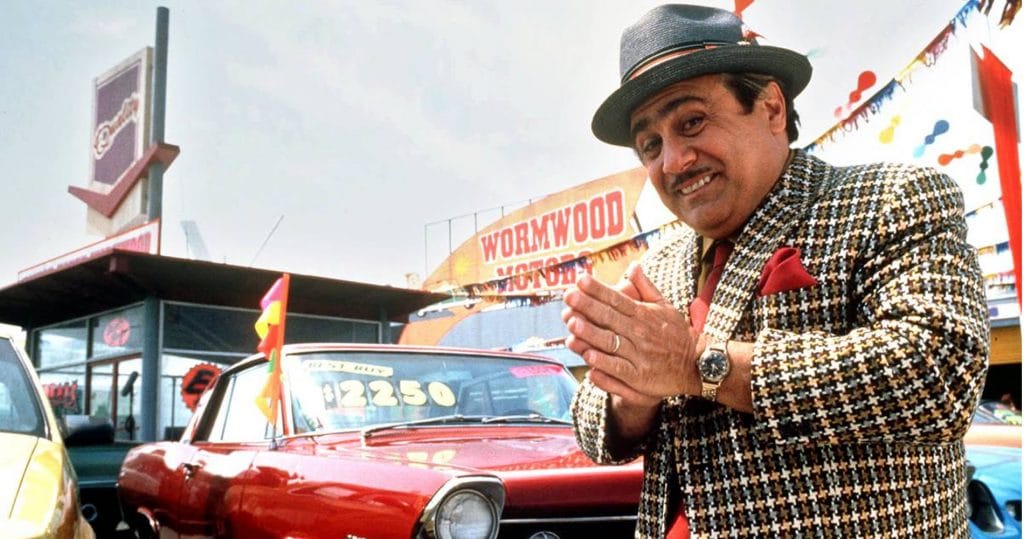 Buying a car is funny old thing, especially if you’re buying from a private seller.

They don’t quite have the ‘weeeey, cheeky chompy geeza’ smarts as Mr. Brewer. In fact, half the time, they don’t really like talking to people. But still, these people up and down the country decide to become a car sales person. After all, how hard can it be?

Very, actually. But the private seller is a savvy beast. He or she will have heard the lingo form other amateur sellers, or maybe from Mike ‘Jesus, that jacket is awful’ Brewer on the actual telly. So they wedge these sayings in the ad, thinking they will be the juicy worm that hides the hook of a sale. Or some other angling metaphor.

In the case of a dealer, such statements can’t be made. Trading standards would have a thing or two to say about it (though yes, plenty still fib). The private seller isn’t as bound, so they just throw them in willy nilly. Just like the five gems we’ve selected here…

Before you go all Germaine Greer on us, let us qualify why this statement is nonsense. One’s ability to be careful has nothing to do with your gender. Hell, it has nothing to do with your species. It could have been owned by a barn owl, and that barn owl could have been more careful than Sarah. Mainly because barn owls cant reach the clutch. But we digress.

Gender has nothing to do with it. It doesn’t need to be specified. Specify the caring nature of the owner by all means, but don’t think that adding in a bra means it’s a good thing. We’ve known guys who were fastidiously neat and tidy, we’ve known women who should probably wash more, and visa versa. It’s not a selling point.

“One owner from new…”

What a classic. So you’re looking at a ten year-old Clio, and you’re drawn in by the fact it’s only had one owner. That HAS to be a good thing, right? Well, no, actually. What if that owner was a stunt driver? Or liked to drive in squirrels? Or liked to pick his or her nose and wipe it on the underside of the seat? Or maybe that ‘one owner’ had a baby, and the baby once threw up in the car. And as we all know, that’s a write off.

One owner is not a steadfast good thing. A car can have many owners, and all of them could have loved the car. Our 20 year-old Saab has had over ten owners, and it’s still going strong.

Now this one is important. When you’re handing you hard-earned cash over to a seller, you want to be sure that the car has a decent history. And that’s the operative word there, decent. If it’s been serviced by Thick Dave down the road, who’s ‘qualified’ because he got a Halfords Professional socket set for Christmas, it’s no good. Even if he has scribbled a tick in the service book.

Dave’s work is probably okay in reality, but Dave’s scrawl in a book has little value when compared to a book with dated stamps from a reputable garage or dealer. Along with receipts for parts and labour. It’s those bits where the ‘full’ comes from. Full Service History is something to declare with pride, not patch together from scraps of paper in your glove-box. So if that’s what your seller produces, give them a wide birth.

“First to see will buy…”

Why? Why will the first person to see this car, buy it? It’s a stupid phrase. Maybe we’re just too damn cynical these days, but if we see that in an ad, it gives us the rage. By all means declare that the car is a gem, or one of the best, but don’t be so bold as to assume that we will take leave of our senses and empty our pockets the very moment our eyeballs point at whatever sub-par heap you’re selling.

There’s also the other possibility. The one where it’s such an old nail, such an unforgivable dog, that they will do anything short of giving it away to make the first person buy it. Rare, but it happens. We’ve been there.

Bollocks. Don’t care. Low mileage cars are seen to be the holy grail of used motors. Why? A car is not a Faberge Egg. It is a car, and by its very nature, it’s meant to move. If it doesn’t move, things cease up, seals perish, fluids settle, parts corrode. It is not a good thing. A car not moving is like a steak not eaten, a pint not drunk, it’s living a life in contradiction of the very purpose of its creation.

Lower than average is fine, but if it’s silly low, just walk away. We bought a W202 Mercedes-Benz that had 27k on the clock. We thought we’d won the motoring lottery. We hadn’t though, because as soon as it was put to use – the normal use a car should expect – it died. Then when we fixed it, it died again. Nuh uh. Ignore.

The one with 175k on it is a better bet, as long as it’s not been serviced by Dave.