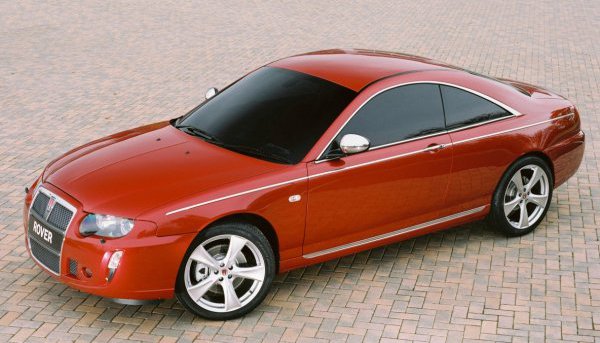 Rover is long dead, but those who love the marque (ourselves included) are very much alive and kicking. You don’t have to go far on the internet before you stumble upon a forum or some other page dedicated to Rover’s last big offering.

There are people out there who, though, who aren’t happy with the departure of Rover. Not for sentimental reasons, but because the company’s demise meant it was unable to finish what it started. A case in point being this, the Rover 75 Coupe.

A bit of a stunner is it not, or should we say, was it not? You see, it never saw the light of day. Penned with care and consideration, and with a view to being a sales hit (which it no doubt would have been – just look at it) it ended up being an unfortunate casualty of Rover’s sudden closure in 2005. Rover teased us with it, but we never got it. In fact, we never got anything from Rover ever again.

But that’s not the end of the story. You see there’s a man in Wales by the name of Gerry Lloyd and he’s a fan of Rovers. He’s also a fan of cutting up Rovers and making weird and wonderful cars out of the resulting trimmings. You may have seen his double-ended 75 on an AA advert, for example.

Well, Gerry liked the Coupe. But he couldn’t exactly order one, so instead he did what any rational person would do. He built one.

He started with a Rover 75 and an MG ZT, and went at them with cutting discs, grinders and wine. But you’re not surprised by the wine. This is, after all, British eccentricity at its best.

Then Gerry went back at it with a welder, a pile of metal off-cuts and his skilled, if possibly tipsy eye. Lots of cutting, lots of stitching, lots of welding, lots of wine. It was a project that in bodywork alone would run into thousands of hours of work. Gerry is skilled, there is no doubt, and his skill gets even more impressive when you consider the fact he did all this on his own.

Gerry went for a hue befitting of the the concept, obviously. Paint was easy though. It was the glass that was the real head-scratcher. In the end, he used BMW coupe side glass (as evidenced by the Hofmeister Kink not evident on the concept) which, given what happen with MINI, is somewhat ironic. But hey, what works, works.

The doors were lengthened, so custom glass had to be fitted. Front and rear screens were bonded in, to add to the sleep look. And what a look he achieved. It might not be 100% accurate to the concept, but really, are you going to argue? Of course you’re not. Just look at it.

Absolutely outstanding. but Gerry wasn’t done yet. the car would need an interior, so using a mish-mash of part, Gerry ‘knocked’ one up. It looks better than the work we’ve had done by professionals. Not a man in a shed. With some wine.

Is it perfect? No. Is it pretty damn close? You bet it is. And Gerry has done it properly – the car has been through an IVA and is now road legal. Some of you may have even seen it at shows.

Oh, and remember when we said Gerry started with a 75 and a ZT? Well, the ZT ended up being the donor proper, so the Coupe is powered by the 190 V6. Grace and pace, right there.

You can see the full build thread here, though since Photobucket ballsed things up, the pictures aren’t there. You can find them here. And find them you should. This is car to be celebrated. One man’s vision to tend to some unfinished business of, dare we say it, cultural importance. Or just a bloke with some wine. Either way, we love it.