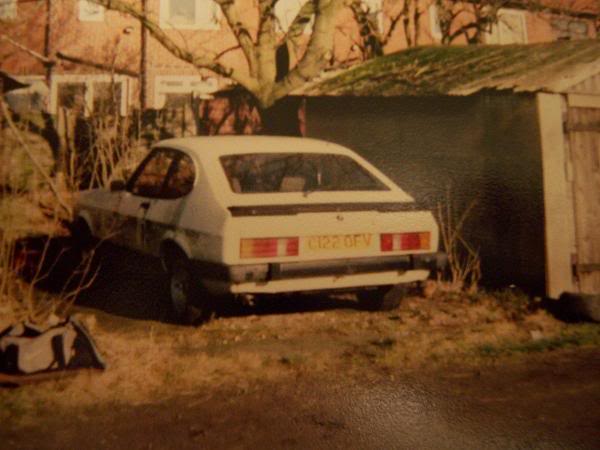 This was a covert mission, surrounded in stealth, mystery and near Bond-like manoeuvres behind bushes. Mainly because the car was located within some shrubbery, not because I was some sort of bush-dwelling teenager. That phase of my life came about in my early 20s. But I digress.

Safely away from the central-Manchester industrial estate that had played host to my last two automotive crimes, I was living life with my father’s stern words still echoing through my ears. Words like “you’re an idiot” and “don’t buy any more cars. You’re four-fu**ing-teen. Buy toys or something”, for example.

I didn’t listen. Instead I bought this… 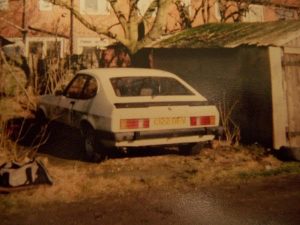 Sorry for the crude picture of picture. But hey, at least this a snap of the ACTUAL car
Easy to see why I had to have it, right? Thick with moss, concealing lots of rust and containing an interior that had a worryingly strong odour of something that had died (some time ago), it was a peach. It was also the first car to see me bust into the big money arena of three figure prices. Gone were the days of £40 cars. This one was a gem, a classic, a beauty. One has to pay a premium for such a fine automobile. Or in this case, £200.
Piggy-bank still in shock, I collected the keys and immediately maintained my automotive modus operandi by sitting in it and touching things. I moved the indicator stalk up and down. I waggled the steering wheel a bit. I pressed some pedals. I adjusted the seat a bit and I opened the bonnet AND the boot. As you can tell, I was expert in ascertaining a vehicle’s quality.
It had no battery, so I had no idea if it would run. It had an engine though, and the headlights were still where the men at the factory had bolted them in the early ’80s, so at least it was an improvement over my last Capri, not that such an accolade was difficult to achieve.
Happy with my purchase I crafted a plan to restore the once magnificent beast to its former glory using nothing but my bare hands, some cleaning products stolen from my mother and a £9.99 tool kit. This would be a doddle. 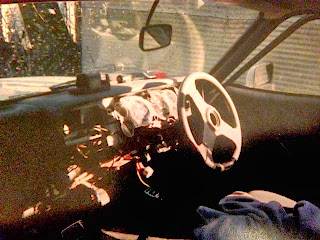 First thing I did was take the dash off. There was no godly reason for me to do this other than being motivated by a screwdriver and easy-to-spot screw heads. To my knowledge there was nothing wrong with the dash other than it had the cheek to be in place. So, as illustrated, I removed it. I then took a picture and put it back.
You may be able to identify a theme here – I HAD NO IDEA WHAT THE HELL I WAS DOING.
I got really technical after that. I took the back wheels off… 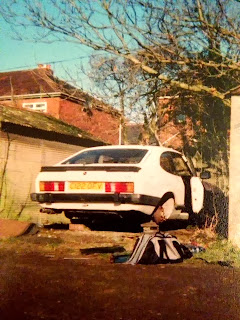 …took a picture, sprayed the brake drums with WD-40, then put the wheels back on. Clever boy.

Was it a job that needed to be done? It was not. But that wasn’t going to stop me, I was on a roll by this point, or so I thought.

Now here’s a little lesson in life should you be a 14 year-old boy with a penchant for buying rusty crap: if your Dad made it crystal clear that buying another car was well and truly off the metaphorical table, do make sure you don’t leave your car keys on the very physical table in your family dining room. Do this and I can assure you that upon questioning, you’ll have a flap and reveal all in a mix of squeaky sentences full of words attempting to offer some kind of justification, all while shaking quite violently. 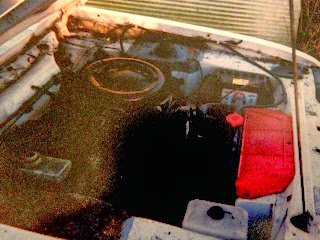 No particular reason for this image other than to prove it had an engine
As you can probably guess, father Pollitt wasn’t best pleased. Though what happened next was, in hindsight, possibly the best outcome.
Insistent he saw the car, I was ordered to disclose its location and show it to my father. Again, it was another journey (albeit somewhat shorter than last time) to the car, spent in insufferable silence. Then, as we rounded the corner into the back alley my C-plate Capri called home (I know, classy, right?) I found my eyes once again welling up due to a car, or as fate would have it, the absence of a car.
It was gone. Nowhere to be seen. Along with my mum’s Mr Sheen and my £9.99 tools. Smashed glass on the floor offered a clue as to its fate, but very little in the way of comfort.
We later learned the car had been vandalised one night, something akin to Christine…

…but with a decidedly crappier car as the subject of the vandal’s attention.
Needless to say, the home owners nearby complained and the Police carted the old girl away to meet her fate with the crusher.
Rusty and moss-covered though it may have been, I was still more than a little sad. That’s probably why Dad didn’t give me a bollocking. In fact, he didn’t even give me talking to other than to suggest I take it on the chin and maybe “stop buying cars, you twonk”.
And do you know what? I listened…for about a year.
Facebook Comments
automotive / autotrader / banger / capri / Capri Laser / car / cars / classic car / Classic Ford / dagenham / ebay / ebay motors / Ford / Ford Capri / Ford Capri Laser / laser / motoring / old car / pinto / retro car / retro ford / rust / scrap / scrap car