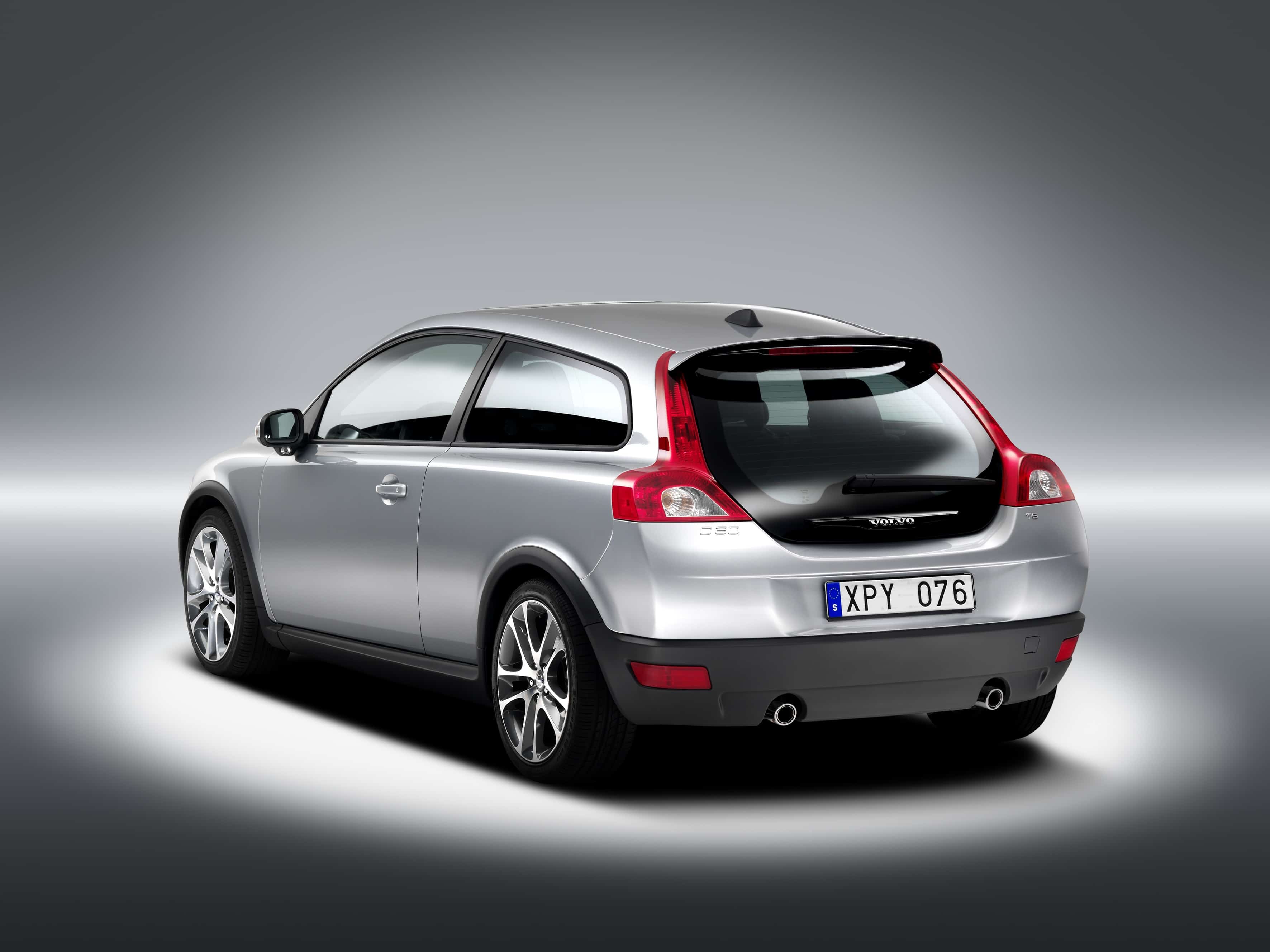 Do you remember the Volvo 480? It emerged from the ’80s, which was also the same time Volvo was using setsquares and rulers to hone its car’s lines. As such, the 480 came as a bit of a shock.

Here, have some dubious marketing images to remind you. We particularly like the lamppost placement in the black and white image. Oh, and the shocking composition of the red car is nothing to do with us.

Now don’t get us wrong, the 480 wasn’t the first time Volvo used a curve in its designs. After all, the Swedish carmaker had given us such beauties as the P1800 and the Amazon – both beautifully sculpted machines. It’s just that in the 1980s, we’d become somewhat familiar with Volvo’s boxy, straight-lined aesthetic. Basically, despite the 480 being a very good car, we just weren’t ready for it. Shame. Still, it didn’t deter Volvo, because in 2006 it had another go at building a small, exciting hatchback. And this time, we were a little more open to the idea. Let us introduce you to the Volvo C30.

Though it wasn’t a normal 3-door hatch. Access to the boot came via an opening glass panel rather than the full metal door you may be used to on other cars in this class. It was just one of a number of unique design ideas that really made the C30 stand out. Yeah, the rear hatch was useless if you wanted to get a washing machine in there, or some shopping, or a small village like you might do in a traditional Volvo. But hey, it was cool. Plus, it was marketed toward the younger, more style conscious driver, who has little concern for white goods.

Further instances of style being a priority could be found within the C30. A ‘floating’ centre console looked like it leapt straight out of an episode of Grand Designs, while the rest of the dash had a cool and simple aesthetic. In fact, being in the front of a C30 is no bad place to be at all. The seats are relatively comfortable and the overall fit and finish has been executed to a high standard. But when Volvo was eyeing up A3 and 1-Series buyers, that’s hardly surprising.

However, unlike the A3 and 1-Series, if you’re planning to sit in the back you’ll need to remove your legs and have the hips of Iggy Pop. There really isn’t a lot of room back there. In fact, there are only two seats, not the three you’d anticipate from a car in this class. A small family car this is not. But remember, it’s stylish. And opting for style over substance is always good, right?

So what about the oily bits? Well, there were plenty of engines to choose from. 1,6 litre petrol started off proceedings, though it was somewhat glacial in pace with just 99hp. That just means passers by will have tome to admire it. If you don’t want to be stared at, the 2.0 petrol had a bit more pace with 143hp. Then you’ve got the 2.4 petrol with a much more respectable 168hp. Or finally, there’s the T5 option with the five cylinder lump from the Focus ST. Initially you could have it with 217hp, then 227hp from 2007. Sadly though, they’re not quite in the £2,000 arena yet. And if you do see one that cheap, you should probably walk away.

As it’s a Volvo, diesels were also an option. The 1.6 was okay, but it was the 2.4 178hp D5 that really sparkled. With 350NM it would fire the C30 toward the horizon with a solid shove, while returning decent economy thanks to the car’s small stature. However, if you get all aroused in the trousers by economy figures, the DRIVe 1.6 with start/stop is the car for you. A combined cycle of 60ish mpg is a very real number. Until the government outlaws diesels and takes your car away, of course.

As for buying one, there are plenty about. Much like the 480 of old, the world just wasn’t ready for a small, funky Volvo, despite the initial buzz when the concept was released at the 2006 Paris Motor Show. It did sell, but not nearly as well as Volvo would have hoped. It was given a face-lift in 2007 to see if it could bring more buyers in, but the corner of the showroom saved for the C30 remained relatively quiet. In the end, the Volvo C30 quietly shuffled off in 2013.

Normally on N2G, a car with a short life means dirt cheap used prices. That wasn’t the case for the C30. it seems people were actually pretty keen on the little car, they just didn’t want to pay showroom prices. As such, residuals stayed high for a long time, especially for the diesel versions. However, with age they’re starting to drop. Tap a budget of £2,000 into AutoTrader and there will be plenty to choose from. We even saw some with R-Design goodies fitted, for extra style points.

Normally we’ll try and put an amusing spin on buying a cheap car. We can’t here though, because the C30 is just good. It’s reliable, it’s economical, it’s safe (EuroNCAP five star award), it’s fun to drive thanks to a well-sorted chassis with fully independent suspension and it’s not too hard on the eye, either.

We would, hand on hears, buy on of these. For the money, it’s a lot of car. And it’s fun, a bit off the wall, unconventional almost. Traits we like in a car Just don’t offer to move anyone’s washing machine with it.