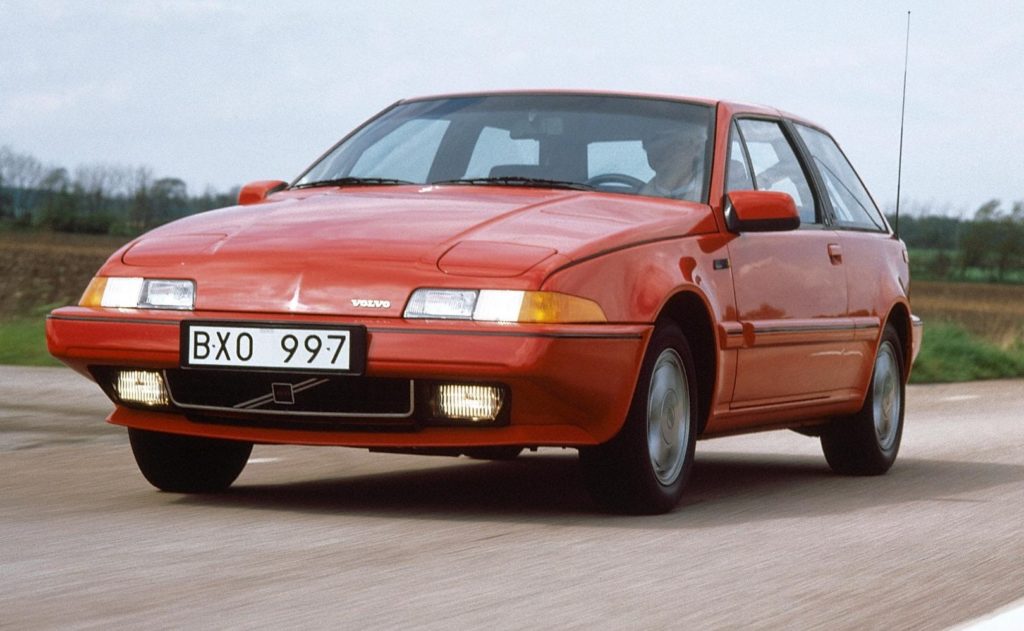 Sporty. Compact. Car. The car bit we could get our heads around, but sporty and compact? These were not attributes that we associated with Volvo in the 1980s. Volvos were big, square tanks that never broke down and could be driven through a brick wall without so much as a scratch. Hell, the television commercials even featured their wares flying off industrial structures. They were safe, they were dependable, but ultimately, they were a bit boring.

It was unfair of us to think that though. Volvo has form when it comes to making curvaceous cars, as the Amazon and jaw-droppingly pretty P1800 proved. But those cars were long forgotten by the ’80s, so we in turn forgot what the Swedish car-maker could do when it put aesthetics first. As such, when we were given the 2+2 480 coupe in 1986, we collectively fell off our chairs. Seriously, look at it.

The Volvo 480 was a bit of a babe. It still is fact, some thirty-two years on. But then, when you fit a car with pop-up headlights, you’re also entering it into the ‘cool car’ hall of fame.

The 480 was more than a pair of pop-up lights though. It was a clever and well thought out design, but then you’d expect that from a car that was in development for six whole years.

The 480 was based on the then new 440/460 platform, but as it hit the road before them, the 480 is now recognised as being Volvo’s first front-wheel drive car with a transverse engine. On top of the mechanicals, the 480 was something of an homage to the 1800ES of old. The 480 and 1800ES both shared a long nose with a short cabin that featured an abrupt ‘cut off’ glass rear end. Very stylish, basically.

Inside, the Volvo 480 could only seat four. The front was typical durable Volvo equipment, with a logically laid-out dash complete with the “electronic information centre” or trip computer to normal people, and big, comfy seats. The rear, however, was altogether more special, thanks to two sunk-down bucket like seats, separated by a chunky centre console.

Each rear seat was also adjustable. The cabin was, on whole, something of an experience to be in. Low, yet airy, while giving each occupant a sense of their own allocated space. It was… clever. But then, it was penned by Peter Horbury who would go on to become Volvo’s Chief designer.

Under the bonnet, there were two options: Naturally-aspirated or forced-induction. All engines were based around Volvo’s trusty 1.7 litre four-cylinder Renault-derived engine to begin with. The NA engine had 109bhp, whereas the Turbo packed a whopping… um, 120bhp. And the later 2.0 four-cylinder turbocharged engine kicked out, oh, we see, urm, 110bhp. Right. Though to be fair, the 110bhp car did have decent torque, in fact both the turbo engines did.

The lesson to take here is that the Turbo isn’t the be all end all of 480 ownership. Yes, you can chip a turbo up to 170bhp or so without too much fuss, but if you’re not of a modifying mindset, a standard non-turbo model is just fine and dandy. Plus, less to go wrong.

Transmission-wise, there was a traditional five-speed manual or a four-speed automatic.

On the road, the 480 was and still is a pleasant place to be. It drives well, visibility is good, you can chuck it around thanks to the Lotus-developed suspension and if you hit a tree you should be okay, what with this being a Volvo. Though this is a car well before clever stability control, curtain airbags and other safety things. The 480 is safe for an old car.

Volvo somewhat boldly stated that the 480 was for, and we quote buyers “between 25 and 40, probably with a higher than average education and with a career.” In reality it was pitched in dealerships next to the 440 and the 740, and as such, all got more confused looks from George and Mavis than it did deposits from Brent and Jessica. the 480, despite being a damn fine car and a much-needed break away from Volvo’s norm, was not a sales success. Between 1986 and 1995, only 75,000 were built and sold, and that’s not a lot for a big player like Volvo.

Volvo did toy with the idea of chopping the roof off the 480 to invigorate sales, and we with it had because the car sans lid is nothing short of sexy. Seriously, look at those lines. Alas, the project never came to fruition, that’s a crying shame.

In fact, you could look at the very existence of the 480 as being a bit of a shame. It was underappreciated, ahead of its time, too brave. We simply weren’t ready for it. But we are now, and as a classic the 480 is popular, but not so popular that you have to sell a kidney to buy one. In fact, your two grand will get you a very nice, well-looked after 480ES. Turbos might be a bit over, but really, unless you’re modifying, you don’t need a Turbo.

The Volvo 480 is a culturally significant car. It broke the mould for Volvo, it gave it the much-needed push it was looking for, it made Volvo braver, and in turn, it made Volvo into the brand it has become today. So when you buy a 480, you’re not just buying a car, you’re buying into the legacy of that car. And that’s special.