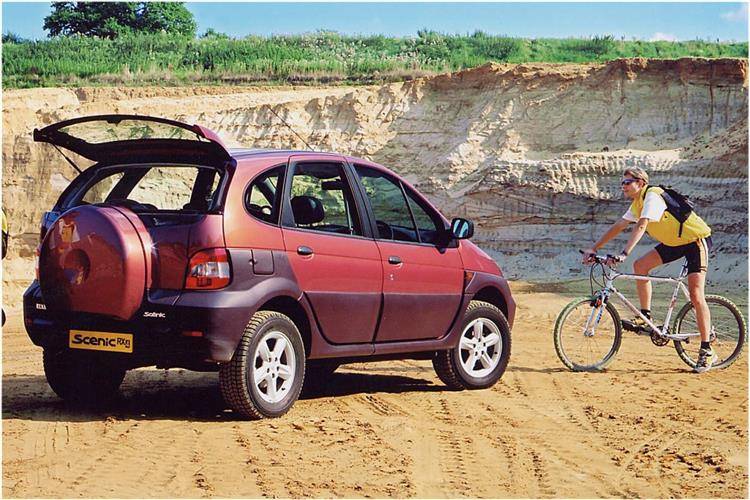 The Renault Megane was a fairly unremarkable car. Other than starring in Shaun of the Dead there was nothing to really write home about. It wasn’t a bad car, per se. It was just… average. Until, that is, Renault inflated it to bursting point and called it the Megane Scenic.

Renault probably should have left it there. It didn’t though, and in a whirlwind of cliched French noises and possibly some baguettes (what, we’re not perpetuating stereotypes) they rustled up this odd-looking sucker. Yes, ladies and gents, this is the Renault Scenic RX4. The answer to a question nobody asked.

It was tall, it looked ungainly, the heavy use of black plastics made it look like one of the cars production crews sneak into the background of films set in the near-future, and the spare wheel was mounted on the back. It was, and frankly still is, a ridiculous-looking thing. And with that, you probably think we’re going to slam it and suggest you walk instead. But we’re not. Because we actually like the RX4.

Look at that. That could be you, canoodling on the beach with a loved one, RX4 parked at a flattering, jaunty angle. THAT COULD BE YOUR LIFE. What a giddy thrill. You, the other half and an oddly-proportioned Renault that can go anywhere.

And here’s the thing. This is why we like the RX4. It is a proper off-roader. Okay, so it’s no Landcruiser, but that’s not the point. What matters is that it’s better than a lot of the so say ‘soft-roaders’ of the time.

What you have under the RX4 is a clever, yet wonderfully simple full-time all-wheel drive system. Yes, that’s a bit of an oxymoron, but let us explain. It’s clever in that 90% of the time it’s an 80/20 power split between the front and rear wheels. When the RX4 senses it’s losing traction, it sends power to the required wheel/s. This is done by a multi-disc central differential. See, clever. The simplicity comes via the fact the RX4 does it all itself. No levers, no complications, you just point it at some mud and it does the rest.

Engine wise, you had a couple of options. First, there was the 140bhp 2.0 petrol, followed by the 105bhp 1.9 diesel. The latter was obviously the more hardy of the two, but it was also considerably slower. Not that either would be prepared to set a land speed record, you understand. The derv would scuttle you to 60 in a glacial 14.8s and wuld run out of puff at 99mph. As for the petrol, it was a slightly less offensive 11.9s with a top end of 112mph. Both engines came with a five-speed manual ‘box.

On the road the RX4 was, as you would expect, a bit body-rolly, but then what would you expect. This is not the car for clipping apexes. Drive it within its limits, however, and you’ll find it to be compliant and comfy in that way that all French cars seem to be.

Inside it’s typically ’90s/’00s French fodder. So unappealing plastics and colours. However, it’s all pretty hard-wearing and more than fit for purpose. You’re going to be looking at an older car here though, so just make sure it’s all present and correct. Look for any signs of abuse by children in the back, especially in the seat and door pockets. Check the headliner for both damage and, if it has one, any signs of water ingress around the sunroof. Also, check the air-con. If the car smells musky/bitter, it can be a sign the matrix has died and that’s a costly repair.

There are other things to look for too. This is an old Renault after all. So make sure the all-wheel drive system works correctly. Admittedly this is going to be pushing test drive etiquette to the limit, but it’s important. If that clever differential isn’t working, the car is basically scrap. Unless you have insanely deep pockets.

Also, there was a recall issued for a fuel return pipe that could be worn away by the engine cover, pissing diesel all over the alternator. You don’t need to be Edd China to know that that’s sub-optimal. Same for the brake servo pipe recall, which killed the servo’s operation, resulting in the requirement of Hulk-like strength to stop the thing.

Other than that, check for obvious abuse, try and get one with history and also, if you can get one that’t not been to the moon and back, that would be better. Do all that though, and you’ll be left driving a capable, left-field, but ultimately fun car tat can pretty much do anything. And all less for two grand. Smashing.