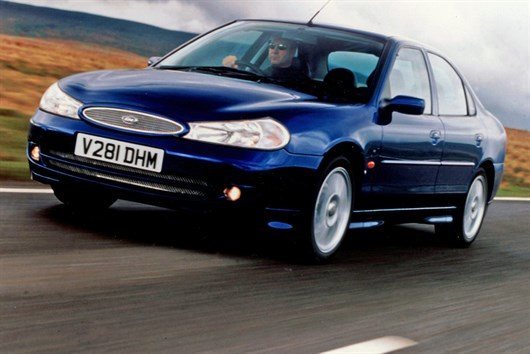 Recently we posted about the mighty Mondeo reaching the quarter of a century milestone. Sift through the history of Pollitt’s cars, and you’ll find no shortage of Mondeo-based content. Basically, we really like the Mondeo here at Not 2 Grand. There is something very ‘every man’ about it, something that makes you like it, and never judge it. It’s like a faithful old friend. Always there, always willing to serve and for the best part, always willing to plod on without catastrophic failure or concern. It is, from bumper to bumper, a good car.

Typically, we tend not to think of performance when we think of a Mondeo. And this is strange, as the legacy of the car before it, the Sierra, is plastered with Cosworth this and three-bar MAP sensor that. Yet in reality, the Mondeo has just as much performance blood in its lineage. But because it doesn’t have the C word (Cosworth, you cheeky swine) attached to it, performance Mondeos get ignored.

That’s a shame, because Ford has always been a company happy to screw some more BHP out of its cars, and the Mondeo was no exception. The Mk1 came in 4×4 2.0 Si trim, the Mk2 was available with a 167bhp V6 care of the ST24, while the Mk3 was fitted with a 3.0 V6. As for the Mk4, hell, Ford dropped the same 2.5 turbo five-cylinder lump from the Focus RS in there. The Mondeo can be, quite easily, a fast car.

This, however, is the daddy. The one to have. And also, it’s a future classic. Built in limited numbers, the Mondeo ST200 was a car that gave Ford an opportunity to show what the Mondeo could really be, and it didn’t disappoint. But then, given that the standard Mondeo Mk2 was such a good car, why would it?

The ST200 was built around the ST24. That in itself was a good thing. The 2.5 24-valve engine might have been lacking the forced induction of the Cosworths of old, but that didn’t matter. With 167bhp, it was still an entertaining drive.

The ST200 took things a bit further and in the process, squared up to the Sierra Cosworth and confidently jabbed it in the chest with its index finger. It packed 202bhp and 235Nm of torque, and that torque was available low down, so the ST200 shifted. Okay, so it didn’t have the ‘hold on and hope’ excitement of the Cosworth, but to make up for it there was zero lag. Just great big dollops of power right when you need it – all the time.

In numbers, that power translates to a 0-60 time of just 7.7s, with a a top-end of 141mph. Though being a V6, it did come at a cost. You can expect 28mpg if you drive with a featherweight foot. But you won’t. That’s not what you’re buying an ST200 for. So expect to be on first name terms with your local patrol station’s cashier.

It wasn’t all engine though. The ST200 came with a sports exhaust system, a five-speed manual ‘box, lowered sports suspension and 17-inch alloy wheels wrapped in 215/45 rubber. It really was the complete package. And that’s just mechanically. We’ve got the looks to address yet.

Ford wanted the ST200 to stand out in the showroom. As such, it made sure it has the deep bumpers, the skirts, mesh grille and rear spoiler. But even so, they were all a bit ST24. The alloy wheels were ST200 exclusive, but that wasn’t enough. So Ford painted them Imperial Blue – a colour not available on the ST24. There were some (500 allegedly) white ones, but these were intended for Police use. Some made it into private hands though, as the Old Bill didn’t have deep enough pockets for all 500.

Inside, the ST200 got blue bits everywhere, including most of the dash inserts. The leather-wrapped steering wheel got some blue, too. As did the lush Recaro leather seats and rear bench. It’s a law that you have to play Eiffel 65’s ‘Blue’ when driving an ST200.

The exclusivity didn’t stop there. In total, Ford built 6,500 ST200 Mondeos in ’99 and ’00. That makes them relatively rare. If you want rocking horse faeces levels of exclusivity, find one of the 600 saloons built. Or one of the estates. Though we wish you the best of luck with that.

Still, those numbers are somewhat moot now, as many ST200s have ended up in the Ford dealership in the sky. The Mondeo’s propensity for rust combined with ‘Ford people’ sentencing them to death by abuse and/or dubious modifications means there are only around 900 left, with half of those on SORN according to HowManyLeft.

We’re quite fond of calming a car is a future classic, but with this, it really is. Performance Fords will always have a following, and while the Mondeo was looked down on as a performance vehicle, they are now starting to appreciate. As such, it won’t be long before the ST200 – given its dwindling numbers – will be way more than two grand.

With that in mind, you should buy one. If you do, though, please keep it standard. The ST200 is a special car, and with the exception a Citrine Yellow Mk1, the rarest of all the Mondeos. They deserve to be saved and cared for. Though if you really, really must get your spanners out, you could build the ST250 concept. Just drop in a 3.0 V6, bolt a supercharger to it and add some silver paint. Job done.