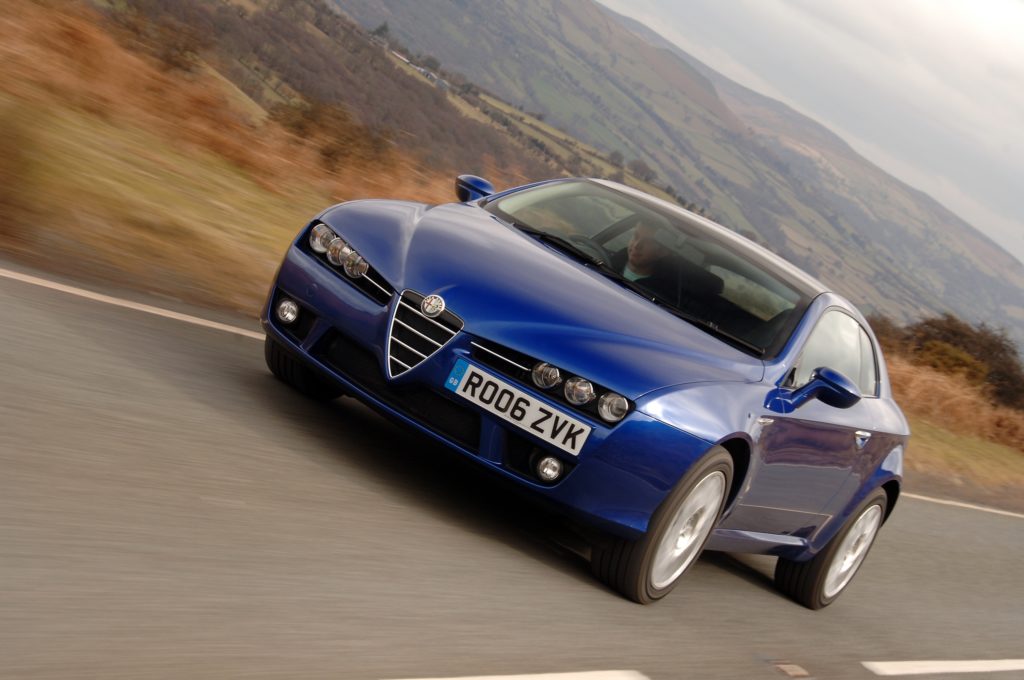 It has finally happened. The gorgeous Alfa Romeo Brera has dipped its toe into the murky water of Not £2 Grand territory and like some sort of poorly crafted B-movie horror fish, we have latched on and we’re doing our best to pull it further down. or something like that.

The site, in case you haven’t seen, is somewhat awash with offerings from Alfa Romeo. While the cars are undoubtedly gorgeous, there is the inescapable reputation of mechanical maladies and electrical gremlins. This has always had a negative effect on the value of an Alfa because, frankly, people are scared of the potential for failure. But more fool those people. What the timid fail to see is that an Alfa with a few years on the clock is an Alfa that has, usually, already done all of its ‘going wrong’. As such, we can scoop up a beautiful bargain that someone else, another poor previous owner, has already spent time and money sorting.

The Brera came about by accident. A concept car was unveiled at the 2002 Geneva Motor show, and the motoring masses fell over themselves to get a closer look. The Brera concept was nothing short of a work of art, with stunning lines penned by the talented Giorgietto Giugiaro of Italdesign. Under the sculpted bonnet hid a V8 from Maserati with as near as makes no difference 400bhp. It was a triumph of design, and it showed the world that when it came to making cars to fall in love with, Alfa was still very much at the top of its game.

Of course, concept cars never actually make it to the road. Instead, we get a car of the same name, but one that looks like a blind toddler was asked to draw the concept. In the dark. While drunk. So when Alfa did indeed confirm that a Bera would be happening, we held out little hope that it would look anything like that bold, adventurous concept.

However, we were wrong. In 2005, again at the Geneva Motor Show, Alfa pulled the covers off what would be the production Brera and while it was small, and lacking V8 punch, it looked identical to the concept. This made the motoring world happy.

That there is the concept car, and as you can see, the road car is pretty damn close to that in terms of looks. Okay, so it’s not a carbon copy, but put the two alongside each other and you can tell they came from the same pen. And that’s what matters. The essence and bold ideas of the concept weren’t lost in the name of making it production friendly.

Alfa had to adapt the production car, mainly so production was more cost effective. As such, the Brera is based on the chassis of the 159, but that’s no bad thing as the 159 was a damn fine machine. And while it was smaller than the concept, it was still a large car when compared to its peers. Marketed as a 2+2 coupe, the Brera had and still has some serious road presence.

Under the bonnet, the UK Brera started life with three options. There was the 2.4 five-cylinder JTD diesel, which with 200bhp and more torque than a Scania, was no slouch. It was a bit laggy, but such is the price you pay for a blown diesel.

On the petrol side of things, there was the mighty 3.2 V6 with 260bhp. Rev this engine with giddy enthusiasm and every man within a two mile radius will suddenly become erect. It’s a scientific fact, given that it’s one of the most beautiful-sounding engines to ever be built. But alas, you’ll never know, as you can’t afford one.

The Brera is only just bobbing in and out of the Not £2 Grand waters, and when it does dip to our grasp, it does so with the 2.2 four-cylinder naturally-aspirated engine. But don’t be glum, it’s still a good engine. It packs 180bhp through the front wheels, it can shuffle the Brera to 60mph in 8.5 seconds, and it’s relatively cheap to run, too. Plus, it’ll be mated to a six-speed manual. Though be warned, the gearboxes fitted the Brera aren’t great, with many drivers complaining that they’re a bit too notchy.

Sadly the notchy ‘box wasn’t the only complaint facing the Brera. The steering, while direct, was completely lacking in feel thanks to being a little over-assisted. Then there was the way the Brera handled. it was planted enough, and as such, it was easy to gel with. However, the suspension was far too soft and as such, the car liked to roll through the corners.

But here’s the thing. If you buy a Brera under the desire to own a sports car, you’re going to be let down. Buy it as a comfortable, stylish and cosseting GT car and you’ll be laughing, because that’s what the Brera is through and through. This isn’t a car to get from A to B in the fastest time possible. It’s for getting there in comfort and style.

And get there in comfort you will. The 2=2 cabin of the Brera was and still is wonderfully appointed. Okay, so the plastics aren’t the best, but the leather trim is gorgeous, there is plenty of kit to keep you happy, visibility forwards is good (though it’s crap out the back thanks to those Brobdingnagian C-pillars). The dash is refreshing in that it’s all angled – centre console and all – toward the driver. You get the impression the Brera wants you to be integral to the drive, to be part of the car, and that’s pleasing.

Rear seat passengers aren’t going to like you if they’re over four-foot tall, but if you’re buying this to lug people around, you should probably consider a 159 instead. The rear seats of a Brera are for small people or emergency lifts. As for the boot, that’s ample and usable, though the high floor and even higher entry point mean you won’t be lugging a washing machine in there. Thankfully.

Ont he whole, the Brera is a car you should consider if you’re looking for something fun, something standout and something with seemingly endless amounts of style. It has aged fantastically well, and surprisingly for an Alfa, there are no major mechanical issues to be aware of. Just buy one with decent history, and with mileage that doesn’t rival the Space Shuttle and you should be golden.