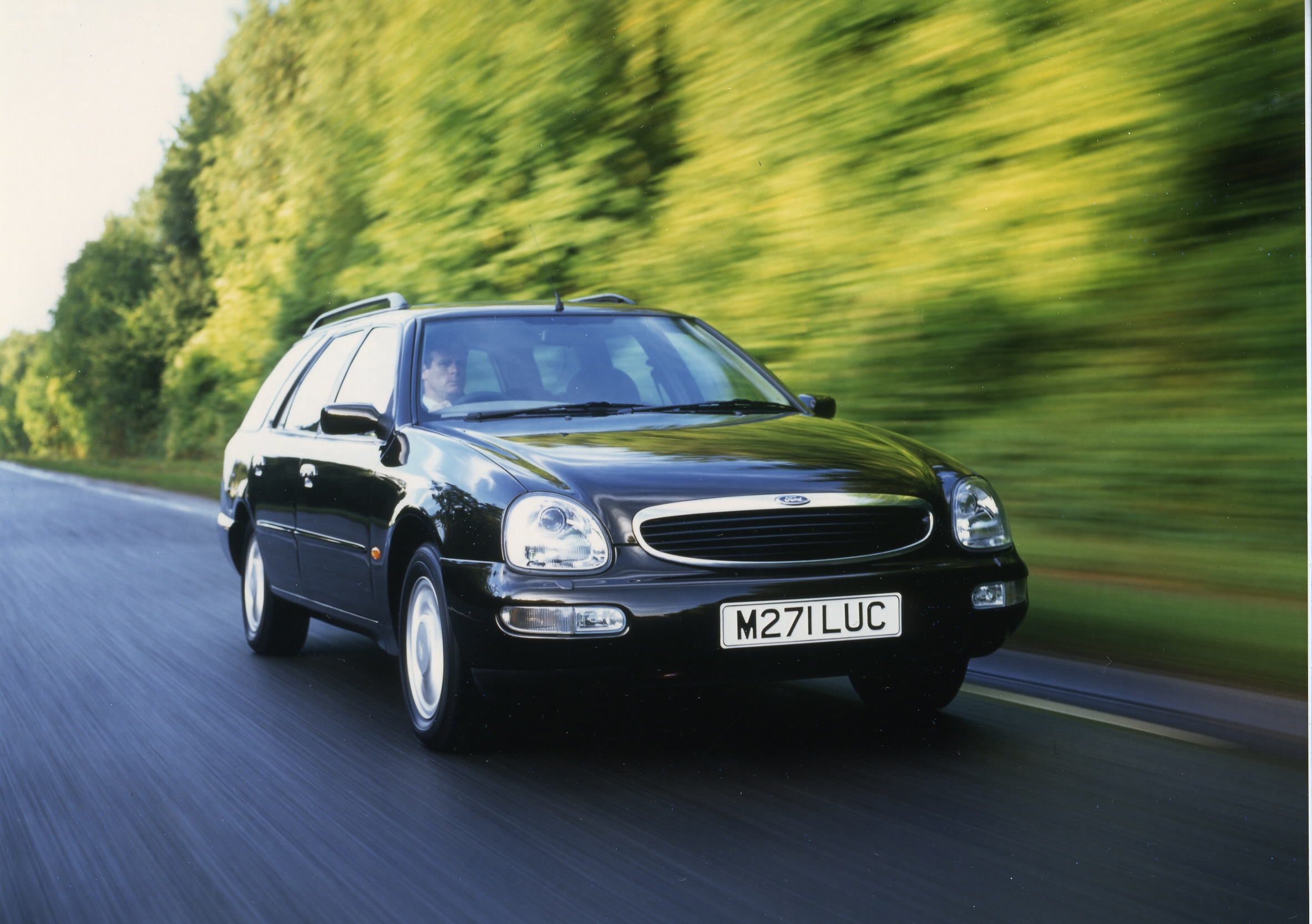 No, we’ve not taken leave of our senses. Nor have we had nine pints of strong cider. We’re really doing this. The Ford Scorpio is a car you should consider, because its merits significantly outweigh the minor issue of it having a face many considered only a blind mother could love.

Though note the inclusion of the word “considered” there. We’re of course talking about the endless name-calling the press subjected the poor Scorpio to. Here at N2G, we actually quite like the way it looks. And that’s nothing to do with getting older. We liked it when it came out.

The first version of the car, named the the Granada Scorpio rolled out of dealerships in 1985. It was designed to take on the big saloons from the likes of Mercedes and BMW. And on paper, it had the goods. It was big, it had some decent power from the V6 and it drove well. In reality though, it couldn’t match the German offerings. The engines were weak at the lower and of the range (seriously, Ford put a 2.0 in this behemoth) and the build quality left a lot to be desired. Then there was the fact they’d rust into oblivion if you drove them past a puddle. Not through. Past.

The styling was also an issue – the ‘bug eye’ model wasn’t the only one with image worries. The first Granada Scorpio used the same basic design philosophy as the Sierra, Ford’s class-leading mid-size car. The only problem was it followed it a bit too closely. The resulting car looked like a Sierra that had eaten a few pies.

Despite being a fat facsimile of the Sierra, the Granada Scorpio did sell well. The diesel engine was agricultural but usable while the V6 Cosworth engine was a refined powerhouse. Also, in estate guise the Granada Scorpio could swallow a small town. So it had practicality nailed. It wasn’t the cash cow Ford would have liked it to be, but it was respectable. To such an extent that Ford green lit the project for a new version in the mid-90s.

Ford wasn’t willing to go bonkers with the piggy bank though. As such, the new 1995 car was more of a heavy rework of the old version rather than something completely new. In the mid-90s Ford was losing traction in the luxury saloon sector and it knew it. Other cars like the Mondeo and the Escort were bringing in plenty of cash, so it was decided that spending untold money on a luxury motor would be fruitless. Instead, Ford counted the pennies and used what it could from the old Granada Scorpio. Except the name. Ford binned the Granada bit. The new motor would simply be the Ford Scorpio.

The Ford Scorpio. Not to be confused with…

…Hank Scorpio from The Simpsons.

Underneath that unique aesthetic you’ll find the same basic structure as the Mk3. Though the suspension was revised to offer more comfort and stability over that of the outgoing car. But that’s about it really. Like we said, Ford didn’t go mad. As was evidenced by the engines. They were all from the old car, bar one. You had:

There was a brand new engine for the new car. Namely a 2.3 four-cylinder 16v petrol. In reality, Ford was sticking it in the Galaxy of the time, but it wasn’t a popular choice. It worked well in the Scorpio though. Far better than the aged 2.0 engines, that’s for sure. However, we all know why we’re really here. It’s for the Cosworth engine. If the Scorpio never had it, the car wouldn’t be here. It’s really the only one worth buying.

The 2.9 Cosworth engine was and still is a masterclass. It was built around the 12v version by professional engine twiddlers, Cosworth. They took the 2.9 block, threw away the single-cam cylinder heads and replaced them with twin-cam versions. That made the Cosworth V6 a quad-cam engine. Some Ferraris have quad-cam engines. So that’s cool.

Cosworth also machined the old block to make it stronger, further upping the reliability. And ran with a hydraulically tensioned timing chain. No need to worry about snapping belts here.

That engine was actually available in the late Mk3 cars. In that application, it was known as the BOA. For the Scorpio a BOB version was fitted. This featured twin timing chains along with a variable length intake system for improved power delivery. The result was a reliable and accessible 201bhp. Not bad, Cosworth, not bad. And if you think it’s just a lazy V6, think again. Supervan 3 has a Cosworth V6 fitted. And that’s not slow, despite being a van.

The Cosworth engine could be found in the Ultima model of the Scorpio. As you can imagine, that specification was, um, the ultimate. Alloys, metallic paint, air-con, cruise, electric everything and the comfiest leather interior known to man were all present. This is the model you should be looking out for.

The Scoprio Ultima is a car that should be remembered. For effortless mile munching, you can’t get much better. It’s powerful, it’s smooth and it’s outrageously comfortable. It is a wonderful car from bumper to bumper. Buy an estate and it’ll be the most practical car you ever buy.

Now, before we wrap this up, we have to talk about the way the damn thing looks. To our eye, it’s really not that bad. But having said that, we like big, lazy American saloons. And despite Ford not selling this model in America, that’s what it was going for. Sadly though, we weren’t ready to adopt it in the UK so the car sold badly. Not that Ford would admit it. In fact, Ford said it sold beyond expectation. Though it didn’t say what that expectation was. Three maybe?

Sadly, a great many Scorpios have gone the way of the banger track. And yes, we’re including the Ultima in that. It’s hit the surviving numbers hard, and now there aren’t many left. As such, prices are starting to climb. This ugly duckling might not have blossomed into a swan, but as the years roll by, appreciation for them is growing. The Scorpio is a future classic, we can assure you. So now is the time to buy one. Don’t judge it by its face, the poor thing is far more than that.