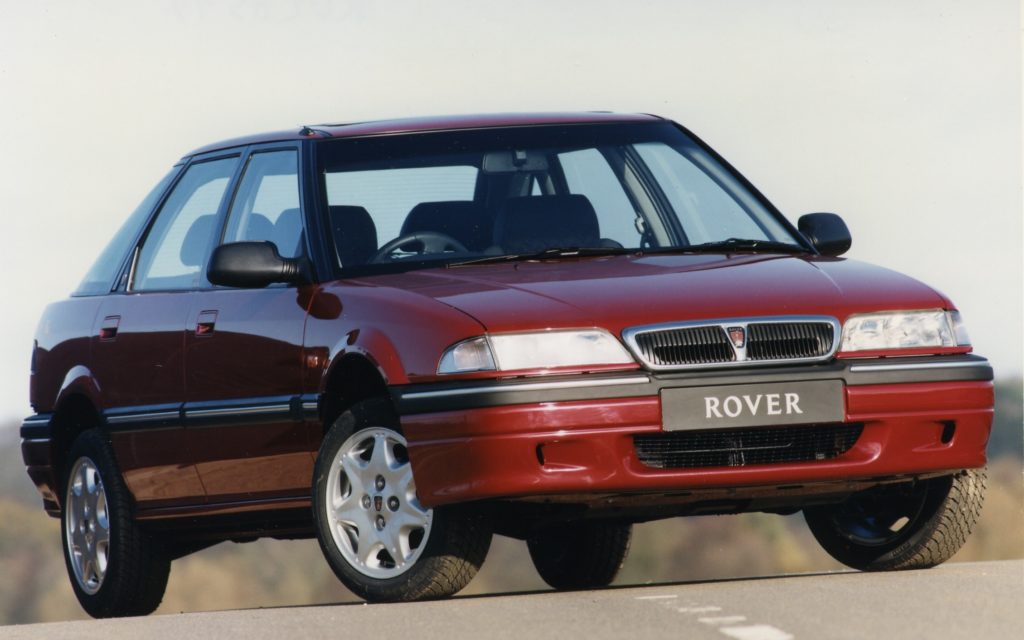 Yeah, another Rover. We like Rovers. You should know this by now. Not only to we have the mighty Project 800, we also celebrate an automotive autobiography filled with Cowley and Longbridge creations. Maybe it’s a generational thing? Maybe we’re just weird? Or maybe it’s because we’ve never subscribed to any form of badge snobbery and as such, we see Rovers for the decent cars they were. Yeah, you might scoff, you might think you’re being funny* by cracking a head gasket joke, but it’s all futile. Our love, much like Celine Dion’s heart, will go on.

And before we get into any Titanic/rust jokes, let’s move on. We’re looking here at the mighty Rover R8. This is one of those cars that people love to mock, but more fool those people. Get under the skin and you’ll see that the R8 was not only a good car, it was also a game-changer as well as being a car that the rivals simply couldn’t stack up to. Not only that, the R8 was a huge sales success, but people like to forget about that and instead shout HEAD GASKET like a child full of Red Bull.

*You’re not funny. We own a Rover. We’ve heard them all. Pack it in. You’re about as funny as grit.

The R8 was an important car. The main reason for that came from it being the first car to be built by the then newly privatised Rover Group. Expectations were high and failure simply wasn’t an option. The R8 had to be a success, the very reputation of the company depended on it. And oh how the outsiders and rivals hoped it would fail. And to be fair, they had good ground on which to base their hope. You might think of the R8 as being a ’90s car, but it’s not. It was developed in the ’80s and released in ’89. And in ’89 we still had the Maestro and the Montego. The chances of Rover suddenly reinventing the wheel seemed bleak when based on such mundane models.

The R8 was also the car to usher out the average SD3 200 series (the one Hyacinth Bucket had). Rover couldn’t wave the Honda/Rover collaboration as a new thing for the R8, either. It was in place, albeit in a much more fluid sense, with the Bucket version. And look at that.

Before the R8 was even a sketch, the odds were stacked against it. Yet, because Rover wasn’t as crap as your Dad would have you believe, the odds would very quickly be overcome. The R8, when launched in 1989, knocked everybody’s socks off. It was, and still is, a belter.

Rover wanted to be seen as a premium brand, and that meant it would need a premium engine. Yes, some like the early 1.6 would come from Honda, but for the most popular 1.4 Rover would roll out something completely new. Yes, we’re talking about the K Series, an engine that Rover put two hundred and fifty million quid into developing. That’s a lot of money, but it was money well spent. It had been under development since 1983 and Rover was ready to unleash it on world. The engine was something of a point of contention though. Previous borrowing from the Government brought with it a stipulation to bin the engine, and instead just use Honda’s. Rover’s Harold Musgrove fought to keep it, and in the end he won. The K Series saw complete development and was slotted into the R8 in 1,396cc guise.

This clever little engine feature double overhead cams, sixteen valves, lean-burn technology and deeply impressive fuel economy. It was as tight as a military sewing machine and was lauded on its arrival. Sadly, Rover was yet to discover the weakness that was the head gasket. But remember, it was just that head gasket. When Rover folded, it had developed a new part that would have cured all ills, but alas, it was too late.

Other engines in the range included a 1.6 from Honda, as well as the M Series and in turbo cars, the T Series. This range of engines made for an exciting lineup. Especially when you consider the antiquated, rattly, slow units you would find in a Golf, Escort or Astra of the same vintage.

Then there was the way the R8 looked. We think it still looks sharp today, some thirty years on. Imagine how buyers must have felt when this thing rolled into showrooms in the late ’80s? It was low, lean and perfectly proportioned. There were greater expanses of glass, the two-tone body worked a treat, the lines were crisp and fuss free, but also purposeful and firm. Some were keen to point out it was too low, it was too sporty dare we say. but Rover didn’t mind, it wasn’t targeting the customers of old, it was after new, young blood.

It’s a common mistake to think that the R8 is just a Honda, but in reality it’s the other way around, and that’s another thing that makes the R8 special. The way it looks has always been a British design, it’s just sat atop Honda underpinnings, which is where the Honda stuff best benefited the R8.

MacPherson suspension could be found up front, while out back there was a multi-link independent arrangement. Yes, this ate into the footprint of the car and compromised boot space a little, but so what, it drove brilliantly. Even a hum-drum diesel was a riot to drive. A 220GTi or 220GSi complete with turbo – oof, what a thing. The steering, if a bit ‘locky’ at four turns, was sharp and direct. Turn in was lightning fast, and the grip was astounding. Some press reviews even said it was prone to a bit of lift-off oversteer on the limit. Normally a bad thing, but in the context of a Rover, shit, that’s exciting!

The R8 would also be a diverse car. Again, this was a reflection of Rover’s desire to bring in new blood. And how do you do that? You offer them everything, that’s what. In 1989 we could have a five door hatch, but that soon changed. We were offered a three-door model (which became the natural base for the GTi and GSi models), there was a convertible and there was even a two-door coupe in the form of the Tomcat.

But Rover wasn’t done. In 1990 it introduced the 400, which was basically a three-box 200 or later, a wagon, which was highly unusual for Rover. It looked good though, as we can attest, we’ve owned three including a 420GSi. Though the 420GSi Turbo was the one you really wanted with the best part of 200bhp from the same T Series 2.0 found in the Rover 800 Vitesse.

So why should you buy one? Because you’re better than the fools who openly mock Rover because it’s ‘funny’. The R8 was and still is a good car. Hell, What Car? named it Car of the Year in ’90, and that’s not an award they throw about for fun. Furthermore, the R8 was a sales success, it was a car that pushed Rover into a new light, in front of a new audience, it revitalised the brand. The Rover R8 is not the Rover the failed at the hands of the Phoenix Four in the mid ’00s. It is from a different, more optimistically-futured time.