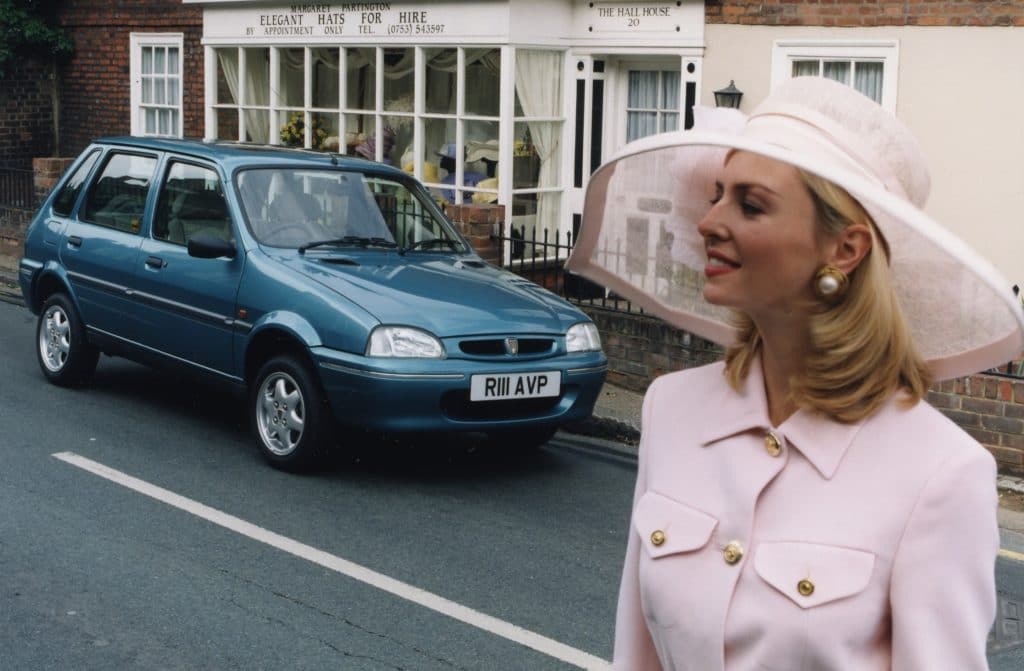 Ah yes, the Rover Metro. A care so hopeless that even we, self-appointed ambassadors of the Rover brand, can’t endorse. It looked okay, and it had a decent range of twin-cam, 16-valve engines. It was built reasonably well, for a Rover. It was, actually, a rather good take on the concept of a city car.

Oh, and it would kill you as soon as look at you. Seriously, you’d fare better in a tickle fight with Edward Scissorhands than you would if you crashed a Metro. It had all the structural integrity of a motorway services egg mayonnaise sandwich. Some later models were offered with an airbag, but it was moot. By the time it went off, the steering column would be getting intimate with the back of your skull. It was not good. But we’ll get to all that later.

In the interest of fairness, we should probably talk about the Metro a bit. Without mentioning the fact is was about a safe as putting landmines in your boots.

The Austin Metro, or the Austin Mini Metro, or the Mini Metro, or whatever the guys at BL decided to call it, was meant to be a direct replacement for the Mini. They penned a design, which was code-named ADO88 (Amalgamated Drawing Office 88-inch wheelbase) and rolled it out in front of some customer focus groups. Said focus groups got angry, swore at the designer’s mother and stormed out. To bewildered shock of BL suits, the public didn’t want a replacement for the Mini, much less one that looked like a microwave with wheels.

BL still made the metro though, but only after a redesign to make it a bit bigger. Though it was still largely Mini oily bits underneath. Sold alongside the Mini, the Metro actually did find a home with thousands of buyers, to such an extent that it was considered a huge success. The key, as BL found, was to not replace the Mini. Avoid that, and all was well.

The Metro was popular because it was all things to all men. It was available as three or five-door, or as a van. You could have a teeny 1.0 or, in MG guise, you could have a 1,275cc with a turbo strapped to it. It was a versatile little car. In the ’90s, it was given a slight face-lift before being given a complete overhaul for 1990, which gave us the deadly R6 version.

Things started out well for the new R6 Metro. It was leaps ahead of the old car in terms of fit and finish, it was offered in an impressive number of trim options, the styling was in keeping with the Rover brand for the time and the new range of 8 and 16-valve K Series engines were far better than anything found in rival cars. In fact, the Rover Metro was so good, What Car? awarded it “Car of The Year” in 1991. And the guys at What Car? don’t just give that away.

Yes, Rover had knocked it out of the park with the R6 generation Metro. It was a cheeky, fun little car that appealed to a huge cross-section of buyers. There was a 1.1 petrol for running about, there was a 1.6 16-valve with 100bhp in the GTi model and there was even a 1.4 diesel for the buyer who only wanted to fill the tank once a year. Furthermore, the Metro found a home on the track, too. That 100bhp engine could be screwed to 130bhp without too much fuss, though for the serious speed demon, a 1.8 K Series would fit, taking the Metro to giddy levels of power.

In 1994, the Rover Metro became the Rover 100, to bring it in line with the rest of Rover’s brand strategy. It gained a chrome grille, some trim levels were jiggled about, some colour options were added, but by and large it was the same car. The same happy little car that gave those looking for a smaller set of wheels the chance to won something a bit, posh? Hyacinth Bucket types, probably. But whatever, the 100 made them happy, and the sales made Rover bosses happy so everyone was, um, happy.

In 1997 EuroNCAP (The European New Car Assessment Programme) appeared. A new, stringent, methodical and above all, independent body that would test the crash safety of as many European new cars as possible. Formulated by the Swedes, this new set of crash tests would become the new benchmark on which people would base their in-dealership decisions. EuroNCAP made us pay attention to safety.

Rover watched as other cars were shot at a wall at 40mph as part of this test. The Fiat Punto got two stars out of five. So too did the Citroen Saxo. The Ford Fiesta grabbed three of these new stars. Rover had its own crash test facility at Longbridge, so it wasn’t too worried. Plus, this EuroNCAP thing wasn’t going to be taken that seriously, right?

Rover didn’t have to play. EuroNCAP wasn’t and still isn’t mandatory. However, it was and still is independent. Meaning it would go out and buy popular cars, only to shoot them at a wall. EuroNCAP did indeed buy a 100, and there was nothing Rover could do about it. It simply wouldn’t have known which car it was.

EuroNCAP crashed it. It got one star.

The news spread like wildfire, with stories about the 100’s poor crash rating popping up all over the media, and we’re not just talking about a stern piece on Top Gear by Quentin Wilson. It hit the mainstream media. And in doing so, it killed the 100 in its tracks before it could kill anyone on the A14. Sales fell flat almost overnight, customers who had just bought one were pounding on the glass at Rover dealerships. It was a bad time. Ultimately, Rover killed the car off, stopping production completely.

Some of you, hiding behind a Rover-badged sense of eternal optimism, may be thinking that one star isn’t the worst. After all, some cars have recently been awarded zero stars, like the Punto. And while that’s true, it’s only because the goalposts have moved. You see, EuroNCAP now includes passive and active safety features. back in 1997, they didn’t really exist. As such, the score was based largely on the physical strength of the car. And the 100 didn’t have much more strength than a bag of Monster Munch.

Today, the Metro/100 has enthusiastic following. Presumably from people who have ‘wear a dashboard as spectacles’ on their bucket list. It’s still a popular track car (thankfully those cars tend to have roll cages) and it’s also got a solid following in the world of modified cars thanks to the tunability of it – 1.8VVC K Series for example, so you can really commit to hitting that wall.

To each their own. The Metro/100 might not be the safest car in a crash, but then, how many other older cars – that people still drive on the regular – cope in a crash? We’re willing to bet our 800, which was never tested by EuroNCAP, wouldn’t score too highly. Yet still, we love it. It’s all relative. The trick, we suppose, is to not crash at all. Or if you do, crash into one of those big fluffy dogs, or a branch of Pillows R Us or something.