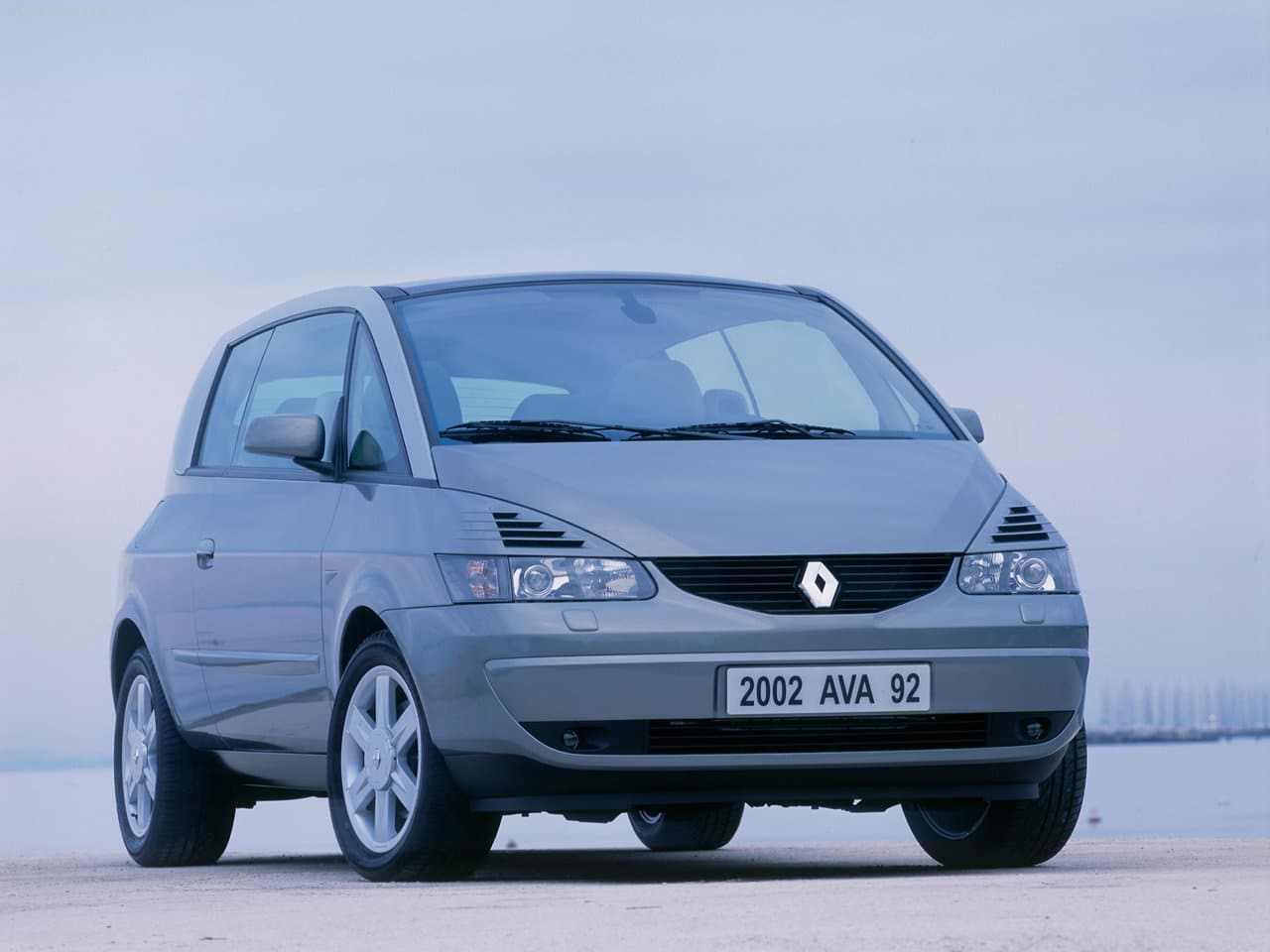 This isn’t the first time we’ve dipped our toe into French waters. First of all, we went there on holiday in 1998. Then we featured the Renault Twingo, and of course, the delightfully bonkers Vel Satis. We’re stepping it up a notch now, with a car so nuts it makes the Vel Satis look like the accountant at a paint drying factory. Enter stage left, the Renult Avantime.

Ahh, the Renault Avantime. It’s so very French. And that’s no bad thing, because the French are great at making quirky, fun cars. The kind of cars that we like, because they push your tiny budget even further. In fact, you’re getting a lot of car for your dosh here – the Avantime is massive because – fancy car designer talk aside – it’s basically a Renault Espace Coupe.

Now the words ‘Espace’ and ‘coupe’ aren’t normally seen together. In fact, they’re never seen together, such is their juxtaposition. That wasn’t going to stop Renault from pairing them. No, the chaps in France had a brainwave. Well, actually, it was Phillippe Guédon, head of Matra’s automotive division, who thought the kids who grew up riding around in an Espace would want one of their own when they grew up. But they might not have kids themselves, so it had to be cool and exciting. Whatever ended up on the drawing board was going to be exciting. Especially as Matra were responsible for such beauties as the Rancho…

In reality, that was a stupid idea. Generally speaking, the kid-free car-buying demographic seldom buys a car that can still fit a family. However, that didn’t stop Renault and Matra from knocking the Avantime out. And we’re glad they did, because while odd, the Avantime is a wonderful design classic. It looks like it shouldn’t really exist, by which we mean it’s utterly pointless. But that just adds to its brilliance. It exists because it can, not because it needs to. It’s a weird and off-beat vision that made it from pencil to tarmac, and that is very rare thing in the car world.

So what did you get with an Avantime? Oddly, you only got four seats, unlike the 38 you’ll find in a normal Espace. But they’re big, Bridge of Weir leather leather seats that cosset and comfort the backs and bottoms of those lucky enough to sit in them. You also only got two doors – it’s a coupe after all, sort of. However, given the sheer size of the doors, a normal hinge system would have meant a runway would be required to fully open the doors. As such, Renault came up with the ‘double-kinematic’ hinge system, allowing the door to swing open without needing a mass of space. It’s clever.

You also got glass, and lots of it. The Avantime doesn’t have any B-pillars, favouring an expanse of glass instead. Along with the roof, which is panoramic. They all open – roof and all – to offer occupants and ‘open air’ experience. And what an experience it is.

You’d think the absence of metal in favour of glass would make the Avantime about as safe as paper cup in a crash. Thankfully, that’s not the case. As you’d expect from Renault, safety was a key concern. It took the company two years to engineer the Avantime’s structure to a level of safety they, and governing bodies, we’re happy with. So it’s a tough cookie, and it’s full of air bags, too. Plus, it used the same body on chassis design as the Espace, which offered a degree of strength. Go on, crash one, we dare you.

Engine wise, we got a choice of three. There was a 2.0 inline-four petrol, a 3.0 V6 and a 2.2 diesel for the minicab drivers. None of them were particularly sparking engines, especially when saddled with the 1,600kg weight of the Avantime. But still, they moved it a long moderately faster than a glacier. And the V6 made a good noise, though it did also drink all the fuel. Basically, if you get giddy for MPG figures, this sucker isn’t for you.

Sadly, the Renault Avantime was a huge flop commercially. In lost a huge amount of money for Matra, forcing it to pull out of building the damn thing. Furthermore, consumers simply didn’t know what to make of it, or why it even existed in the first place. It was an oddity to stare and point at, not actually buy. People simply weren’t that brave. As such, the Avantime lived a short life of three years from 2001 to 2003, during which time 8,557 were built.

Now though, it’s one of those cars that people like and appreciate. As we said earlier, cars like this seldom make it to production due to all the red tape, market research and so on. The Avantime didn’t have any of that though. Renault had an idea, and it pushed ahead with it. And that should be applauded. The Avantime is an important, memorable and fundamentally enjoyable car. Go on, live a little, get one bought.