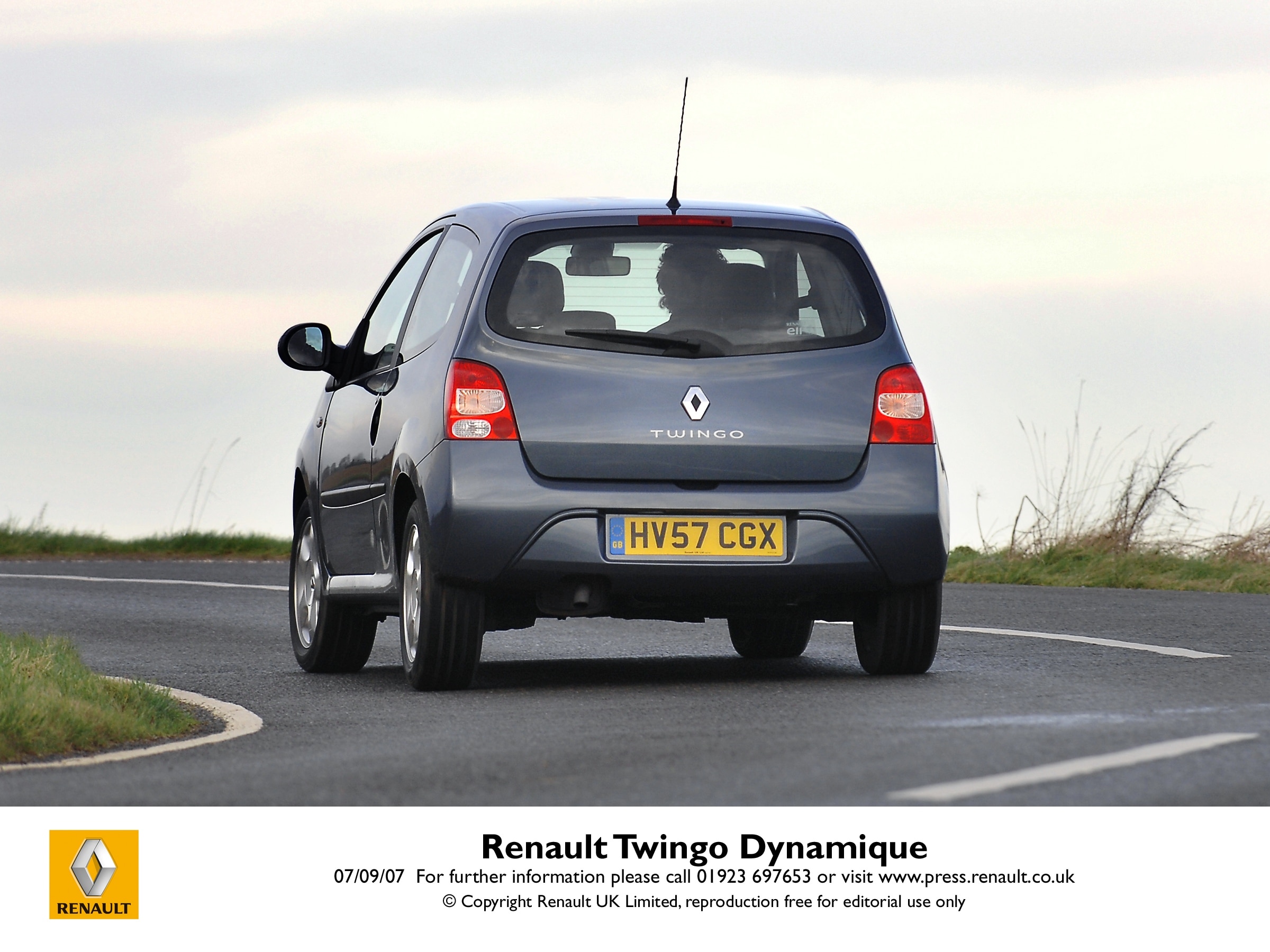 We first saw a Renault Twingo in Greece, circa 1995. We were quite taken aback by its quirky looks, something akin to a stoned Kermit the frog. It caught our eye because we hadn’t seen anything like it before. It looked fun just parked up, with its silly little face staring out onto the blue Greek sea. But that was the last we ever saw of it, because we didn’t get it in the UK. Maybe our upper lip was simply too stiff to humour the quirky French hatch.

It’s a shame the first Twingo was never engineered for right-hand drive. Renault sold 2.4 million of’em in Europe, thanks in no small part to how well the cheeky city car was received by the motoring press.

Look at that silly little face. The car that is, not the rotund chaps.

This is the limited Sumo edition. Can you see what they did there? Can you?

Happily, Renault decided to let us have the Twingo in 2007, or should we say the Twingo II. It didn’t look quite as cheeky as the first incarnation, but it had a certain charm. It remained microscopic in size and most importantly of all, it was still good fun.

It borrowed the basic chassis from the Clio II. While that might not be the most dynamic car in the world, it was still tight and chuckable. We have a 1999 Clio II 1.4 and it’s fun to throw about, and that’s with 109k on the clock. Strap the smaller, lighter Twingo body to it and you’re in for a good time. Plus, the Twingo II is somewhat easier on the eye. The Clio II is not a pretty car.

By the time the Twingo II hit UK shores, we were demanding more form our small vehicles. They might only see the school run and the car park at ASDA, but we we’d be damned if that meant they could be boring. We still remembered the Austin Metro and we WERE NOT willing to go back to that hell. No sir.

The Twingo II just scraped through the funky’o’meter at Dover. It wasn’t quite as swish as the Fiat 500, but it wasn’t bad. So we let it in, and we bought lots and lots of them. Well played, Renault.

Mechanically, it was a simple beast. But not as simple as the Twingo I. We were given struts and coil springs up front, while the rear featured the traditional coil and beam setup. Add in rack and pinion steering with electronic assistance and you’re left with a platform that’s comfy, predictable, but still enjoyable. Perfect small car stuff.

In terms of the suck, the squeeze, the bang and the blow, we only got one option on the Twingo II’s initial launch. A 1.2 petrol with a dizzying 74bhp. It was enough to shove the Twingo II along though, what with it weighing about as much as a hamster fart. Or 950kg if you want an actual number. Still, that meant the engine needed to be worked considerably to get the most out of it, so if you’re not a fan of screwing plenty of revs out of an engine, this might not be for you.

Frankly though, we’re a bit miffed we didn’t get the 1.2 turbo that France got. What’s that all about, France? Eh? Thought we were mates?

When it comes to the Twingo II’s innards, it wasn’t too bad. Good stuff included the funky view for the driver, which included a rev counter and digital speedometer. Then you had the rear seats which could move forward and backward, independent of each other. Handy if you overspend at Aldi and need that boot space, of which there isn’t much.

The stereo, in a bid to be appeal to the modern, young motorist, had three methods of music connectivity. You had aux, USB and Bluetooth, the latter working with the phone function, too.

Sadly though, the seats were a bit rubbish in the support department. The plastics were, um, very plasticy and the steering wheel looked like it had been made by a 13 year-old design technology student. But, meh, the car was cheap.

Renault also gave us the mighty 1.6, 133bhp RenaultSport version of the Twingo II. It was the ultimate on hot hatchery. It had better seats, more dramatic styling and according to Top Gear, it could fit Ross Kemp in the boot.

Sadly though, these haven’t quite dipped into the sub £2k market yet. We have seen one, but that was a rare find. You’ll have to wait a bit longer for that. Soz.

RenaultSport version aside, the Twingo II is a cracking little car. It’s well within the £2,000 budget (we’ve seen them for as little as £1,200) and it should, thanks to being a relatively modern car, offer a good few years of faithful service. If our 1999 Clio is still running, the Twingo should last an age.

Cheap to run (50mpg is easily achievable), safe (EuroNCAP gave it four stars) and goof fun to drive, the Twingo II would be a welcome addition on any driveway. Though it would shine as a second family runabout or a reliable first car, too. You should buy one. Go on, off you pop.

Just a word of warning though. Don’t let Nicola from Girls Aloud near it. No, really. This happened…