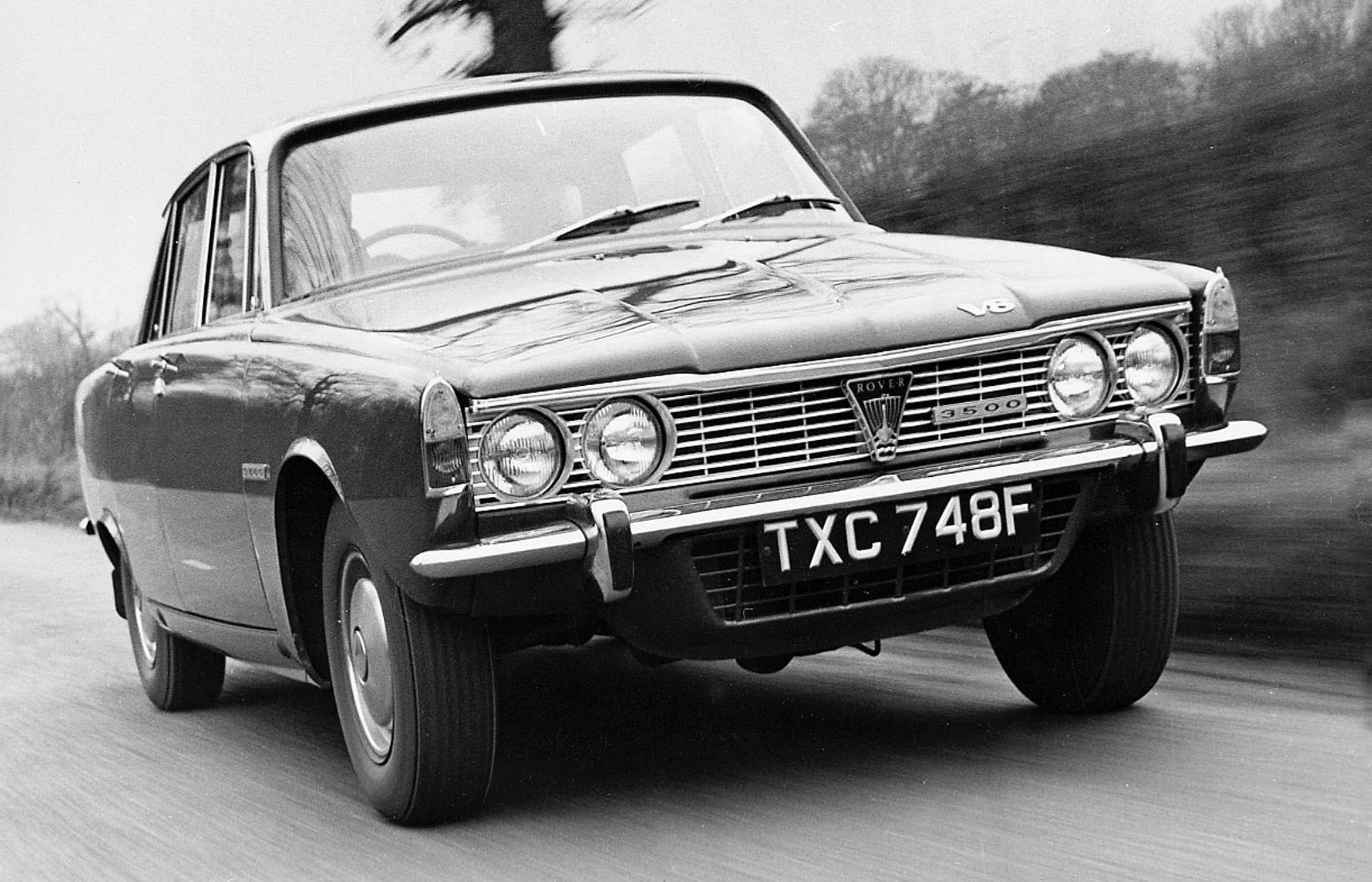 Sometimes we struggle to get our hands on decent press shots of whatever car we might be featuring. Weirdly though, in the case of this, the Rover P6, we found loads. It’s a car from the 1960s, yet our usual image source was awash with imagery. How nice.

There is one small issue though. They’re all in black and white. So, in order to get the most out of this review, cast your mind back to a simpler time. A time when men wore a shirt and tie no matter the occasion. When women were called Doreen and when having one TV illustrated wealth equal to that of a modern day Premiership footballer.

The Rover P6 came into the world in 1963 and, well, it blew people’s minds. The car was a revolution in terms of design, engine and the way it drove. You have to remember that the car the P6 was to replace, namely the Rover P4 (not the P5, despite what your dad might tell you. The P6 was built alongside the P5) was old. Very old. 1949 old to be exact. The rear doors opened the wrong way, the engine was powered by coal, the wheels were made from straw… okay, it wasn’t that bad. But it was traditional and as such, far from revolutionary. The P6 changed all that.

Yes, we know that to say Rover was revolutionary is something of an oxymoron, but trust us when we say that back in the day, Rover was a revolutionary, forward-thinking company. Don’t believe us? The P6 was designed – and this is no word of a lie – to be propelled by jet turbine engine. A jet! In a Rover! Oh what could have been.

It didn’t get a jet turbine engine, obviously. It actually got a 2.0 petrol engine, though that in itself was quite interesting. At least for time it was, thanks to being an overhead cam design complete with combustion chambers built into the piston crowns. It was clever, and it was smooth. It was also pretty powerful with 104bhp on tap. Though if you wanted a bit more grunt, you could once 1966 rolled around thanks to the 2000TC version. It had, as the name suggests, twin SU carbs and generated a fruity (for the time) 124bhp or so.

The Series II P6 had bigger aspirations than just old Blighty, but going overseas meant it had to meet emissions regulations. As such, Rover had to fit it with a different exhaust and carb to alter the emissions. But rather than strangle the 2000 engine, Rover upped the capacity by 10% to make up for the loss of power, creating the 2200. Clever.

The 2200 engines replaced the 2000 during the Series II’s run, so that makes it easy to differentiate between Series I and Series II. Tell people that at steam rallies/car shows and they will love you. Try it. Though you can get a Series II 2000, so don’t make yourself look like a wally.

Anyway, who gives a damn about the four-cylinder engines? You’re here for the V8, aren’t you? We can’t say that we blame you, as it was an idle search for V8 P6s that spawned this review.

Now you might know the 3.5 V8 that called the P6 home was in fact the aluminium Buick V8 engine for which Rover bought the rights. It’s a famous engine, after all. Available with a manual (in 3500S trim) or auto (3500) the lightweight V8 could shove the P6 up to the giddy heights of 114mph, which was remarkable for the 1960s. What’s even more remarkable is the fact Rover claimed the engine, thanks to its lightweight construction, weighed around the same as the four-cylinder engines. That’s impressive. It was a factory hot rod, and as such, it sold damn well.

Remember when we said the P6 was designed to house a jet turbine engine? Well, that’s a design idea that stayed with the car through its production. So sure was Rover that the P6 would join the jet age, it built the car with that engine application firmly in mind. That’s why the P6 has superb, if deeply confusing suspension.

At the rear it’s a de Dion system, though in the case of the P6, the ‘tube’ part of the suspension could telescope, unlike in a normal de Dion setup in which the tube would be fixed. This made for better road-holding without asking the half-shafts to move in and out with the motion of the suspension. Clever stuff, but child’s play compared to the wizardry at the front.

What you had there was a sort of cantilevered suspension, in which the spring ran parallel to the floor, working via a bellcrank (ask your dad) on the wheel hub, and connecting rods, with the fulcrum located where the strut top would be in a normal car. Think of it as a sort of pushrod suspension, but turned through 90 degrees to run down the car, rather than across it. It was very clever, and very smooth. If you’re wondering why the P6 had it all, it was because Rover wanted to stick that jet under the bonnet, so the space was needed. Still a bit confused? Allow these images to confuse you even further.

The clever stuff didn’t stop with suspension guaranteed to give Kwik Fit staff a migraine. The Rover P6 was a monocoque, or unibody construction, choose your poison. That meant it didn’t have a chassis, it was all built into the body. Much like pretty much every mass-produced car today. See? Rover… cutting edge.

It also had disc brakes all round, which was a big deal for the time, too. Hell, it’s a big deal today. It was just a remarkable car. Not to mention devastatingly handsome, but then with those chiselled looks and quad headlights, it was always going to be a looker.

Think of the Rover P6 as Britain’s answer to the remarkable Citroen DS. But a good, considered, well thought out and ultimately less French answer. It really was, and still is, a very special car. Quite why they’re so cheap is beyond us. Though having said that, there are many, many expensive ones. Still, have a gander on CarAndClassic and you’ll find plenty either under or hovering around our magical £2000 budget. And we’re not talking about ‘barn finds’ or absolute wrecks. You’re going to find MOTd, ready to drive P6s.

Buy one. This is one of those cars that truly deserves to be owned, experienced and most importantly of all, remembered. Rover wasn’t always a bimbling mess. Once upon a time it had its shit together, and it was utterly magnificent.