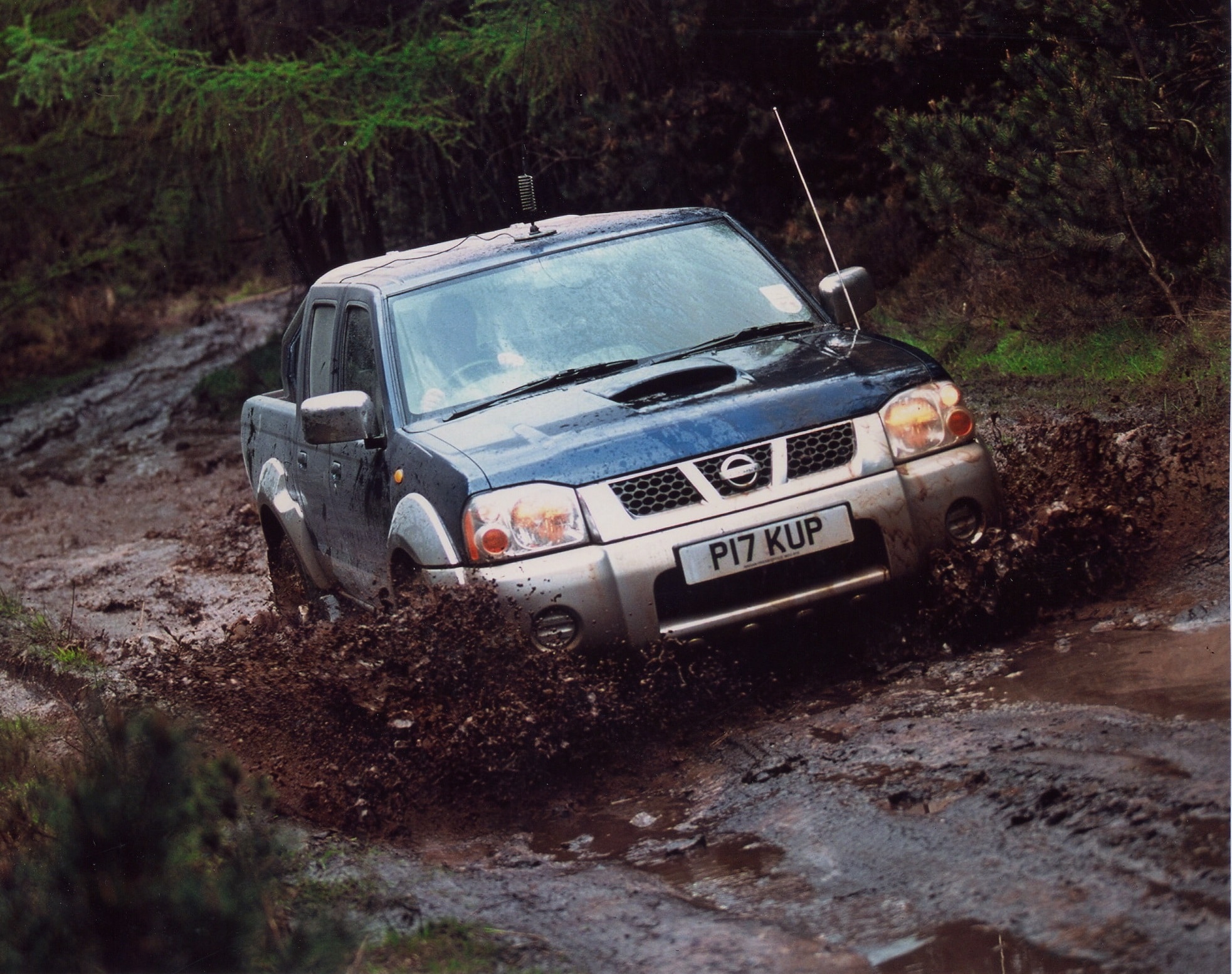 Are you the kind of person to whom the notion of a fixed abode doesn’t appeal? Does your mum favour periwinkle blue? Do you, dear reader, like ‘dags’? If you’re nodding along to all of that, you’ll be pleased to hear we have the vehicle for you. This is the D22 Nissan Navara, and it’s a bit of alright. Oh, and if you’re sitting in a house of bricks and mortar, not wheels and sheet aluminium, don’t worry, you can have one too.

Stereotypes that will get us beaten up aside, the D22 Navara is pretty damn good. Everybody likes to think Mitsubishi was the first to bring the ‘lifestyle’ pick-up to the UK market, and while it might have been the brand to popularise the notion, the fact remains that Nissan has been doing it for an age. It just didn’t never shouted about it. Or called its trucks silly names like ‘Warrior’ or ‘4 Life’.

Putting a lot of faith in that hand brake, there.

The predecessor to the D22, the, um, D21, came out around the same time the wheel was invented. It was a rugged, tough, go anywhere kind of truck. But with it, it was very utilitarian, offering very little in the way of creature comforts. It had seats, a steering wheel, some pedals and a roof. That was about your lot. Still, it was hugely popular, even if it did live in the shadow of the mighty Hilux. But what pick-up doesn’t?

As the D21 matured, Nissan cottoned on that buyers were using them – especially in king cab guise – as actual cars, not just machines to carry bricks and lumber. Not to be confused with lumbar. A pick-up full of spines will attract the wrong kind of attention.

As such, Nissan decided that the D22 would be more comfortable and more usable as a general vehicle. It also decided to give the beast a name, as D22 wasn’t going to excite buyers. That name was Navara, and in 2001 tradesmen the length and breadth of the country rejoiced at the notion of a work truck with air-con, metallic paint, and alloy wheels. It was better than a trolley dash at ScrewFix Direct.

So, what’s it like? Well, it’s a pick-up that, despite its shiny bits, is designed for a life of hard graft. As such, it drives like a tractor. Actually, that’s not fair. Admittedly, it will be something of a culture shock if you’re going from a Fiesta to a D22, but as a truck, it’s not that bad. The rear can be a bit ‘lively’ if there’s no weight in it, and the body likes to flop about a bit, but it’s far from being unbearable.

The problem pick-ups have is that people think they ride like a Range Rover just because it’s a 4×4. That’s not how it works, we’re afraid. Pick-ups are designed to work, not to cosset your high-maintenance derriere. That said, you can live with a truck as long as you know what you’re getting. The ride isn’t unpleasant, it will happily chug along at motorway speeds and while – in the case of the D22 – the steering is a little light, it’s by no means vague. We’ve driven one and we liked it. The D22 feels mechanical and rugged. When you change gears or mash a pedal, you get the satisfaction of knowing that action making metal mesh into other bits of metal. You don’t get that with a Prius.

The Navara was a global vehicle, by which we mean Nissan sold it in pretty much every territory. As such, it was offered with around 13,048 different engines. Don’t fret though, as here on British soil we only got the one. Namely the 2.5Di with 133bhp and a relatively impressive 224lb/ft of torque, so it’s good at lugging the weight you throw in its bed. It also makes the Navara a good mule for towing things, like, say, caravans. Not that we’re casting aspersions here.

That trusty diesel lump shunts the Navara’s mass along nicely, too. 13.8 seconds to 60 isn’t half bad for something made of girders and oil. Not that it’s a racer. Man, that would be the worst Fast and Furious film ever. The Fast and the Furious: Smoky Old Drift.

Then of course you have the Navara’s big selling point. Namely the fact it can go off road. Unlike other vehicles in this sector, the Navara has longstanding off-road lineage. This sucker is happy as a clam when it’s up to its hubs in filth, just like its predecessors. And with selectable four wheel-drive, you’re not going to get stuck. Throw on some decent off-road rubber and you’ll have a proper mud-hunting weapon. Again, you can’t do that in a Prius.

In terms of buying one, don’t expect a minter. Especially at this price point. You’re dealing with a truck that has to work to earn its keep, so the odd bump and scrape is to be expected. That said, it gives it character, so it’s not a bad thing.

Load-bed floors can be a mess if the truck wasn’t treated to a hard plastic bed-liner when it left the dealership. If that’s the case, then rust can also be a big concern where the paint has been exposed.

The same can be said for the chassis, so have a good poke around under there. Be more freaked out if there’s rust rather than evidence of repairs. A plate welded on later in life is better than oxidised metal. That said, the D22 is a tough old Hector, unlike its successor, the D40, which developed an unfortunate reputation for, well, snapping in half.

All in all though, the D22 is a good truck, and in all probability it’s the best one you can buy within budget, other than the L200 of course. If you want a rugged vehicle that can still do the daily duties of a car, you can’t go far wrong. Plus, it’s brilliant for Sunday tip runs. Not that the council will let you in, given they’ll think you’re a pik…