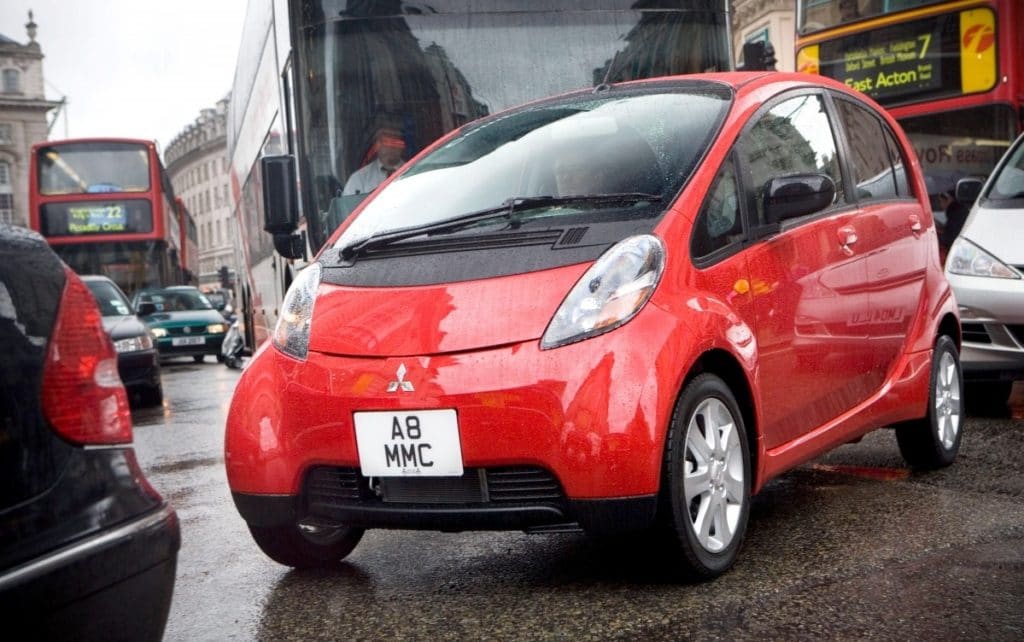 Cars, much like our waistline, are getting bigger. Look at a 2020 MINI and you’ll need to stand back to fit it in your field of view. Seen the new Corsa? It has its own post code. Small cars aren’t small anymore. And this isn’t a new trend. Cars have been getting fatter for a while now, which in a sense is a sign of progress, as one of the main motivators is the need to make them as safe as possible. However, it does mean that the notion of a ‘small’ car has become blurred over the last couple of decades. There are, however, exceptions. Like this, the Mitsubishi i.

Yes, we know, i is a stupid name for a car, and it’s one that is sending our squiggly blue Microsoft Word line into a tailspin. “don’t you mean ‘I’?’. No, we don’t. Third vowel, lower case. That’s its name. And in today’s automotive landscape, it’s a name (or letter) that you might associate with cars of an electric persuasion. And yes, there is batter-filled i, but that’s not what we’re looking at here. No, what has our attention is the TURBOCHARGED, INTERCOOLED, REAR-WHEEL DRIVE, um, 659cc three-cylinder petrol. It’s like a drift car for mice.

Yeah, you read that right. Mainly because we wrote it in block capitals. But anyway. The i is a mad little bastard. Small cars have, since the Mini of ’59, generally had the engine in the front and consequently, they’ve been front-wheel drive. Putting the engine out front means there is nothing mechanical in the way of the passenger compartment, and thus more space for people. Logic. But the i cared not for logic, so instead, the engine and gearbox are in the back. But because they’re so laughably small, there is little impact on interior space. This further aided by Mitsubishi’s decision to make the i tall and thin. The passengers don’t sit behind the running gear, they sit on top of it.

You might think that by putting the engine in the back, the little i is a bit of a handful. Well, um, it’s really not. It’s hard to be a handful with less than 70bhp. Yeah, it’s turbocharged and intercooled, but it’s still a three-cylinder, 659cc unit. Though it’s very clever, with twin cams, 12 valves and clever management. And it’s mated to a ‘no fuss’ automatic’ transmission, making it child’s play to drive. But don’t let children drive it.

In reality, the handling is well balanced, the ‘wheel at each corner’ design makes it feel like you’re driving a keen roller skate, like the Mini of old, in fact. The turning circle is tiny, so you’ll be able to wedge the i into even the most tricky of spaces, and it can seat four.

It might look like a prop from Blade Runner 2049, but it’s far more than that. The fact it can fit four people is the big selling point of this tiny, 900kg car. other city cars, like the Smart ForTwo for example, can only seat two. Clue is in the name. The i will happily swallow four, and four adults at that. None of them will thank you for it if they have to be in your i for more than hour, as the seats aren’t the most supportive. But for getting you and three mates into the city like people do on adverts for coffee or lifestyle clothing, the i is perfect.

It is not, however, perfect on anything other than A road. It’s a bit of a given, given its size, but we still think it’s worth talking about. The slab-sidedness of the i means it gets buffeted around by crosswinds like a windsock. The little engine is well out of puff at motorway speeds. The narrow track means you’re going to be tram-lining like a fool, while the general small stature of the i will see to it you fill your underwear with poo every time one Eddie’s artics thunder past you. Keep it off the fast roads though, and you’re laughing.

Being a Mitsubishi, the build and specification is good. Electric things are in abundance with climate control, six-speaker CD stereo, powered windows and mirrors and ABS with electronic brakeforce distribution all standard. As is a gaggle of airbags to keep you safe should you decide to brave the M6. In fact, EuroNCAP gave it four out of five stars, which is okay. Not brilliant, but better than a Ford Cortina.

Had it not been so very expensive when it was new (the best part of ten grand in 2007) the i would more than likely be a more common sight on our roads. Sadly though, we just weren’t willing to take the plunge on a car so far from convention. It did sell well, but figures weren’t exceptional, at least not for the petrol version.

We like the i. Not only is it a weird and wonderful little thing, it’s also incredibly reliable, it’s a riot to drive and for a small car, it’s remarkably practical. This is the kind of car you buy as a second runabout, or as something for a new driver. In fact, as a first car, this is absolutely perfect.

The petrol i might not have been the big success Mitsubishi had hoped (though it was by no means a failure), and that’s okay. The i’s legacy is greater than a three-cylinder petrol engine. This car went on to become the fully-electric Mitsubishi i-MiEV, a ca that while rare of a here, was a massive success in its home Japan. And this was back in 2009, before the EV train had really got going. Impressive for such a tiny, slightly weird, little car.