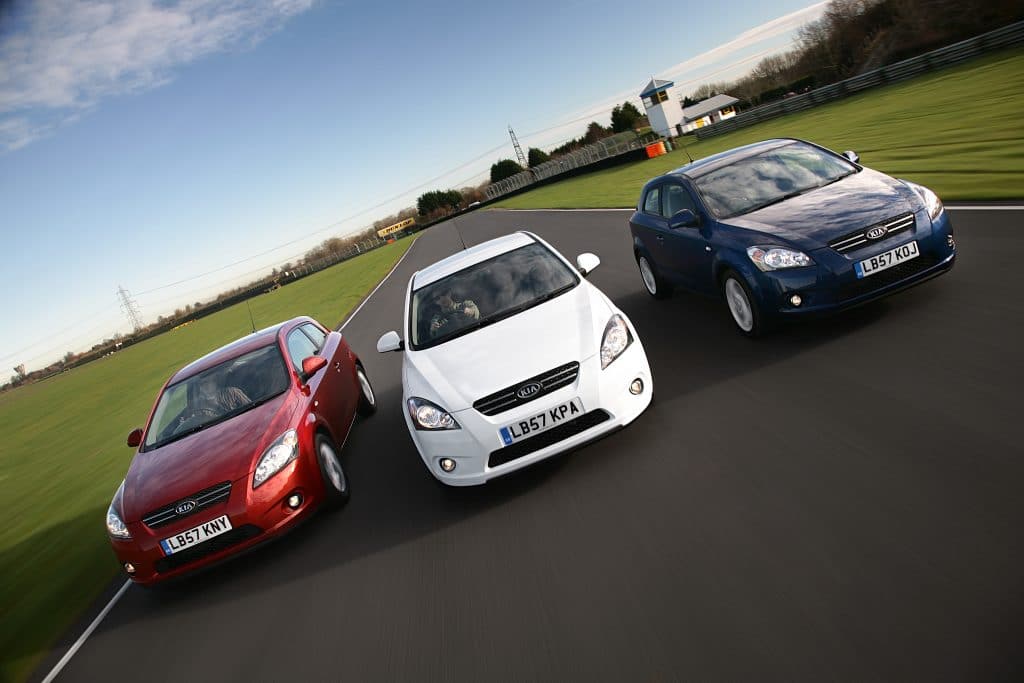 Kia pro_cee’d is a silly name (we checked, it should be lower case). Happily though, the car isn’t silly. It’s good.

Back in the day it was easy to scoff when someone mentioned the name Kia. Other than the silly little Pride, Kia wasn’t really up to much. It was just one of those strange little car companies that wasn’t quite Japanese enough for us to take notice. More fool us. Because while we were keen to either mock or ignore its efforts, Kia was busy building an empire. Kia is a big, BIG car maker. And in the 2000s it showed us, and oh how we stopped laughing.

In fact, we found ourselves ignoring Nissan, Toyota and others in favour of this once ‘funny’ car maker. Why? Because it turned out that if we let ourselves get close to a Kia, we’d see they were good. We’d also see they were cheap, economical and for the most part, sold with a seven, that’s SEVEN year warranty. Unheard of. But because we’re British, and as such love to try and take things back to the shop when they’ve broken, even though we bought them in 1983, we bought all the Kias we could. Now it’s a household name on British soil. And the wonderful pro_cee’d is perfect example of why.

The pro_cee’d was Kia’s first stab at putting some real style into a car, and it worked. There was a five-door version, which was very much a basic hatchback. This though, the pro_cee’d, was a three-door, and it had sporty aspirations.

In reality, it was never going to stack up against the hot hatch mainstays, but that didn’t matter. The pro_cee’d was a fine example of what could be done. And if you look at Kia’s current range, with cars like the deeply impressive Optima and the outright bonkers but brilliant Stinger (that’s how you name a car) you can see that the pro_cee’d was genesis to that movement. This, despite not being a very old car at all, was the point where things got big for Kia.

While the name might suggest a propensity toward headbutting the horizon, the reality is a bit far from that. The pro_cee’d range started with a 1.4 petrol with a mere 104bhp. Needless to say, you had to screw the knackers off it if you wanted to get anywhere. There was a 1.6 petrol with a 124bhp, but again, that required some work. They could both deal with a thrashing though. Not only were they both subject to that magical seven year warranty, they were also both chain-driven, so no cambelt to worry about. Nice.

The diesels were were the pro_cee’d shone. The 1.6 CRDi could be had with 89bhp or 113bhp, neither of which sounds like a lot. But don’t fret, because we’re talking diesel here, so both had a nice dollop of torque to help you, um, proceed.

The one to go for though is the 2.0 CRDi with 138bhp. This was the only one with six cogs (the rest had five) but it was also the fastest, and the most enjoyable. Plus, being a diesel, it was good on the old go juice, which is good for the wallet considering you have to sell a child in order to fill up these days.

On the road, the pro_cee’d was pretty much the same as the five-door, and if there was any area that would let it down, it was this. That’s not to say it’s bad to drive. Far from it in fact. It’s more case of the sleek, sporty, three-door body perhaps writing cheques that the chassis can’t cash.

The beat way to describe the pro_cee’d’s (that’s confusing, should that apostrophe be there?) drive is average at best. The steering has a decent bit of weight to it, and it happily goes where you point it. The chassis is comfortable and capable, but not exactly what you’d call exciting. Then there’s the gearchange which, in a so say sporty car, you’d expect to be sharp and crisp. In reality, it’s quite… vague.

Go into the pro_cee’d world with your eyes open though, and you’ll be fine. If you’re after a hard-edged sportster, there are better options. Think of the pro_cee’d as your box-fresh trainers. They look good, but you’re never going to go fast in them.

Inside it’s a similar story to the chassis, in that it doesn’t match the far more exciting exterior. It’s fine though. The Koreans know how to make a hear-wearing interior and the pro_cee’d is no exception to that. It does the job, but without dazzling you. But in an age of LCD this and digital dash, there is something to be said for a driver’s vista that puts function firmly over form.

In terms of safety, the pro_cee’d gladly robbed its five-door sibling of all the good stuff like six airbags, Isofix child seat mountings, a strong passenger cell, clever steering and braking electronics and more. As such, Kia conndensers, EuroNCAP, gave it the full five stars. So should you drive into a wall, you’ll probably be okay. Don’t though. It’ll still hurt. Five stars or not.

The biggest selling point, however, for the pro_cee’d is the warranty and reliability. For your £2,000 you’re going to be looking at a 2008/09 model. That means you’re buying  car, in the case of a Kia, that only fell out of warranty two or three years ago. When buying on a budget, reliability is a key concerned, and the pro_cee’d has it covered with aplomb.

Okay, so it might not be as sporty as the name suggests, but it is handsome, it is safe and it is brilliantly reliable. And it’s less than ten years old. All for less than £2,000. You really can’t argue with that.