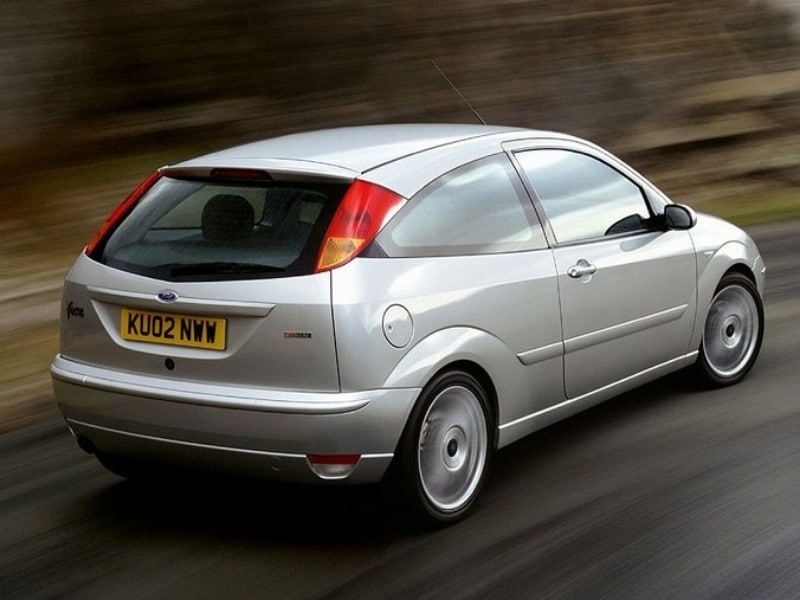 Unlike the ST170, the Focus RS is an annoying car. Not in terms of its handling, engine or aesthetic – they’re all fantastic. No, it’s an annoying bastard because it dances around the room shouting “look at me, look at me” like that annoying child on You’ve Been Framed videos who inevitably gets hit in the chops by an angry younger sibling. It wants to be the centre of attention because it sports the RS badge, and in its eyes that’s the best there is.

Well, actually, you flare-arched, one-colour-only show off, there’s an option for people who don’t want to spend £10,000 on a 10yr-old Ford. It’s an option that carries no RS badge, its engine sports no turbo and its gearbox contains no Quaife differential. It does, however, offer just as much driver satisfaction, almost as much exclusivity and plenty of fun, all for less than £2000. It goes by the name of the Focus ST170 and it’s the sibling that wants to punch the RS in its expensive face. And rightly so – the ST170 is a corker.

You could get five of these for the cost of one RS. Then you could commit a gang war RS hate crime, or something…

The Focus set the motoring press alight when it was released back in the late ’90s, even with a humble and fuel-hungry 1.6 (or 1.4 in some cases – shudder) powering the front wheels. It wasn’t the engine that caused the media raucous though, it was the chassis. Even if you bought a poverty-spec 1.4 with manual windows and a coal heater, you still got fully independent suspension and (at the time) cutting edge looks on a family hatch – that was a big deal.

There’s all kinds of suspension trickery going on under here, which is why it’s not wrapped around a tree

That suspension resulted in a car that gripped the road tighter than X-Factor contestants grip stupidity. Like we said earlier; that makes even the hum-drum Focus varients fun to drive. Shove a 2.0 170bhp engine under the bonnet though – complete with 145lb/ft of torque and a six-speed gearbox – and you’ve got a car that’s a huge amount of fun on the twisty stuff. Plus, it only weighs 1200kg in three-door guise, which is pretty light for a modern car full of airbags, computers and other electronic faff.

Inside there’s cloth, leather, air-con and even a CD player – it’s all very swish. Plus, as it’s a Focus, there’s more than enough space for you, your kids and all their associated fodder – this really is a practical, sporty car for all the family.

So, it’s got funky seats, nice alloys, it looks a bit sporty and you can put your kids in the back. WHO CARES? The ST boasts practicality as a bonus, not as a sales factoid. The Focus ST170 doesn’t care about your kids or any of your passengers for that matter. All it cares about it rewarding you, the driver, and oh, how it rewards you!

The combination of that engine and suspension results in one of Ford’s finest driver’s cars of the era. Every journey in an ST170 is a joy, no matter how mundane the reason for that journey may be. Stick one of these on a glorious, rising, falling and swooping Welsh A-road and you’ll be smiling from ear to ear – we guarantee it. In terms of the cars we’ve splashed over N2G, the ST170 is easily one of the most exciting, and crucially one of the most rewarding to drive. That in itself makes the £2000 well worth spending.

This isn’t our Focus ST170, honest

We love the ST170 and we’re confident you would too, if you bought one. And you should, there’s no reason not to. Oh, and if you’re going to complain about a hatch being too short on space we’d like you to shush your pretty mouth right this instant. Y’see, they made an estate, too…

…so no matter what your circumstances, the ST170 can accommodate.

Also, £2000 will get you a really, really good one. Ours was half that, so just imagine what kind of immaculate example you’d get for the full £2k. Or, just buy a cheap one and spend the other £1000 on balloons, or gnomes, or whatever floats your boat.