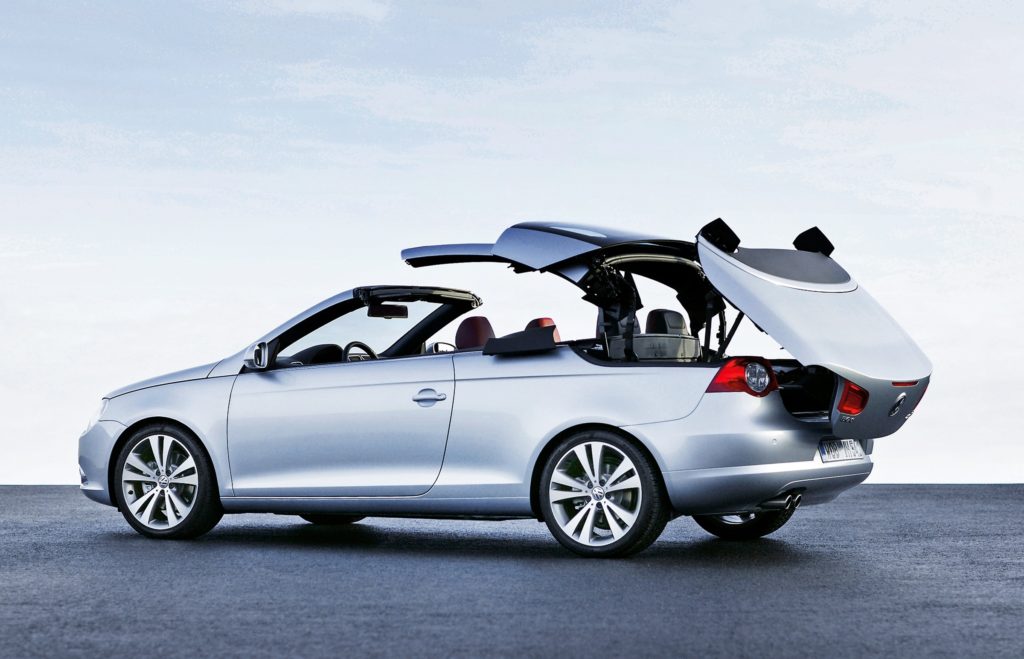 Before we get into this, let’s address the big, slightly damp elephant in the room. Coupe-convertibles leak. There, we said it. Every time we post about a car with a hard folding roof, our social channels light up with comments about leaking roofs. LIKE WE DON’T KNOW. This is Not £2 Grand, you’re not buying a new car. There are going to be imperfections, and when you throw in a complicated roof system, those complications are going to result in you getting wet. Deal with it. Wear a hat.

Or, and here’s a novel idea, go into it knowing that you might need to do a bit of fettling. It’s not the end of the world to do so. It’ll give you an enormous sense of accomplishment and you’ll have the last laugh, because you’ll be driving a car that keep the water on the outside.

You see, here’s the dirty little secret – coupe-convertibles leak not because of poor design (we’re ignoring the atrocious Vauxhall Astra CC), but because people don’t look after them. Think of a coupe-convertible as a nice suit. You can’t just throw it in the washing machine with your socks. It needs a bit of extra care, that’s all.

Right then, rant over, let’s have a look at this, the Volkswagen Eos. Not the Golf Eos, mind. Just Eos. She was the Greek goddess of the dawn, don’t you know? As such, if you drive an Eos in the AM with the roof up, she will smite you. SMITE YOU WITH FURIOUS RAGE. Possibly. We’re not that well up on Greek mythology. She might be busy, anyway.

Moving on. The Eos was introduced in 2006 and was pitted against the ‘on trend’ offerings from Renault, Ford and Vauxhall. Being Volkswagen, they did things a little differently. This wasn’t a quick cash-in on the trend, it was a considered and beautifully engineered bit of kit.

Let’s start with the roof. It’s made up of five sections which, via a bespoke hydraulic system, fold into the boot. The whole shebang takes 25 seconds, which isn’t exactly fast. But hey, it’s a complicated system, better to fold it away properly rather than rush it.

The roof is different from those of its peers in some significant ways. First of all, the whole thing was designed by OASys, a subsidiary of Webasto. And considering Webasto is so old it actually put a sunroof in The Ark, it knows a thing or two about these matters. The roof is metal, not plastic. And finally, it has a sunroof. Yeah, Volkswagen went full Xzibit and put a sunroof in yo’ convertible roof. Different. Beneficial, too. The sunroof actually makes the cabin of the Eos as light, airy place to be when the lid is up.

Before we move on from the roof, we should talk about leaks. Yes, the Eos has been subject to many complaints about water getting in. But here’s the thing, those complaints generally come from people who don’t look after them. If you have one of these cars, you need to maintain the rubber seals. You can do that by investing in some rubber lubricant (insert Ann Summers gag here). This will keep things supple, and as such, watertight. Also, don’t let dirt build up, keep the damn thing clean. Finally, if you opt for an early (2006ish) Eos, consider upgrading the rubber seals to those of a later model – they were widely regarded as being much better.

Right, roof done, let’s move onto what is arguably the Eos’ party piece – the engines. Well, specifically one engine. There’s a 2.0 diesel, which is good if you don’t mind Daily Mail readers vomiting on you. There’s also a 1.6 115bhp petrol or a 2.0FSi petrol which, with 150bhp, is good. But that’s not what we’re excited about. No, we’re all giddy for the 2.0TFSi lump with 200bhp. Or, in other words, the same engine you’ll find in the brilliant MkV Golf GTi. Handy.

The roof does bring some issues to the engine party when you stack the Eos directly against the Golf. The added weight means it’s not as fast, but surprisingly, the Eos is surprisingly rigid. As such, it doesn’t flex and wobble through the bends. It feels tight and direct, which is nice. And if you are concerned about the performance, we’re saying it’s not as fast as a GTI. Which is like saying a Jalapeno isn’t as spicy as a Habanero.

Later cars had the option of a DSG transmission, but you can’t afford one of those, so you’ll have to make do with the very slick and very good six-speed manual transmission. Tough life, eh?

Inside, the Eos keeps you smiling. It’s a really rather pleasant place to be in the sense that it’s spacious, comfortable and wonderfully robust and easy to use. But then, what would you expect from a Volkswagen? The only downside is that – despite the nice plastics and the odd bit of chrome – it’s not exactly an exciting cabin. It’s very grey and functional. There’s no flair. Shame.

It is, as we say, comfortable though. You can get two adults in the back without having to go all ‘medieval doctor’ on their legs. The addition of the sunroof keeps it light and airy, and thanks to a larger than average for this class rear window, visibility is good. You’re really not making any compromises with the Eos, unless of course the roof is down. It has to go somewhere when it’s folded up, and that somewhere is the boot. As such, your luggage space is drastically reduced if you want the find in your face.

Finally, there’s the issue of safety. Convertibles normally suffer on this front, so it comes as reassuring news to hear that the Eos is actually quite tough. You get Isofix mounting points, pop-up roll-over protection, ABS, a veritable bouncy castle’s worth of airbags and traction control. EuroNCAP threw one at a wall and give it four out of five stars, so you can drive one safe in the knowledge you’ll be okay if you hit a tree.

So there you go, the Volkswagen not a Golf Eos. It’s decent, well-built, safe and if you get the right engine, fast car. Perfect then, and as ever, all for less than two thousand of your pounds. Noice.