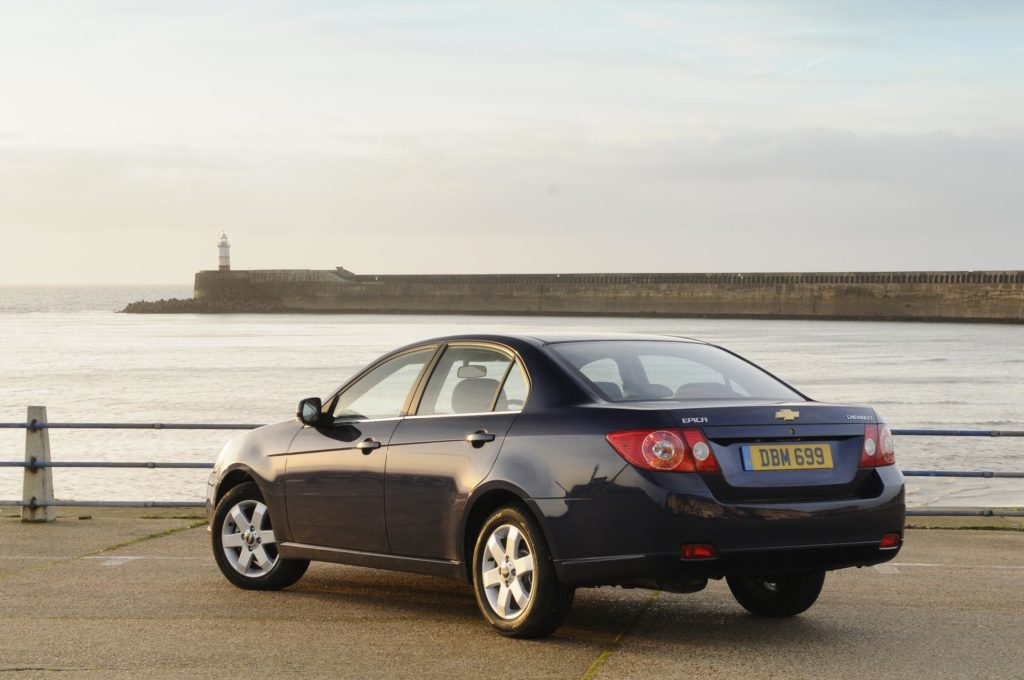 The Chevrolet Epica is not, as the name would suggest, epic. Instead, it’s one of those cars that was named by pulling ideas out of the irony hat. Other cars to fall into this category would be the Mitsubishi Carisma and the Isuzu Mysterious Utility Wizard (Google it, it’s real). Okay, that second one isn’t really ironic as much as it’s just plain daft. But whatever. We wanted to include it.

The Chevrolet Epica. Yes. Hmmm. The Epica. It’s not, as we’ve cleared up, epic. In fact, no UK-sold Cheverolet ever has been. The Chevrolet name conjures up mental imagery of V8s, Corvettes and ’57 Bel Airs. The reality is a load of Daewoo cast-offs. We get the marketing angle at play here. By calling them Chevrolets you get people interested. However, the reality is that the cars on offer are some distance from the ‘red white and blue’ imagery. Nobody is going to mistake the Epica for a Corvette, put it that way. They might mistake it for… nothing. Because they will have forgotten about it before finding something comparable.

But does that automatically mean these Chevrolets are terrible cars? No, of course not. Ignore the misleading badges and what you’re presented with is a range of cars that are reliable, inoffensive to look at and largely practical. The Epica, silly though its name may be, is not a bad car. It’s not a great one, either. But that’s fine. Sometimes we just need a car to be a car, in the dictionary sense of the word. The Epica does that. And because the Epica was only bought be people called Geoffrey, your used Epica will have been looked after, unlike a Mondeo of similar vintage.

The Chevrolet Epica was a true ‘blink and you miss it’ machine, as it was only available from December ’08 through to August ’09. It had a longer life elsewhere in the world, where is was known as the Daewoo Tosca, which is a silly name for a car. Our Nan’s shih-tzu was called Tosca. True story.

With Mondeo and Insignia-esque dimensions, the Epica’s market position dreams were obvious. However, we had the Mondeo and, um, the Insignia. And while the latter is about as exciting as mild cheddar, it was at least enjoyable to drive. And Vauxhall, bless’em, actually screwed it together pretty well. Not that the build quality of the Epica is bad, because it’s not. However, it was deeply basic and lacked any sense of design or style. It was designed by a computer, not a human. As such, the Mondeo and the Insignia feel like silk-dipped Bentleys by comparison. The Epica was most definitely built to a price. And that is why it lost out to other cars in the same segment.

That said, the Epica was well-appointed. Some had leather, while almost all of them had air-con, electric everything, cruise control and a decent stereo. The cabin was large, light and could happily swallow four actual adults. It had Isofix points as standard, too. If you had a go at wrapping it around a tree, front, passenger, side and curtain airbags would come to your aid.

As for engines, there were two. There was a four-pot diesel (the best option, to be honest) and a straight-six 2.0 petrol. Now, you driftybois might be getting excited at the notion of a cheap car with an inline-six. Before you buy that drift wand off eBay, we should probably tell you that the Epica is front-wheel drive. Yes, it has a FWD straight six. The cylinders are, presumably, about as big as test tubes. It’s a weird setup, and with 140bhp it’s not even fast. In fact, it’s a noisy, unrefined lump that you should avoid. Just buy the diesel. It’s better.

You only get five manual gears in the Epica, and on those five the throw is comical. You’ll need rear seat passengers to grab 2nd and 4th for you. There is a six-speed auto for the 2.0 diesel, and all things considered, it’s not a bad ‘box. It’s well matched to the tiny power-band, so exploits the engine’s output well.

No matter the engine, no matter the transmission, you’re going to be underwhelmed. but that’s not a bad thin. Not every car can be or should be an all-out assault on the senses. Some just need to work, and the Epica does. Historical reports show there were no major failings that you need to be aware of. Make sure you get full service history and you should be set.

When it comes to the aesthetic of the Epica, we can indeed confirm it has one. That… that’s about it. It’s not an ugly car, not by any stretch. Available only as a three-box saloon, the proportions are well balanced and nothing seems out of place or proportion. But that’s about your lot. There is nothing to grab the eyes. It may well not be ugly, but nor is it a looker. If this car was a drink, it would be tea with no sugar. If it was food, it would be a cheese sandwich. If it was a person, it would be called Colin. If it were an item of clothing, it would be jeans.

It’s an inoffensive machine. A car that is largely forgettable, which would make it ideal for ram-raiding, as nobody would be able to identify it. Though don’t take up ram-raiding. The Police don’t like that. Nor would your mum.

On the road, the Epica is… lacking. The steering is wooly to say the least, the handling is not without a great deal of body-roll, there’s no sense of speed or urgency and the overall handling is numb at best. However, and this is what’s important, it’s not a bad drive. It’s quiet and it’s comfortable. And those aren’t bad qualities to have. The Epica is never going to thrill in the same way as a 3 Series, but for the money, the Epica will be in better condition, it’ll have fewer miles and it will have a better service history. That’s why you’re buying an Epica; because while dull it is a lesson in value for money.

A 2009 LT with all the toys will set you back about £1,500. And that is a lot of car for the money. If you want something reliable, spacious, comfortable and inoffensive, this is it. It is a car, and it is good at being just that. It might not excel, it won’t have jealous neighbours twitching at their curtains and the lads down the pub won’t be clammering over it. However, it’ll start every morning, it’ll get you where you need to be and it’ll do so without fuss or drama. And sometimes, that’s all we want.