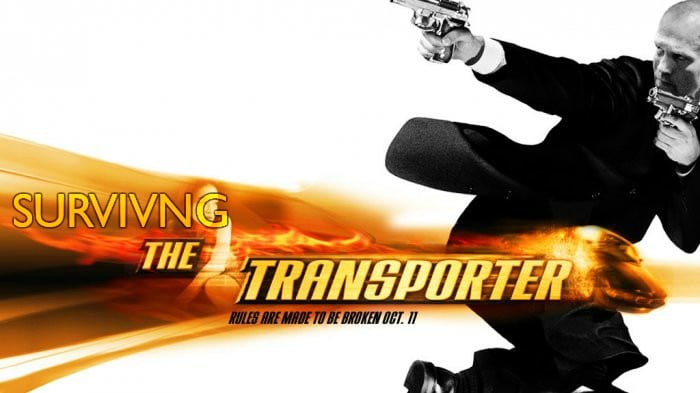 Regular readers may remember that a few months back, we sifted through the terrible Irish accents and weak plot of Ronin in a bid to find out which car would have been best to survive the whole Parisian ordeal. You seemed to like it, so we thought we’d have another go.

This time we look at 2002’s Lock, Stock and Two Smoking Barrels spin-off, The Transporter, in which Bacon (now under the fake name of Frank Martin) finds himself in France working as a high-end UPS driver. Many, many cars died in the making of this film, so we have to ask, would any of them be suitable for surviving The Transporter. Let’s have a look.

The the E38 750i is the hero of the opening scene. Loitering in a multi-storey car park, it looks both handsome and menacing, but that could be said of any E38, not just one presented to us via a bargain-bin DVD. The E38 is a superb car, a timeless design that looks as good today as it did back in the ’90s when it was launched.

We have to wonder, then, if Frank ‘Bacon’ Martin is any good at his job, given that it’s 2002 in his world and the car is an early pre-facelft – could he not afford something newer? It all becomes clear pretty quickly though, as this is no ordinary E38.

This 750i has been fitted with a manual transmission, a bespoke digital start system (the PIN is 1732 by the way), James Bond-esque rotating number plates, some truly hideous alloy wheels and apparently, Koni shocks that were inexplicably needed for the first job. And while it can indeed seat five people in comfort, Bacon has a zero tolerance policy when it comes to any more than four. Unless pre-booked via UPS, presumably. If you’re the fifth, you’re going to get shot in the head. Soz.

The 750i goes on to power-slide around the streets of Nice, weaving in and out of traffic, jumping through the air and causing much carnage in its wake. It looks heroic, and it’s the hero’s car, so this must be the one that can survive the film, right?

Wrong. Not long after, it gets blown up by a disgruntled customer of Frank’s, killing any chance of either it or the unconscious policeman in its boot, surviving the movie. Shame. We do like an E38.

Nope. Not a chance. Frank drops the poor Honda Shuttle off the back of the car transporter he’s just landed his E38 on (don’t ask). In doing so, he forces it to become an impromptu wall for the police cars in pursuit. It gets obliterated. Leading us to…

Also gets unceremoniously dumped off the back of the car transporter. Also gets obliterated, but this time by the police cars and by the Honda Shuttle above. Poor Honda.

The many Peugeot 307s

Being a Peugeot and being cast in a French-made film is the automotive equivalent of being judged guilty by a jury of your peers and being given the death sentence. Just watch Taxi, or District 13 for example and you’ll see all manner of Peugeots being destroyed. And The Transporter is no different. Yes, this fleet of 307s have a moment of glory as they slide about with their sirens blaring and lights flashing, but then they get slammed in cars like the Shuttle and Sierra above. No dice.

Could this be it? A plucky underdog story in the making perhaps? Bacon needs a car fast, but he can’t find a fast car, so he makes do with a humble Renault 5, or Le Car, to give it its proper name. We see shots of it heroically bouncing thorough the French countryside, rushing Bacon to his girl-saving destiny. This is it, this is the unlikely car that survive this film, we give you the… oh, it broke down. NEXT!

When Bacon’s BMW got blown up, he was pissed. And rightly so, a manual 750i is a wondrous thing. Full of rage, he drop kicks a man through a door, he shots some stuff, does the odd Judo chop, kicky kicky, punchy punchy, then the next thing we know a W140 S Class comes bursting out of a balsa-wood door. New car, then end, right?

Er, no. Bacon takes the S Class back to his fancy house and puts it in his garage. It’s now his BMW replacement, so presumably he can go back to shipping small oriental women in the trunk, complete with an office chair. Or at least that would have been the plan, had the baddies not blown his house up. Much like the E38, the W140 is quite literally toast. But hey, at least there wasn’t a knocked out policeman in the trunk this time.

What’s this then? A battered, somewhat forlorn Saab 900, driven by the charming Inspector Tarconi and later commandeered by Bacon? Yes, yes it is. And while it only features briefly, it does so with impressive pace and a faultless drive. Fra… Bacon needs to get to his little boat, and the Saab 900 is the only way to do it. It’s a wreck, but its Swedish heart still beats strong, it would seem. And it doesn’t crash, it doesn’t break down and most impressively for a car driven by Frank Martin, it doesn’t get blown up.

Yes, this is it, this is the car to use if you want to survive The Transporter.