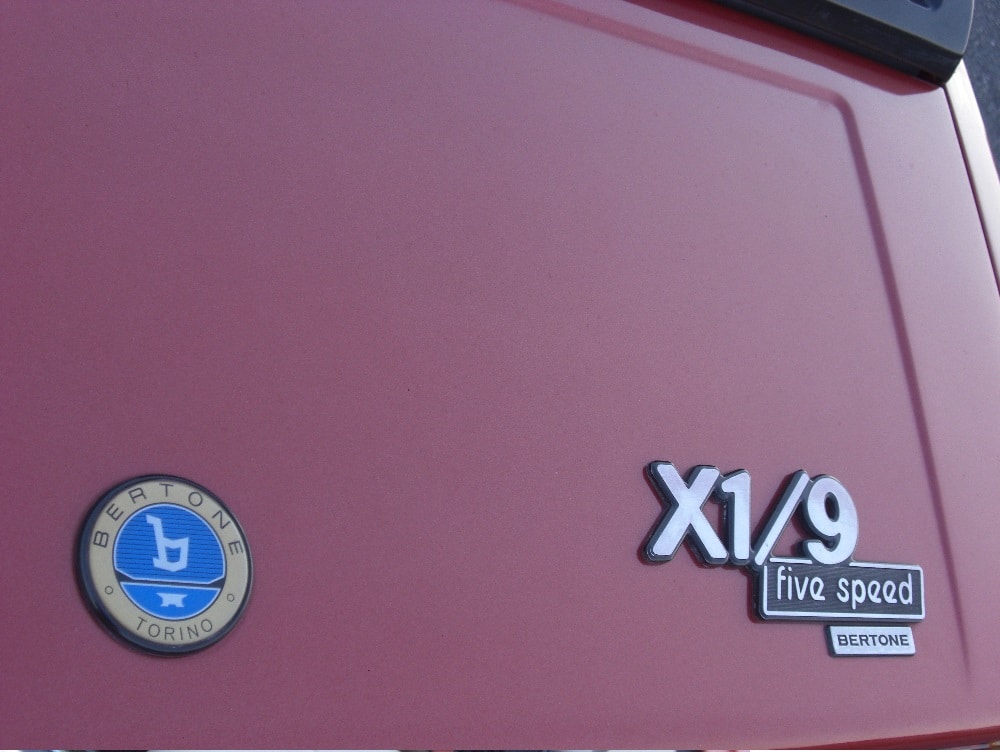 You may recognise the name Stuart Bird. There’s a good reason for that. You see, he has been on these pages with his Fiat Tempra. And now he’s back with his Fiat… x 1/9. Stuart, over to you…

Here is a classic tale of man loves machine. Iconic machine becomes a bit of a diva (despite being given a male name). True motoring passion is made. Lovely.

I’m not sure if that statement actually makes me out to sound like a pervert or if l too have a few screws loose like my Fiat. My little £1800 midlife crisis was purchased for many reasons. The first one being that while l am still able to bend over and tie up my shoe laces also means l can crouch down low enough to get into a proper sports car designed when sports cars were compromised. And small. And low.

The second one was that l had always wanted one ever since l was 5 years old and my sister returned from a school trip with a big blue Corgi toy X1/9 for me. Throughout my entire misspent youth of learning three tricks on my BMX and putting up various pictures of ladies and then men on my bedroom wall, the two Kodak pictures stuck together of a red X1/9 always stayed. This l would eventually imitate with my own car.

All of a sudden an advert for the dream car appeared on Pistonheads. A gold 1500 of 1979 vintage. At the age of just 38, the desire quickly escalated to the much needed “I want it NOW” level that only a car lover will understand. The seller assured me that it was all good, but there was a catch. Someone had already booked to see it.

And so to the 1980 1500 in red that was found on the internet. It was OK. Cheaper too by £700. What’s more, this had also been reupholstered with cream leather. The only catch was that the seller owned a bodyshop. It’s amazing what you can do with filler! Never before has caveat emptor applied to buying an Italian car. I’d bought an Alfasud from a bodyshop when l was 17 and it lasted three months.

To cut a long story short, it was doomed from the start. On the Saturday l was to view it, my Mk2 Golf blew a coolant hose in central London. Not all was lost, it was outside a Euro Car Parts and a VW specialist. Naturally neither establishment could help. The AA took over five hours to get to me, in which time l’d managed to bodge my car and limp it home. Should l then proceed with this X1/9 from the chap with the bodyshop?

I need not worry. The chap selling it had restored the body a decade ago, parked it in his grandmother’s garage and left it there except for MOT time. This meant that mechanically it would be shot to bits in a way that unused Fiats tend to be.

Mechanical problems on an Italian car not riddled with rust are far easier to fix than the other way around so l continued looking over the car and yes you guessed it, l bought it. Actually got £50 off because l thought the advert read £1800 and that’s all l had. Bargain.

Thwarted by a bloody fuel cap, l had returned to the seller with his comedy car in less than 10 minutes. Turned out none of the keys had ever fitted and it needed more than a flouncy wrist to crack it off. Oh did l look stupid!

This wasn’t to be the first mishap of the day with my little Bertone-badged Fiat. Everything had worked when l looked over the car. Only when we stopped at the Cobham services did Dave mention the tail lights flickering all over the place. “Watch the headlights” l replied. Up they went. Down they went. Then suddenly the nearside one would pop up and down again. A fault, a quirk and a big maker of smiles (Still makes me laugh today).

This little engined two-seater with removable top was quite fun. The giddy fun on ageing tyres came to an end not nine miles from home when after a quick whizz around a roundabout it all came to a chugging stop. Stupid bloody Fiat! What had l done? All was good again after a little rest and a persevering crank of the starter motor that we would soon discover to have a weak solenoid.

And so to the garage for a mechanical overhaul. First out were the tyres. They were full of tread. They just didn’t do anything great in putting down all this power to the road. 85 horses to be precise, so you can imagine how bad they were. The conking out turned out to be a dicky float in the carburettor that caused flooding if it cornered too hard to the right. There then followed a few more tweaks and the purchase of new bits and the X1/9, is that a TR7? nice TR7 mate, my brother had a X nineteen, pile of shit, or whatever people were calling it that week was set to roll. Curiously no-one ever calls it an MR2, and yet they look like closer siblings in lots of ways.

There is a sense of excitement with the little X1/9. In my case it’s called ignition key roulette. It will always start it’s just that the starter motor has different ideas on waking the Fiat Strada engine. Once it is started it chugs about until it’s warm and settled. More difficult than you think with 12 litres of coolant to warm up. Then when it is warm and you are stuck in traffic it has a tendency to conk out from fuel evaporation, never to start again for at least 20 minuets. Little trick it to get the engine lid open while in traffic. Unfortunately the Italians decided to leave the opening handles in the passengers door shut.

By today’s standards it’s pretty lame. The 165 section tyres are no match to a Fiesta on 195 sections. Even a Dacia Duster could go around a corner just as fast. What that Duster won’t do though is SPIN OUT when you least expect it, resulting in cracking an alloy wheel. An alloy wheel you are soon to discover is magnesium and rather difficult to get someone to refurbish. It does now make for a great coffee table.

I’ve thought about selling the X1/9 for something else Italian like a Lancia Beta. I’ve had it for over 4 years now. It’s those bloody good looks that prevent me from selling it. They are still stunning if l do say so myself. Despite its diminutive size and me being over 6 foot, it is also rather comfy to drive. And it has pop-up headlights. I bloody LOVE pop-up headlights.