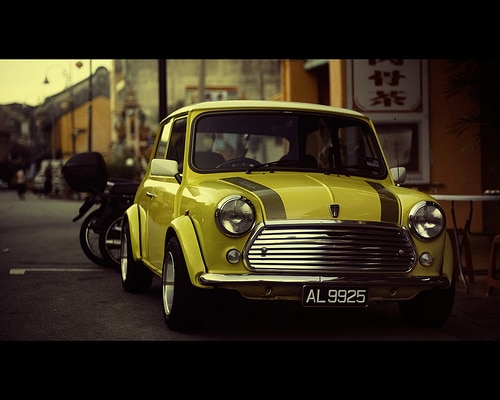 Right, where was I? Oh yeah, so the door fell off. By that I don’t mean it dropped, I don’t mean that a bracket snapped. No, it physically came away from the car. Big old facepalm right there.

Not wanting to ignore the beer I’d promised myself that night, I propped the door up and went inside, hoping that it was all a bad dream and my door hadn’t actually fallen off. Sadly that wasn’t the case. What made things worse was the discovery of an absent A-pillar thanks to a wee bit of rust. And when I say absent, I mean absent. There was nothing left to actually weld new hinges too, just a rusty gap. So, just as I’m sure any one of you would do, I had the door welded on. Welded on to such an extent it wouldn’t open again. I know, safe, right?

Again, not mine. Not by a long shot

A couple of days later, Paul and myself embarked on a massive road trip, covering 5 miles down to Miles Platting where my mate, Metro-killing Dean, had a unit. Five miles was a big deal in that little yellow turd, so we were thrilled to make it. In fact, to celebrate our success we each took it in turn to hoon the Mini around the yard, yanking on the handbrake like men possessed. Until, that was, the lever snapped off. That put an end to our skidding antics pretty quickly.

The drive back home was even more interesting. It was also the catalyst for anger on my part, not seen before or since. In reality, it probably wasn’t entirely the car’s fault – my naivety in expecting a Mini’s fuel gauge to work probably had a lot to do with it. But still, I was 18, so admitting my own shortcomings as the Mini coughed and spluttered to a halt in a not particularly desirable part of Manchester wasn’t on the cards.

After remembering neither Paul nor I had any money and after working out we were a good three miles from home, the rage set in. In a fit of anger I decided kicking the car was the most mature course of action until… *smash* …the window exploded in a shower of twinkling glass cubes. Paul watched on silently as I proceeded to kick the door into a banana shape.

Calming myself, we decided to phone Dean to secure a rescue of some kind. Dean didn’t answer. I got angry. I threw my phone at the steering wheel and it exploded into a rather large amount of teeny, tiny, iddy-bitty pieces. The night, as I’m sure you can tell, was not going well. And the night, as it happens, was not finished with us yet.

Enter stage left a perfect embodiment of the Manchester chav. Adorned from head to toe in sportswear which had never been used for anything sporty, other than running away from the local constabulary. His gang of ‘heavies’ weren’t too far behind him, all wearing the uniform of illiterate Manchester teens.

Politely declining, Paul and I made our excuses by suggesting that we’d rather not drive a presumably stolen car, and decided to make a break for it via the aid of gravity. It was about 2am now and we were becoming genuinely worried about our well-being. We’d remembered that Dean’s mum didn’t live too far away, so the plan was to roll down the A62 and hide out there until the morning.

As memory serves, the roll there involved Paul behind the wheel, while I stood on the one accessible sill and sort of ‘skated’ the car down the road. I’m sure it was a spectacular sight to behold. Crucially though, it worked and we got where we wanted to be.

“What do we do now?” enquired Paul.

“Dunno. Sleep in here I guess, then get Dean in the morning.” Paul’s face suggested this was not the answer he wanted. Sorry Paul.

While standing on the pavement we discussed other options in hushed tones. Walking was off the cards, as the car was now far from secure plus the walk meant going through some rough areas and we didn’t fancy ending up on the cover of the Manchester Evening News for all the wrong reasons. We were also far too polite to go knocking on Dean’s Mother’s door. So the only option was to…

We retreated to the ‘safety’ of the Mini. Me the back, Paul curled up on the passenger seat. I was gripping a Phillips screwdriver for dear life while Paul had a Stanley knife should the Zombie/Badger/Renault 21 salesman try and abduct us in the night.

Shivering under a shared beach towel, we attempted to get some sleep, with my final thoughts that night being focused solely on the fact that the Mini had to go.