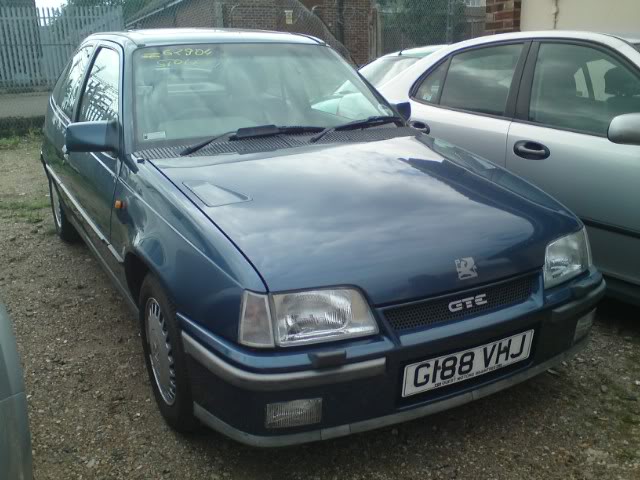 You may recall me mentioning in the Mini post that I had another Astra GTE sitting in my garage at about the same time I was driving around in that hateful yellow deathtrap. Again, this was a hand-me-down from my stepfather. He had become bored of it and as such, ownership fell to me.

Due to being 18 at this point, driving said GTE was a slightly more realistic proposition thanks in no small part to the fact I actually had a driving licence this time around, unlike when I owned the white one. The fact it would cost roughly £13,400 to insure said car was only a minor inconvenience in my naive young eyes.

Anyway, this is what it looked like. Though this is a picture shamelessly stolen from the internet, as yet again, I have no actual photos of it apart from one my mother took when she visited the Lake District. But that’s blurry and the car is a little blue spec on the horizon. Anyway, you don’t come here for pictures. You come here to bask in my misfortune, so on with the show.

It was a nice thing. Infinitely tidier than the white one and splashed in that very attractive shade of blue. It was a 2.0 8V, everything worked and quite frankly, I loved it. But what 18 year-old youth wouldn’t love such a machine?

The thing is, at the time, I had a great many cars. There was this, the dismembered yellow Mini, a green Mini, a Beetle (told you we were well into the overlapping stage, didn’t I?) and as I recall, there was also a Cavalier which I’d bought for £100 solely to sell on. Oh, and my Lupo company car.

With that homage to scrap filling up the drive, the GTE was relegated to the very full garage where it was promptly forgotten about. To my mind’s eye, it was something like this…

Anyway, many moons passed and a number of other cars slipped through my Arthur Daley-like fingers, all while the GTE remained sealed in its tomb of junk, plant pots and a tumble dryer that had last been used in 1993. The main thing is that it was locked away safe, or so I thought.

I say “thought” because during that time a chap – let’s call him Dave, because he was called Dave – entered my life. However, I would remain unaware of the full extent of his presence for quite some time. Nice one, Dave.

Dave was (and presumably still is) special, to put it lightly. He and I were never pals, nor did we ever really speak. He was simply a mate of a mate, and that’s how I wanted it to stay.

With an attachment to cigarettes of a ‘herbal’ persuasion, as well as the desire to happily live anywhere as long as it had a roof (my friend’s shed, for example), Dave took it upon himself to make the lives of those he knew utterly miserable by appearing and then stubbornly refusing to disappear from whence he came. A passing glance held for mere milliseconds was enough for Dave to invite himself into your life. Or in my case, car.

I can’t put a time on it because I literally didn’t go in the garage for months. All I know is that what I did see when I eventually breached the threshold was something akin to a crime scene in the movie, Se7en.

Seat fully-reclined, the interior was stuffed with duvets and towels from an unknown source. The footwells were thick with half eaten food and rigid socks, while the glass was heavy with the remnants of smoke, bodily odour and breathy condensation. IT WAS A TREAT!

As I was a teenager I decided the best course of action was to lock the garage door and ignore it. Which I did right until the house was sold and the car was sadly scrapped. C’est la vie.

So there you go, not the most exciting update. But then again, how many of you can say you had a homeless man live in your car? Hopefully not many.

It’s been brought to my attention that I might be coming across as a little cold here, what with Dave being homeless and all. So allow me to clarify.

He had a home at his parent’s house, he just chose not to use it. Ever. Favouring instead the joys of sponging off other people. The cheeky scamp. Plus, my GTE was bloody comfy.