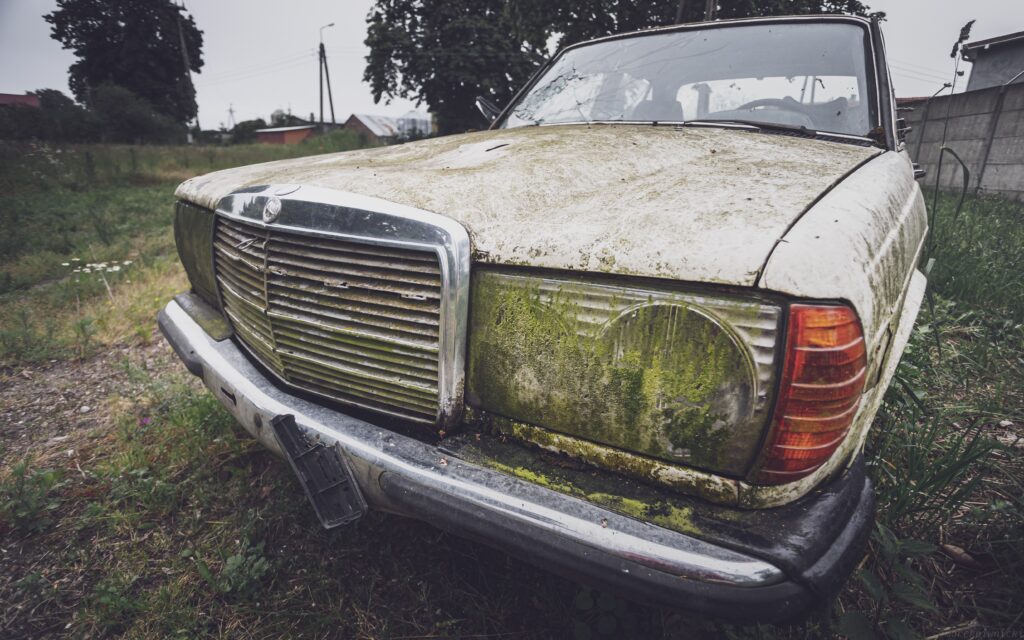 Autumn is well and truly here, bringing with it everyone’s favourite combination of a lot more rain and a whole lot less daylight. That means that all the dirt in the hidden crevices of your car is now ready to start sprouting moss.

We’ve all seen those cars that seem to be equal parts metal and vegetation, and it is not a good look. But more than that, allowing dirt and moss to accumulate in your seals reduces their effectiveness, and will cause them to break them down. The good news is that cleaning them out is simple. All you need are some soapy water (use dish soap, as it has stronger detergents), a rag and toothbrush, and a means of rinsing everything off. 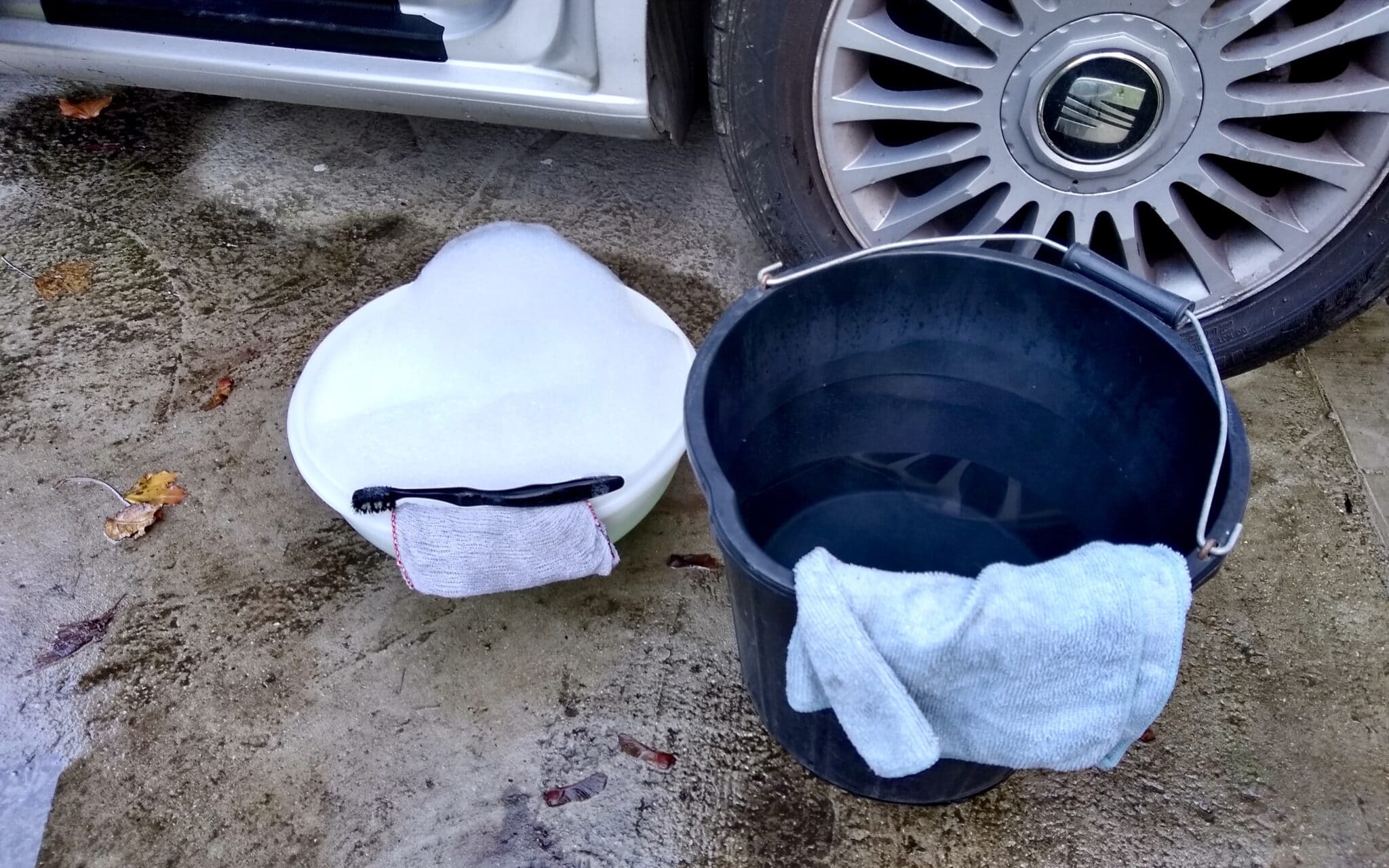 There are a number of different seals around the doors. The easiest ones to clean are the ones that go around the inside of the door frame. Unless you’ve left the doors wide open for months at a time (in which case, you will have much bigger problems), just wipe them down. The trickier ones are along the top of the door frame, which have a flap designed to catch water running off the roof and direct down the edge of the frame. These trap dirt inside, requiring more work to clean. 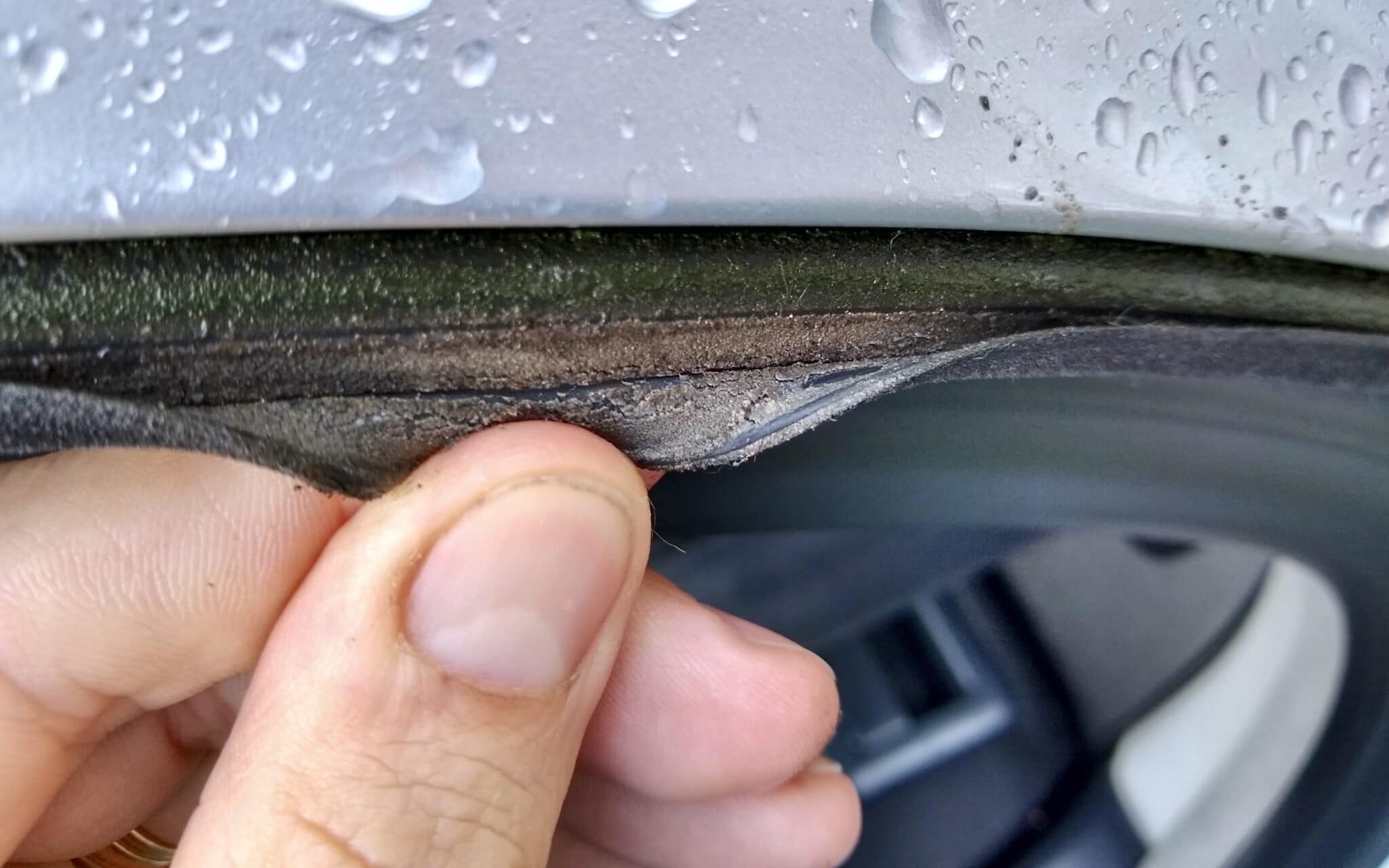 Take a textured rag, soak it in soapy water, and get a finger inside the flap of the seal. Then slowly work your way along the length of the seal, taking out as much dirt as you can. If you have not done this before, there will likely be quite a bit in there, as you can see below. You will need to do this a few times to get it perfectly clean. 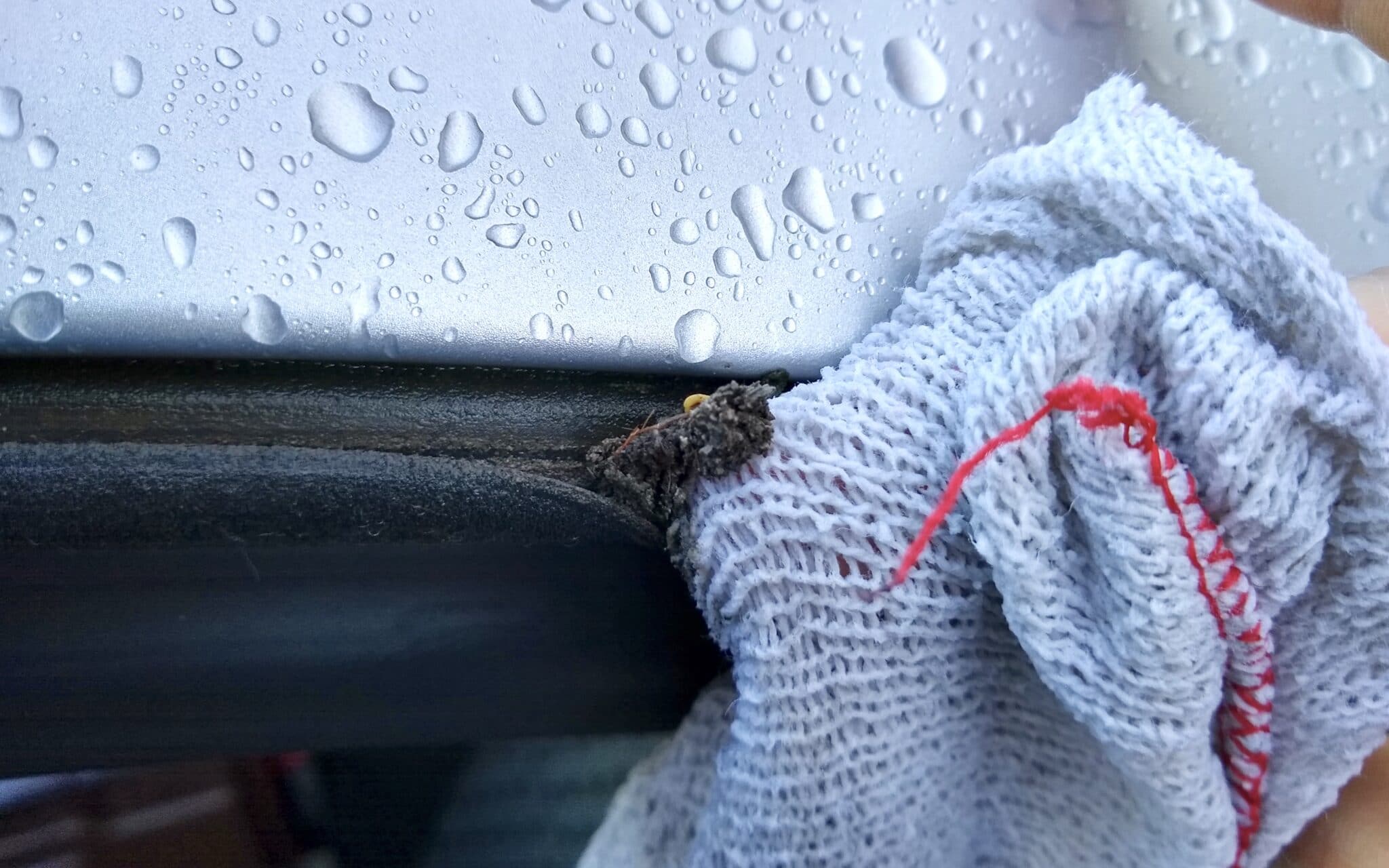 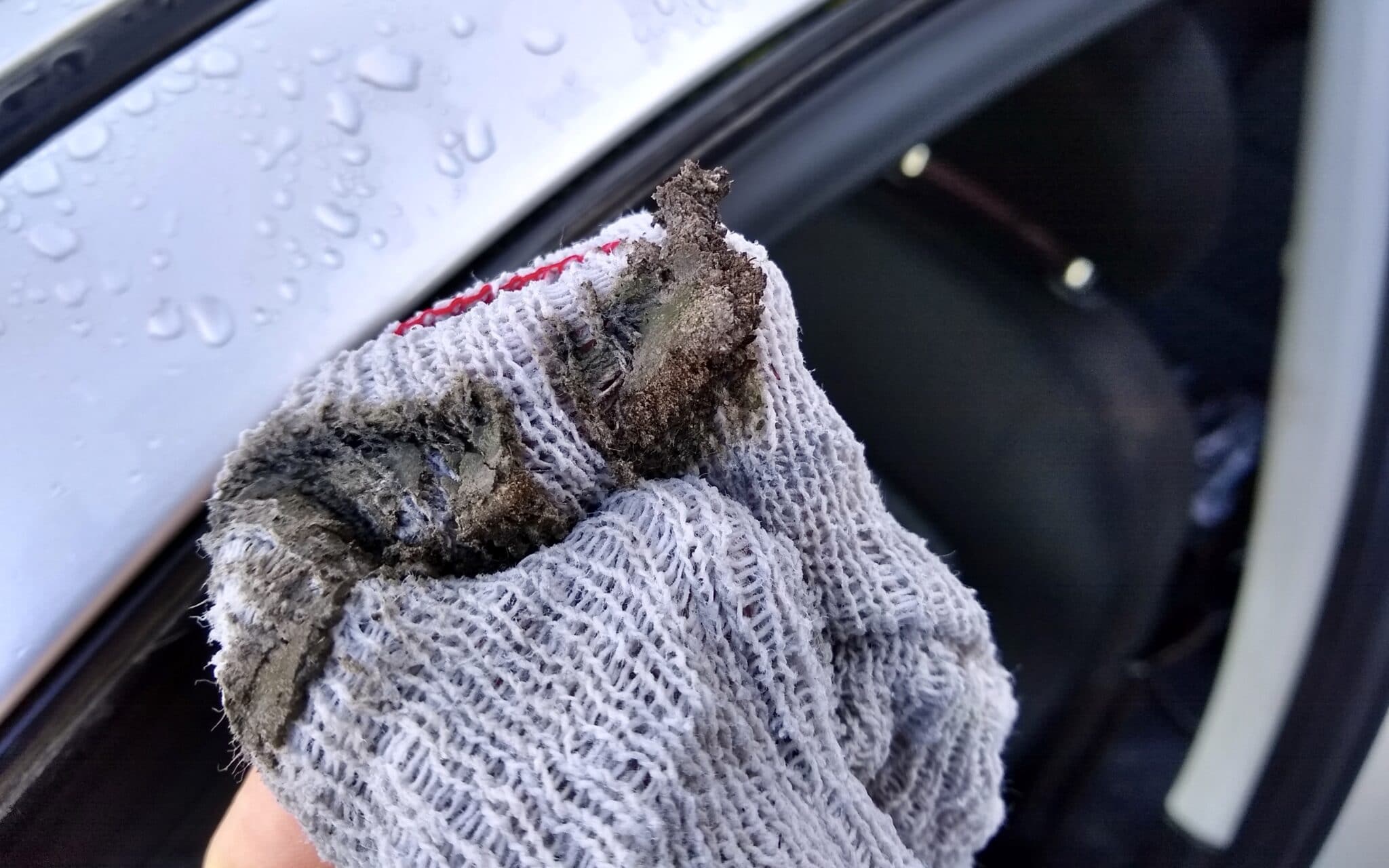 Moss can also grow where the seal meets the body of the car. To get at this, take a soft-bristled toothbrush soaked in soapy water and brush the dirt and moss away. As this is a cheap car, I am less fussy about the paint, but I found that the soft-bristled brush didn’t leave any marks at all. Again, you will need to work along the length of the seal a few times to get it clean. Once you have removed the dirt, close the door, and rinse everything off. You can see below how the loosened dirt and moss runs down the edge of the door frame. 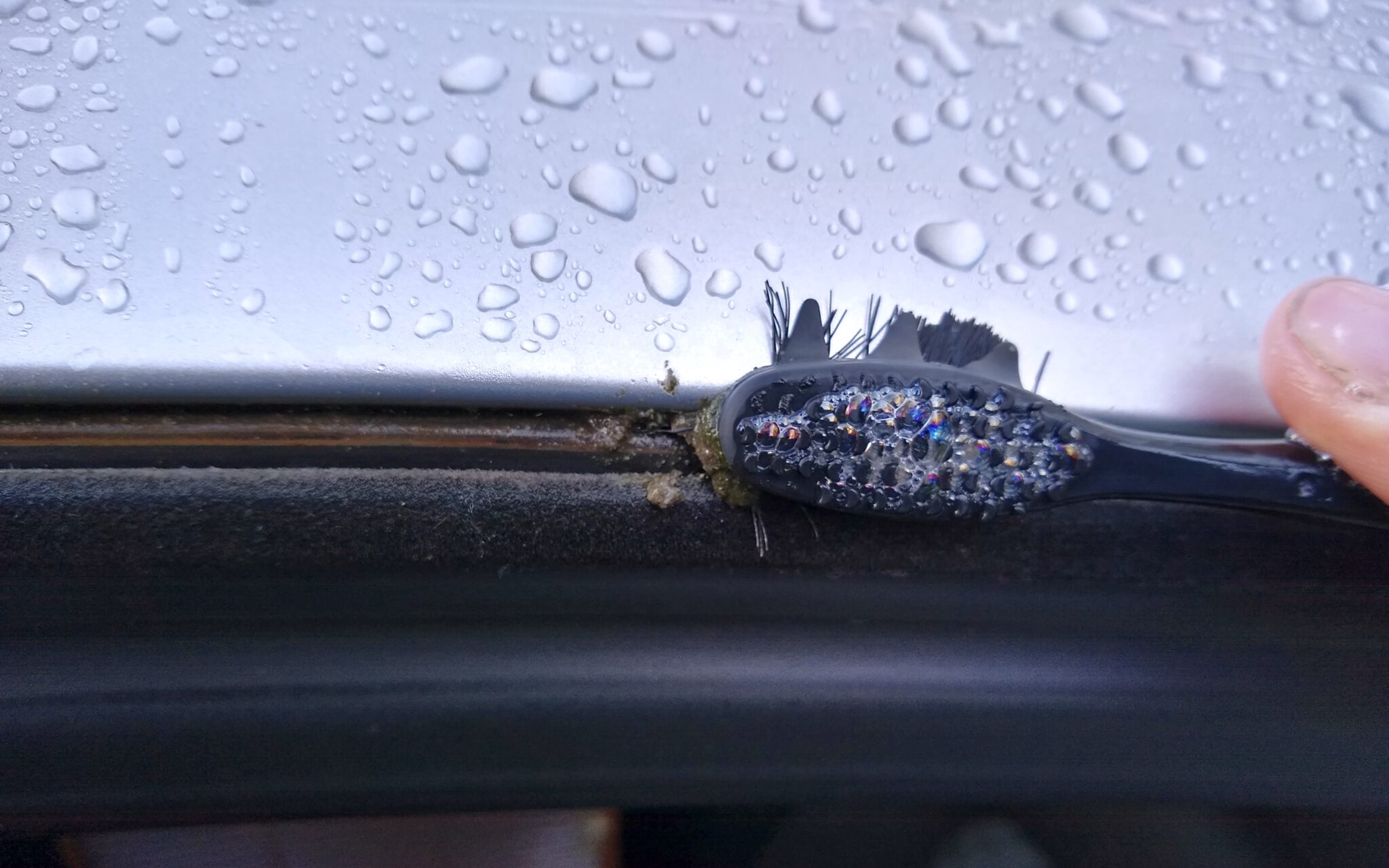 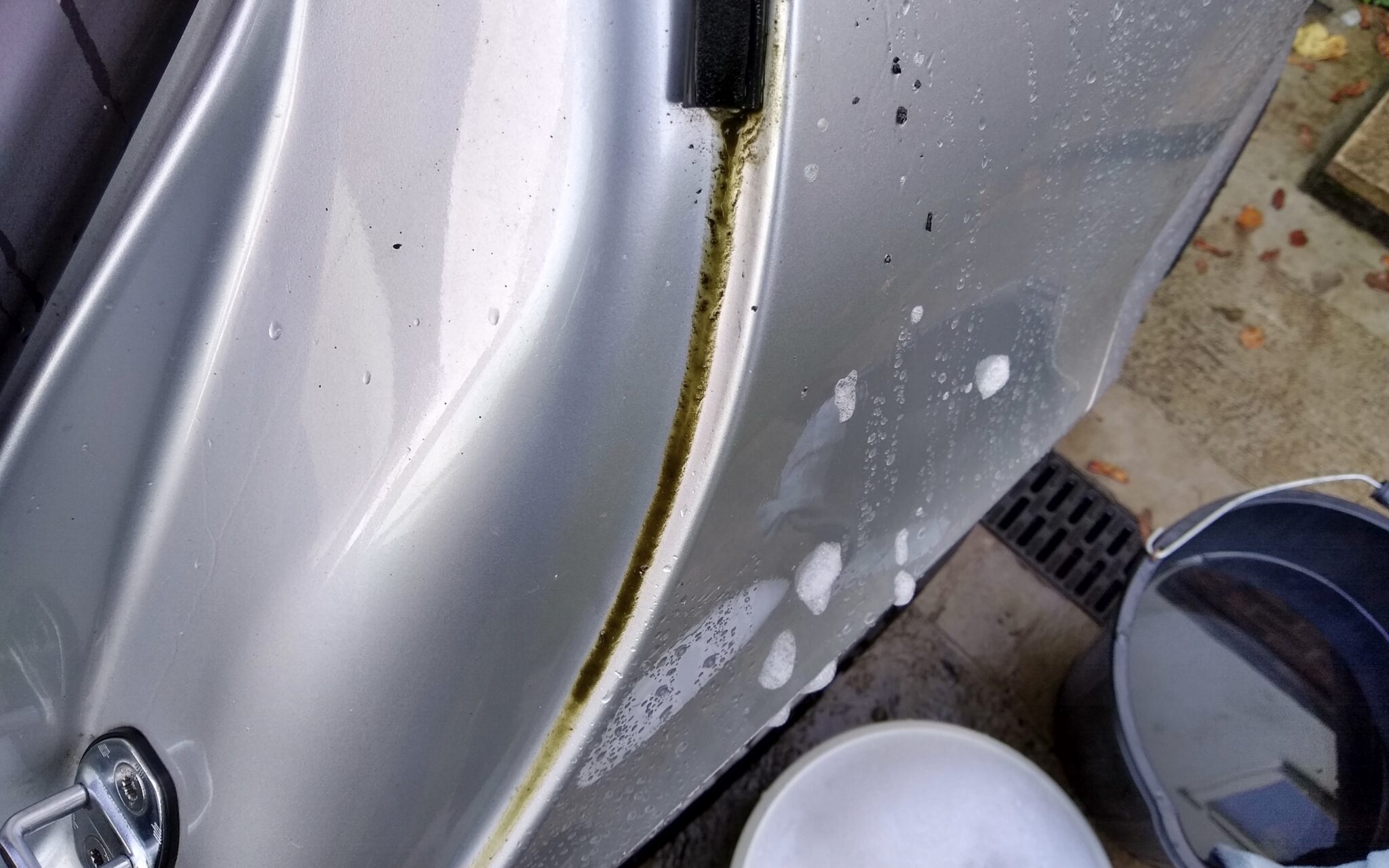 For the seals on the outside of the door, the toothbrush is your friend again. You need to brush moss off where the seal meets the window, and get at the inside of the seal around the edge of the window opening. With the latter, try and get a fingernail underneath and pull it back enough to get some of the bristles in. Give it all a good rinse when you’re done. 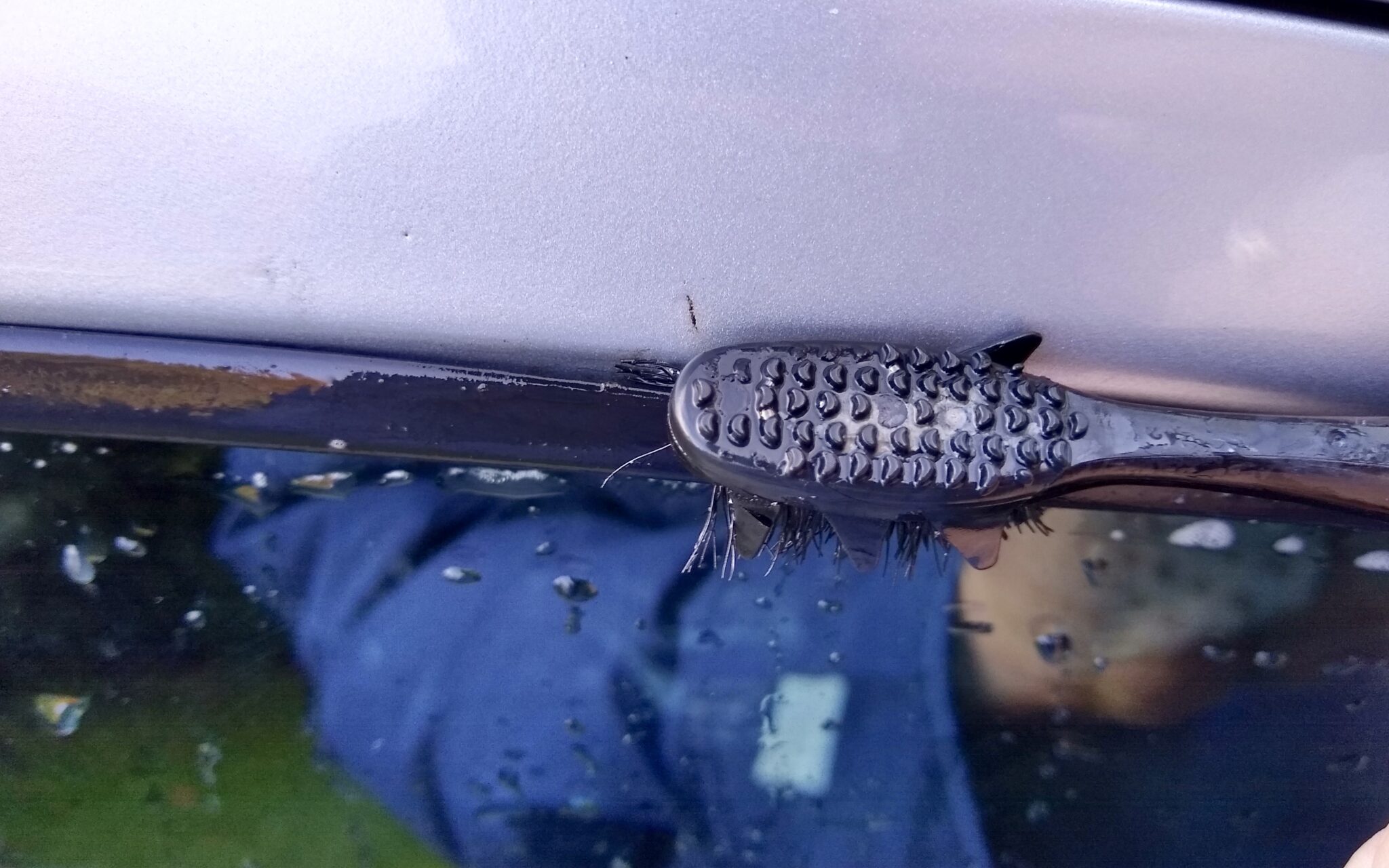 Really, you’ll want to carry out the same procedure on most of the crevices around the car, including the hatch and the windscreen, the two channels running the length of the roof, and around the headlamps and tail lights. You can see below where moss had grown along the top of the windscreen, and how much cleaner it is after a scrub. 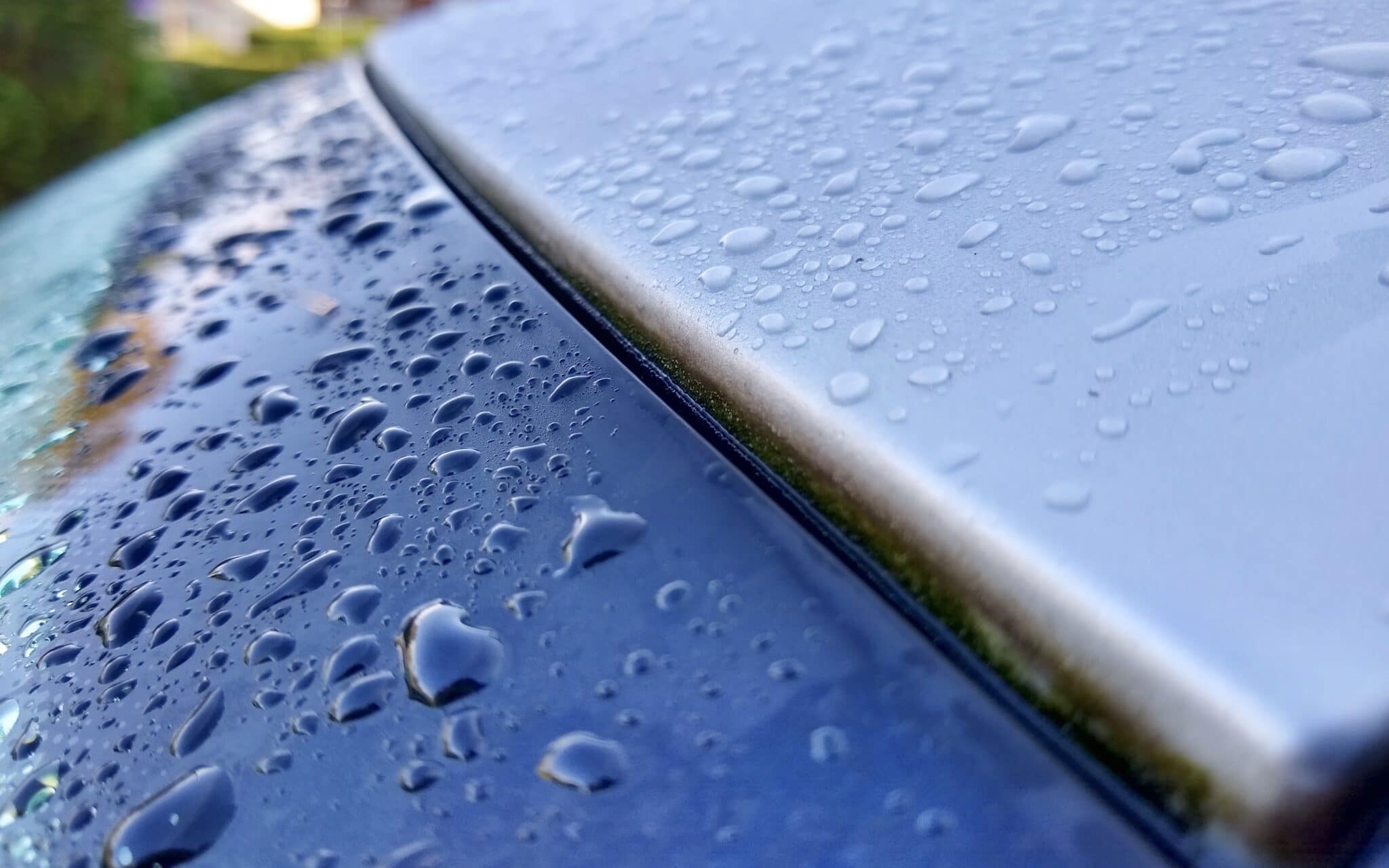 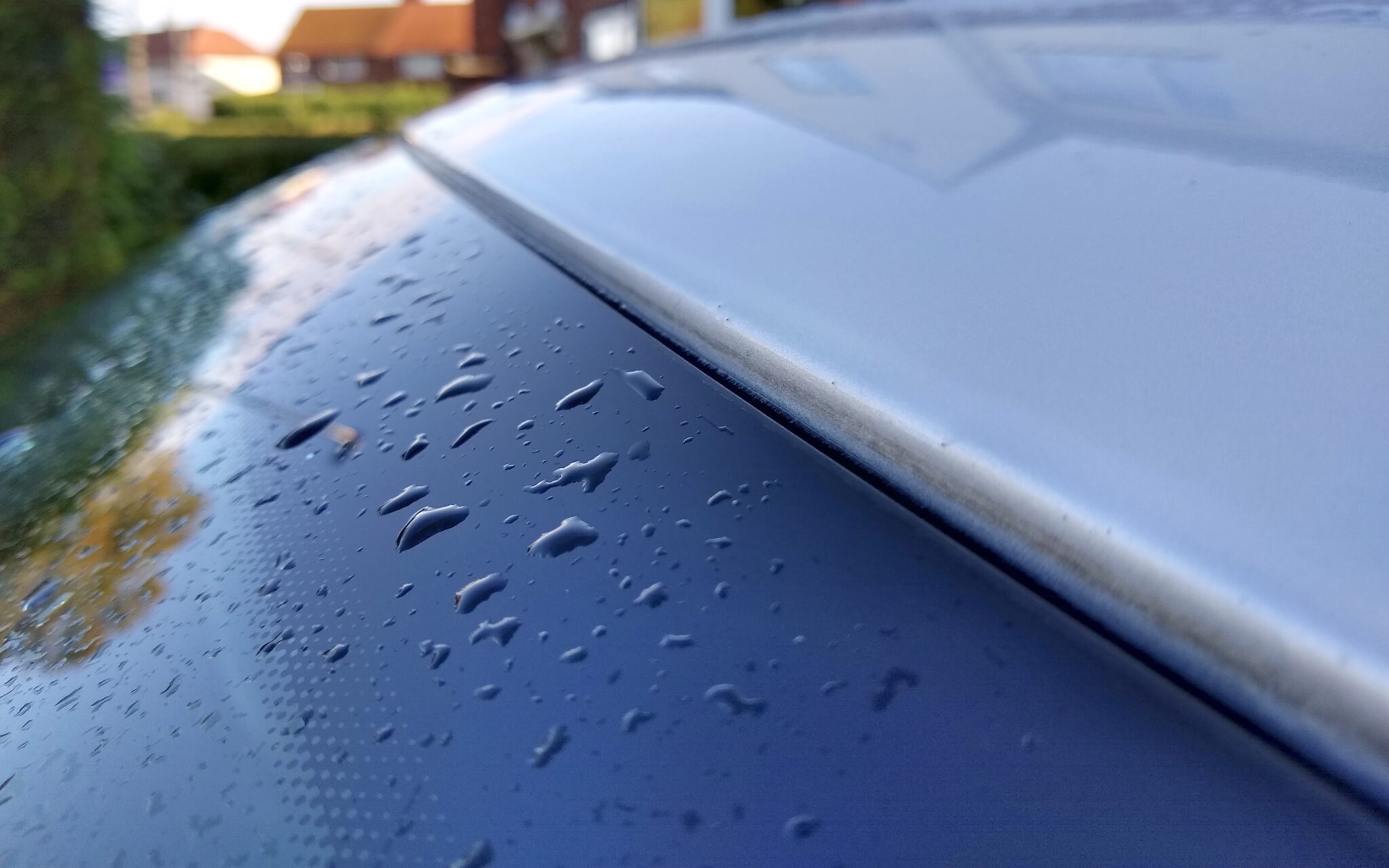 Once the seals are clean, condition them. This keeps them supple so they seal properly, and should help prevent moss from growing too quickly again. There are a number of different products you could use to do this. A German product called Gummi Pflege seems to come highly recommended, but something like Autoglym’s Vinyl and Rubber Care works too. It will get a bit messy, but spray it on liberally, and wipe it over all the seals. Don’t worry about overspray at this point (you can wash the car later), because you are just focused on getting the seals thoroughly moisturised. Leave the doors open for a bit to let the solution penetrate and dry. If you want to go one step further, you could apply a solution that actively stops moss and algae from growing again. 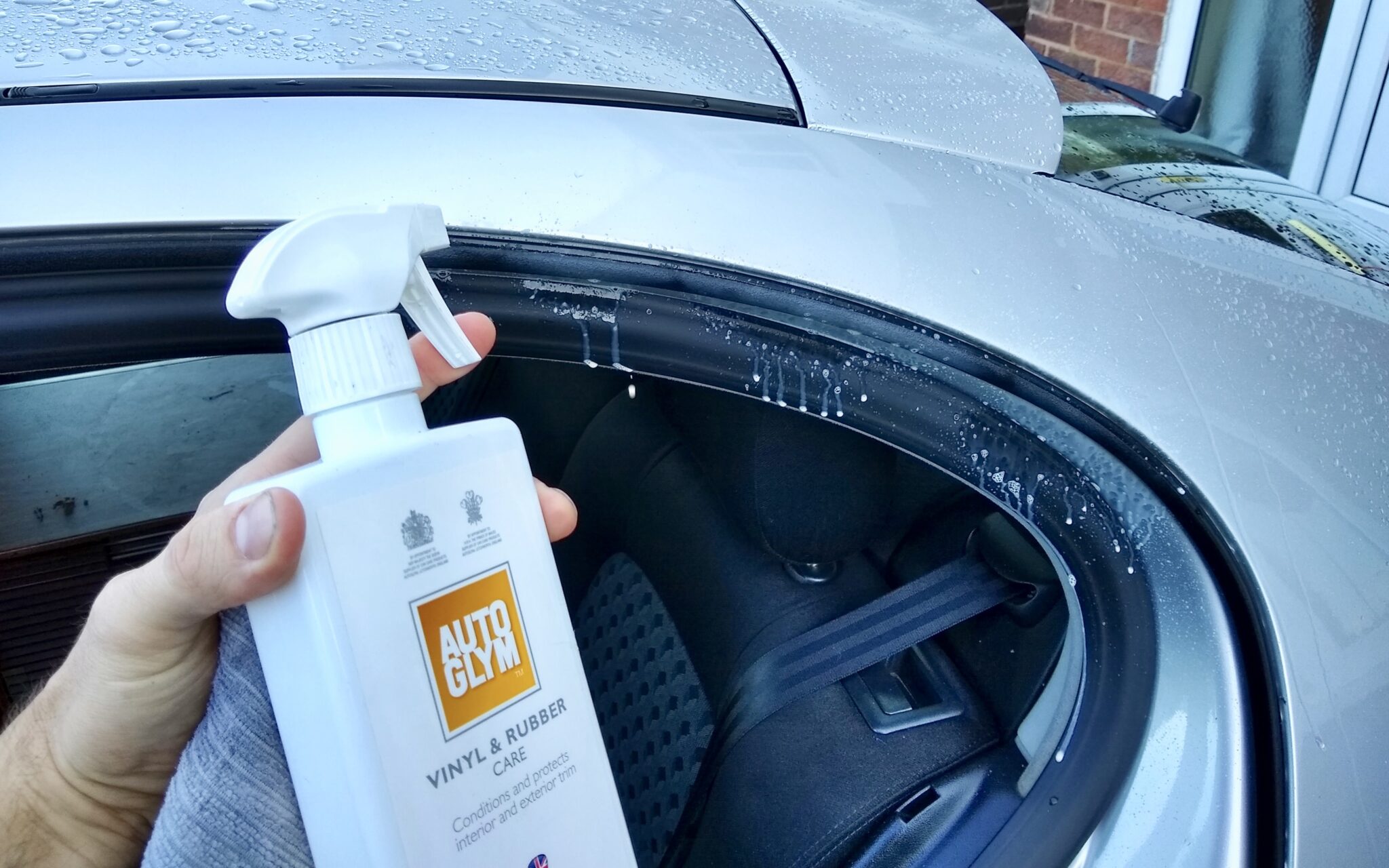 A couple of hours is all you need to clean and condition the seals around the car. That little bit of elbow grease will ensure they are healthier and longer-lasting. As a bonus, if you’ve never done this before, you will be surprised at how much better the car looks when you’re done. 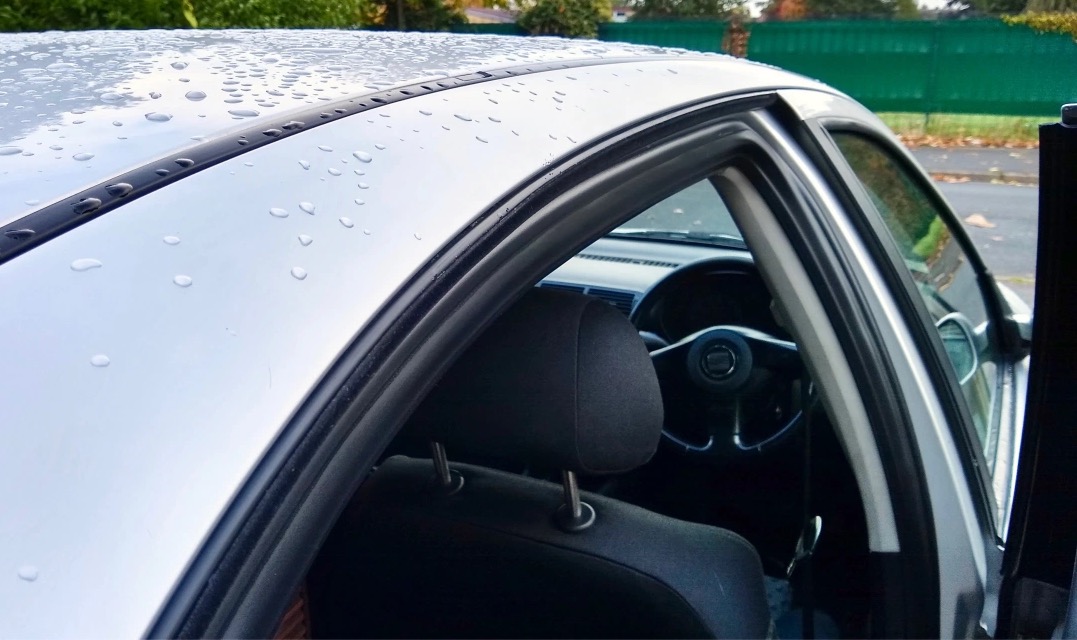