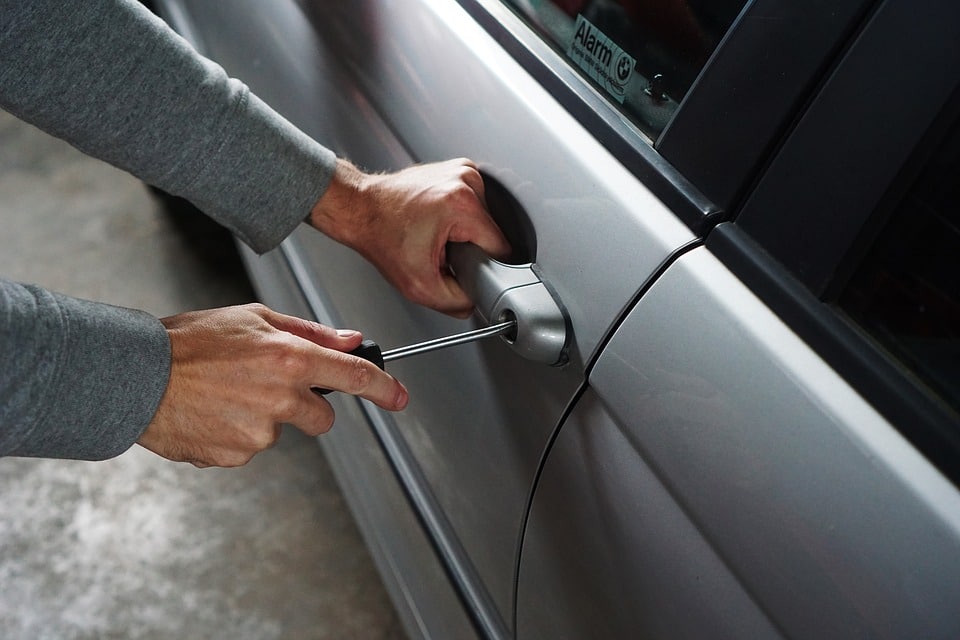 For as long as there has been cars, there has been car crime. Society’s undesirables don’t want to work hard and save the money to buy the nice things in life. They just want to steal them. It’s a much faster way to get what they want. Plus, in the case of cars, there is also a chance they’ve have their story narrated by Jamie Theakston, which is nice.

Of course, manufacturers do their utmost to stay ahead of the thieves. There are smart keys, bio-metric this and infrared that. But it doesn’t matter, because for every advance in car security, there is an equal and unwanted leap forward in the tech needed to steal them. So we put it to you that you bamboozle the thieves by adopting cars with features from the past. If your car is dripping with old-school ‘tech’ a modern day thief won’t know what to do. Trust us.

Back in the day, when there were only three channels on the TV and your Granddad’s casual racism was ‘banter’, cars were sold on the basis of how many people you could get in them. But remember, this was a time before the Renault Espace. If you said MPV your Granddad would go on a rant about the Russians. All we had were cars in the most basic sense. Saloon, generally. As such, the trick to getting more people in them was to fit them with column change transmissions. As the name suggests, this was a big stick on the steering column from which you could change gear. Manual or auto, both could be put on the column. This meant you could get three or four people in the front and the same again in the back. You’d all die if you hit so much as a paper bag, but hey ho.

Confronted with a column shifter, a modern-day thief would start crying before having to try and Snapchat his way out of the situation. Even when they were new, column-shift systems were woeful. Our ’64 Zephyr has one, and even now we’re still unsure what gear it’s in. Is second up? No, that’s towards you and down, where’s third? What? Reverse? We don’t understand and now we have a headache. So will the car thief. And while he’s in a flap, this will give you ample to time to sneak up behind him with a cricket bat.

Today’s cars are awash with technology. Not only in terms of being able to direct you anywhere an park themselves, but also in relation to the engine and how they run. Any moron can get in and drive a modern car. Old cars were more of a challenge. Every morning, you’d get in your car and be faced with a near Krypton Factor like challenge. Normally, this revolved around getting the position of the choke right. Modern cars do the choke for you, meaning all your dumb ass has to do it get in and turn the key. Back when Esther Rantzen was still on TV we had choke.

If you’re nine, and you don’t know what choke is, let us explain. Choke was a small lever in the dash, which you could pull to manually adjust the flow of air into your carburettor. By using it, you’d set the car to run rich, which meant more fuel. More fuel was good, as you’d need it to start a car in 1976 because the air was thicker back then with Bernard Manning jokes and your Mum’s horrific perfume. Without choke, the car wouldn’t start. Too much air, not enough fuel. 2019’s car thief doesn’t know this.

During the ’80s and ’90s there was a huge leap forward in vehicle technology, specifically that relating to security. Cars were being built with more electronics, and electronics brought with them a fantastic opportunity to build in security features that rendered the car useless without the key and the transponder. This was good, as it meant the car thieves had to go back to school, so to speak. They never actually went to a school. Most of them think brie is the second letter of the alphabet.

Sadly though, despite cars getting more secure, the thieves soon caught up. Mainly because ’80s and ’90s vehicle technology was about as complicated as a Casio Calculator Watch. The automotive aftermarket soon saw this as an opportunity to jump in with new, bolt-on security devices that would keep the nation’s XR3i and GTE models safe.

You could go for a Clifford Alarm. A big name at the time, Clifford boasted the ultimate in vehicle security. The reality was a wired cancer that left owner’s car behaving in a way to suggest they’d been possessed. And owning a car shouldn’t need an exorcist. The other option was the bullet immobiliser. These simple devices required the driver to press a keyring fob into a port located somewhere within the car. Once held there for a few seconds, the car could be started. Simple, but effective. Even more so if you put the port somewhere really well hidden, like in the glove box, or behind a blank button, or under the cat. Today’s thief won’t think of THAT.

Back when the music charts were heavily reliant on brass instruments, and back when your Nan could still bend over without needing medical assistance, car gearboxes were horrible old bastards. Modern gearboxes could make even the most ham-fisted of driver think he’s Lewis Hamilton (though as such, we shouldn’t say ham. Erm, quinoa-fisted?). That’s the beauty of either being a lighting fast DSG, dual clutch jobby, or via the magic of the synchromesh. Back in the day, we had no such thing.

The synchromesh is what lets you change gears without destroying the gears. Yes, the clutch is important as this disengages the ‘box from the flywheel, but it’s the synchromesh that looks after the goings on within the ‘box. It synchronises the gear speed and lets them mesh together without incident. Hard to see where the name comes from, really. Without it, you have to rev-match and pray you can go from one gear to another without breaking the cogs. Get it wrong and it’ll vibrate so hard it’ll break your wrist. The modern thief won’t know what’s going on. Instead, he’ll think the car is broken and he’ll leave it at the and of your road in disgust.

We love Saabs here at Not £2 Grand. They’re well built, they’re fast in turbo guise, they’re handsome in a ugly kind of way and they’re safe. That said, they are also weird. More weird than that kid who sat in the corner of your Year 10 science lessons, trying to suck the gas out of a Bunsen burner while also incessantly asking the teacher if he could hold the Mercury. Next to a Saab, he looked normal.

But weird is good, especially when it comes to vehicle security. We don’t think Saab designed their cars to be secure deliberately. It was more just a case of Saab doing things in a weird way because, well, because Saab. A case in point would be the ignition, which, logically, would be on the steering column or maybe on the dash like in a Mercedes-Benz. Saab didn’t subscribe to doing things like everyone else. So instead, engineers put the ignition down by the handbrake. Right. Okay. Yeah.

That on its own would be enough to bamboozle a car thief, but there’s more. In order to take they keys out before you left the car, you had to put your Saab into reverse. When you took the key out, you locked it in gear at the same time. This means that if a thief does by some miracle manage to get your Saab started, he’s only going to make it as far as the driveway of the adjacent house. Brilliant. Those wonderful, crazy Swedes.