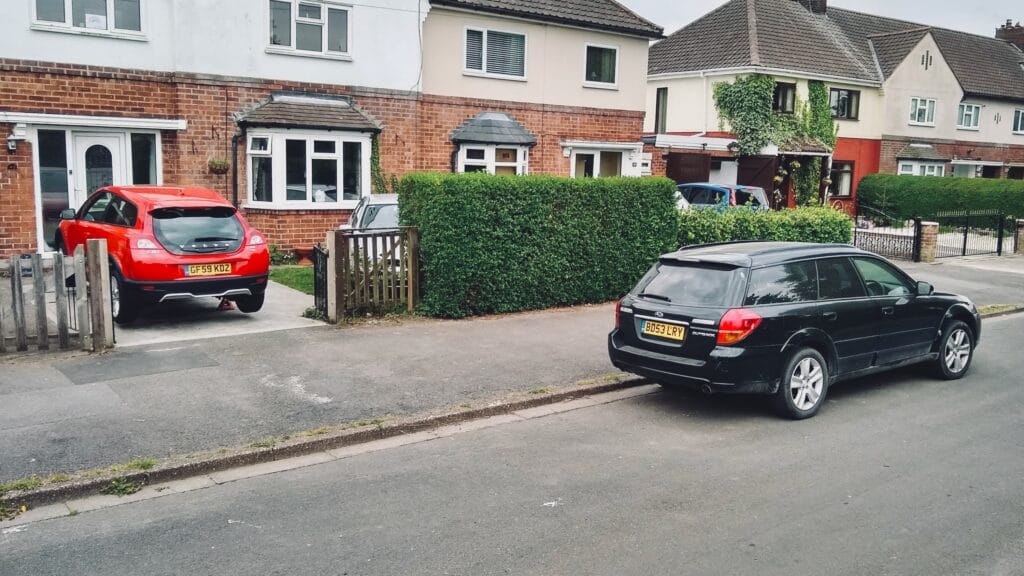 Having used my own cars for illustrative purposes on occasion, it is time I introduced you properly to my little fleet. After all, we’re not just about telling you what to buy here, but we put our money where our mouths are. If nothing else, let it serve as just a few more examples of the range of motors you can enjoy for under £2000.

I picked up this Leon in 2016, and I must concede that very little thought went into purchasing this car. My wife wanted a smaller car, and I’d always been intrigued by this era of Leon. A few days of casual searching yielded this example. It had the 180bhp 1.8T, 73,000 miles, a decent MOT history, and a good price. In a moment of impulse, I submitted an offer, which was accepted. The next day, I drove to Sheffield with £950 in my pocket, and the deal was done. 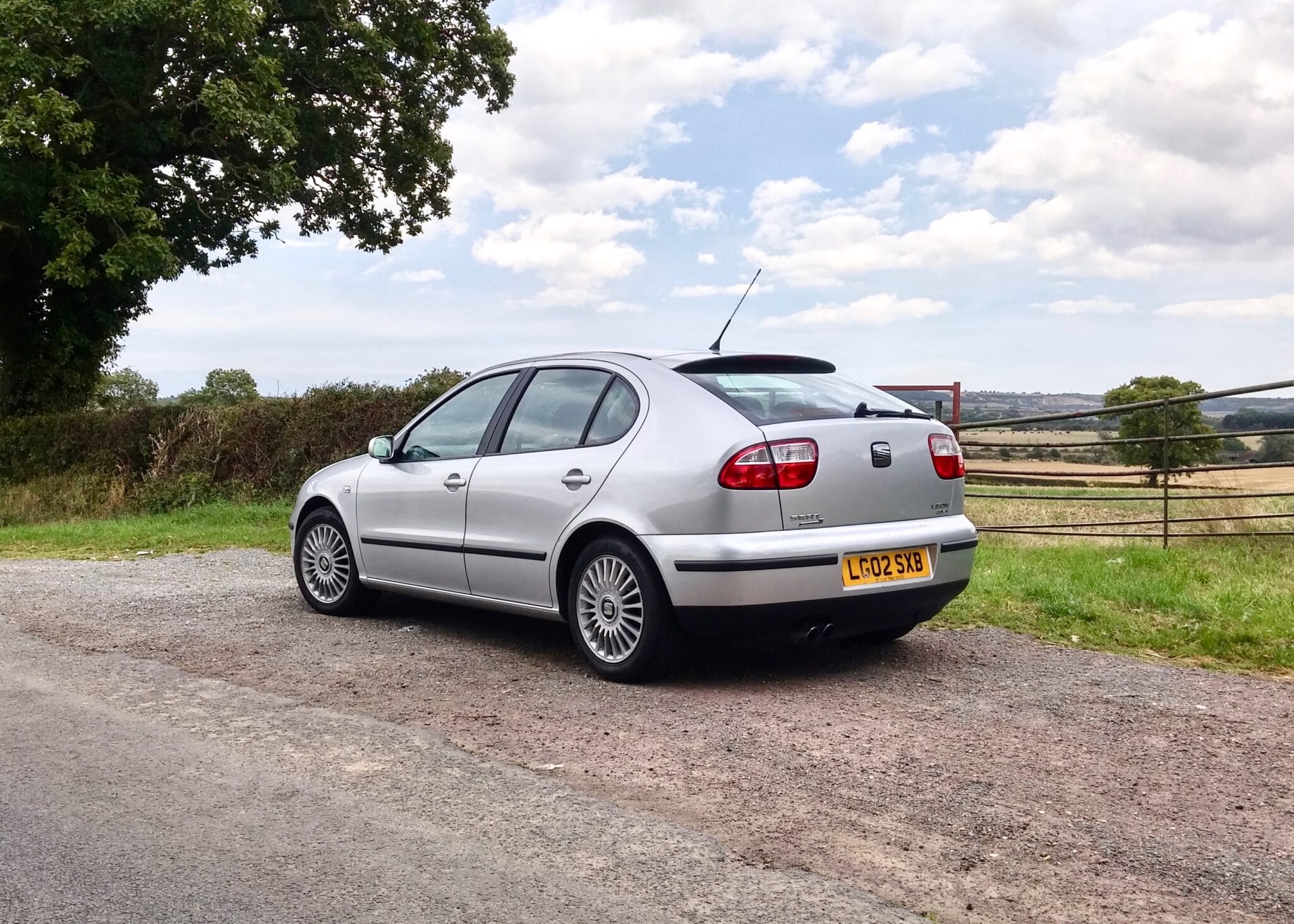 Admittedly, it took me a long time to really warm up to this car. Yes, 180bhp of turbo power and a close ratio six-speed provide a decent amount of fun, and it does handle very well for what is basically a tweaked Golf. But it has needed a number of frankly irritating things to bring it to a point where I was happy with it. For instance, I had to replace some breather pipes, which were a massive pain due to the design of the engine. I spent a long time chasing a water ingress problem, redoing all the door seals, as well as the seals around the pollen filter housing and ECU housing, and clearing out all the drains. It was loud inside, remedied by putting some sound damping material on the inside of the door cards. And it is sensitive to the suspension being just right, so any bit that’s loose or worn really impacts the drive. It wasn’t until I’d sorted these issues that I really started to appreciate the Leon. 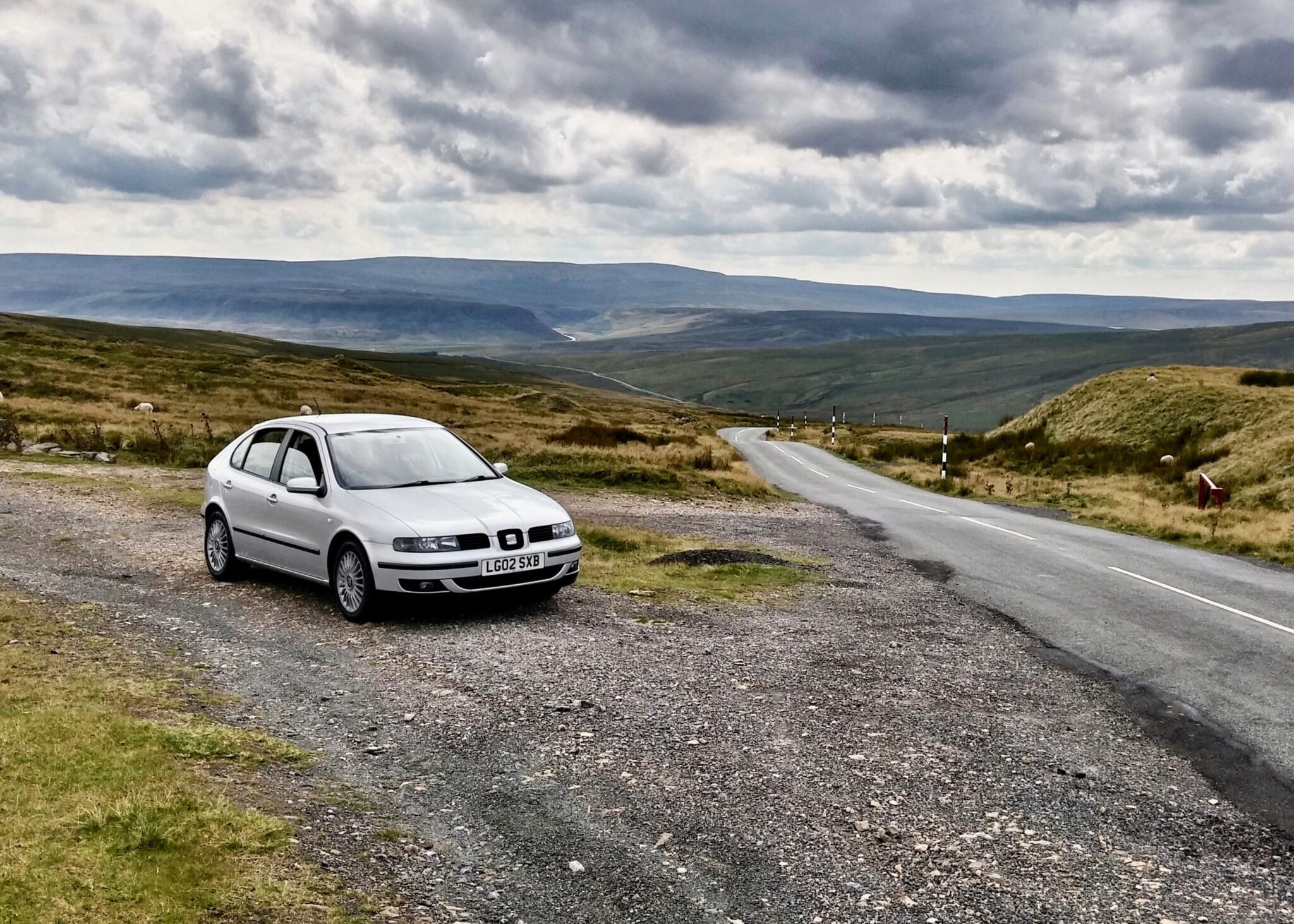 But for all its flaws, there is one word that defines my four years with this car: Reliability. I probably paid a bit too much for it, but aside from the niggles above, it really hasn’t needed anything but consumables. And since I tackle those jobs myself, it’s been cheap to run. It just spent four months parked in my garden because of lockdown, after which it fired up the first time. I taxed it, took it for a 50-mile jaunt, and it just got on and did what it always does, like nothing had happened.

No doubt you can find more sorted examples. Mine is a bit rough round the edges, and the bodywork in particular needs attention. That’s down to me though – I’m not skilled in that area, and I always gravitate towards the mechanical side of things. And to a degree, I don’t care. It’s on 90,000 miles now, and it has never failed to start, it has never skipped a beat, it doesn’t use any oil, and it will hum away smoothly along the motorway all day.

Of course, what this car is really about is hitting your favourite B-road on a cool, summer night, dropping a couple of gears, and hearing the turbo whistle away as if to say, ‘Yes! Let’s do this.’ And it will, over and over again, without any fuss.

In the other corner is my Subaru. And yes, reader, this too was purchased with very little thought. After deciding to sell my E39, I had failed to actually carry that plan through. Eventually I realised that, until I had something different on my driveway, I wasn’t going to either. So I jumped on Ebay, and for some reason, felt inspired to search only by engine size. This Outback was the first search result. 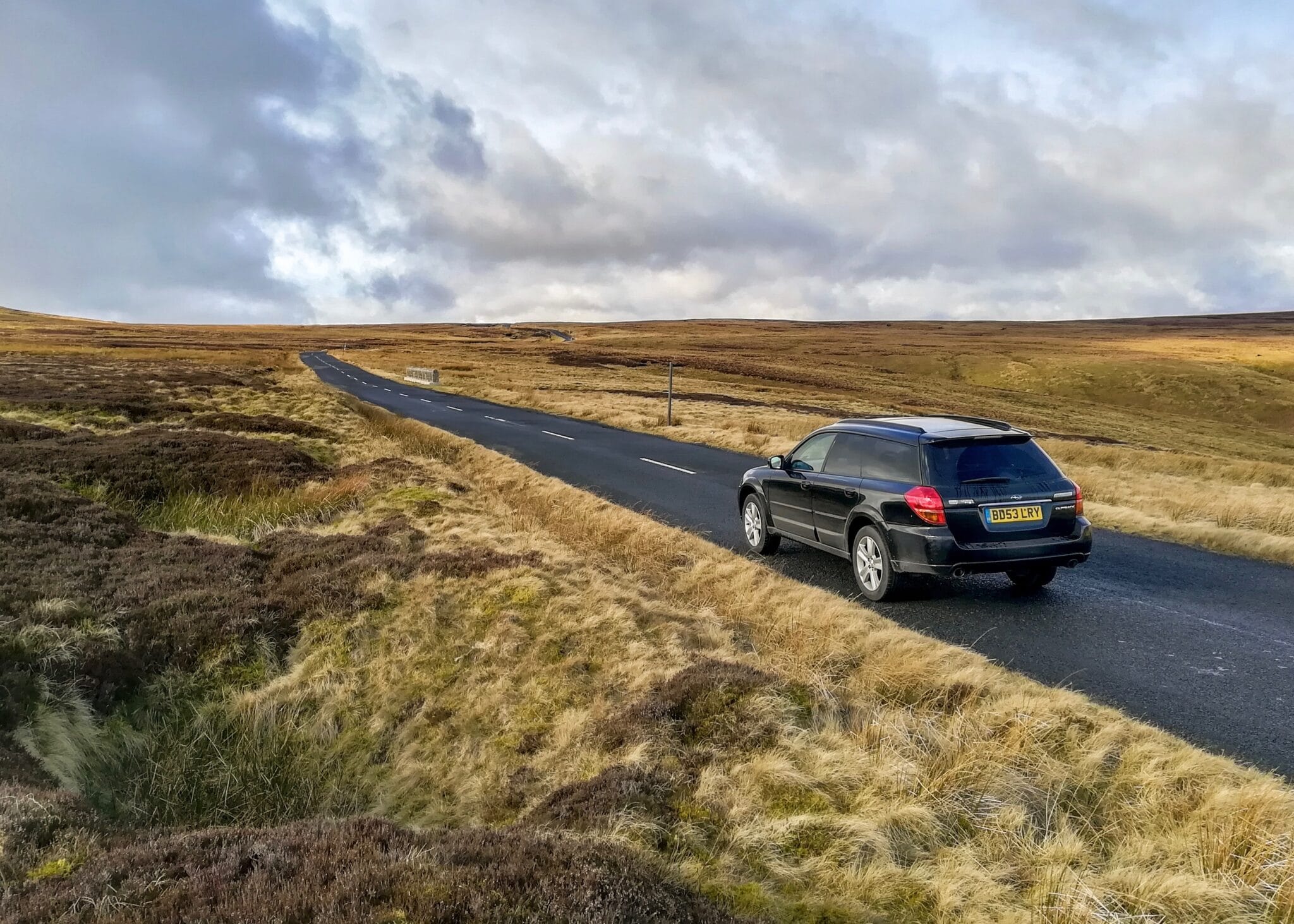 I had never really considered a Subaru before. But I was intrigued by what I saw. It had 138k on the clock, it looked clean, and again, had a good MOT history. After some in-depth research (a few minutes on Google), I realised that the 3.0L H6 was was the right spec for this car. I read a bit more, mulled it over the next day, and then submitted what I considered to be quite a low offer on the asking price. To my surprise, the seller accepted my £1200, and I booked a train to London for the following Saturday morning.

For the price, I was not expecting perfection. And I didn’t get it – the driver’s seat had a tear, it needed a service, a wheel bearing was going, and the inner CV gaiters on the front driveshafts were split. But I these were things I could easily attend to myself. 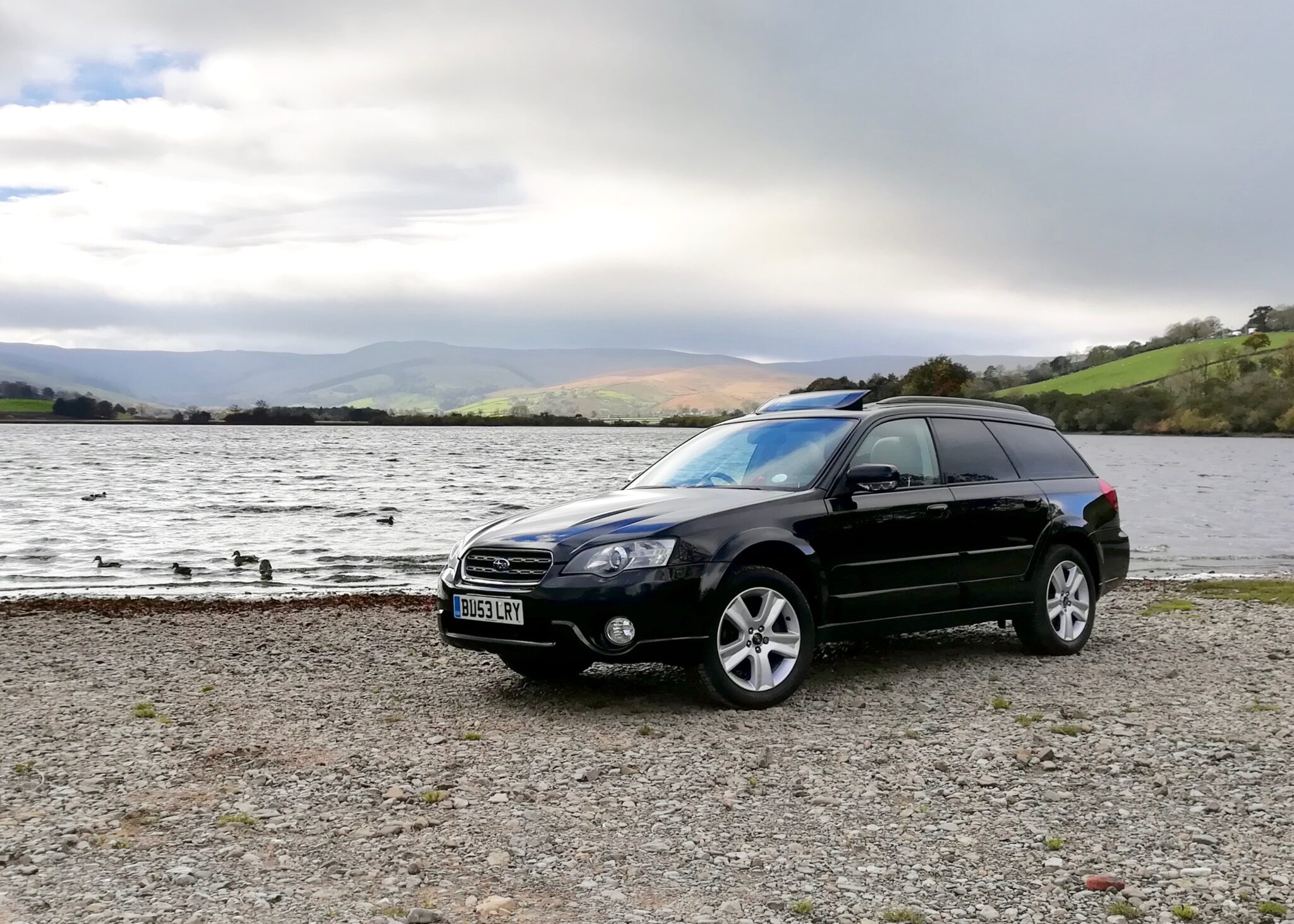 Other than that, the 200-mile drive home yielded nothing but delight. I was rather surprised at just how good of a car it was. The engine was powerful and smooth, it rode quietly at motorway speeds, it handled decently for a lifted estate, and it was comfortable.

After getting it home, servicing it, and tackling the mechanical bits that needed doing, I got in and started driving. And I haven’t stopped since. I’m on 155,000 miles now, and this thing just keeps on giving. It’s been up and down the country several times, it has been to France (and was supposed to do so again this year), it has hauled loads of stuff. It has tackled snow, it has been off-road. It’s got some bigger scuffs thanks to being driven into twice, it was punished pretty mercilessly during lockdown, making lots of short grocery runs. And I would still get in it tomorrow and drive across the continent. 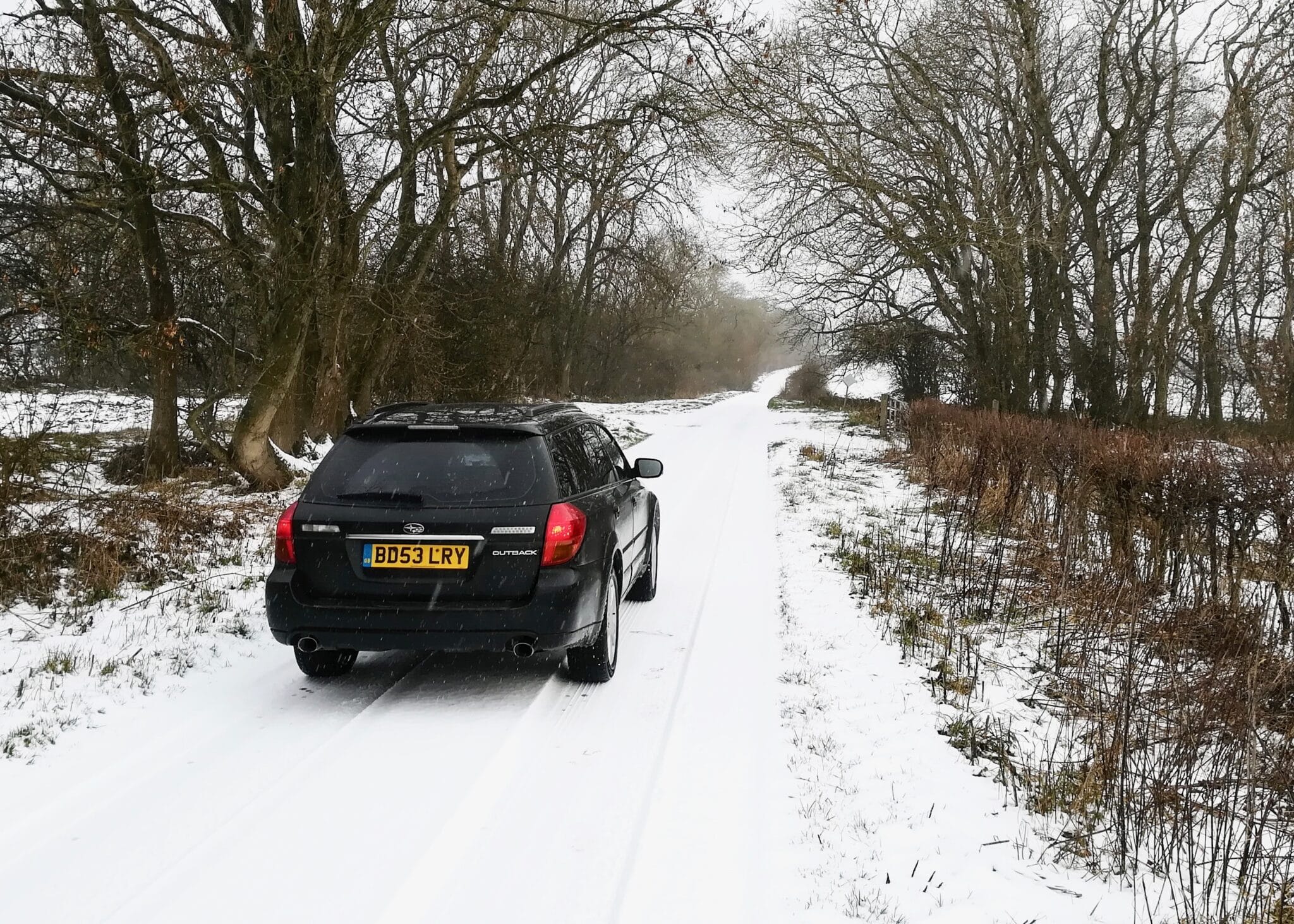 Sure, if I had the time, money, or inclination, I’d set about making it better. But you know how people sometimes talk about needing a car that you can just get in drive and not really think about? This is that car. It simply does what I need it to, every time, without complaint. It is probably the most competent and capable car I’ve owned. I honestly love it, and have no plans to do anything else but keep driving it.

(The header image, incidentally, is the only photo I could find of the the cars together. Don’t ask about the C30. We don’t talk about that.)