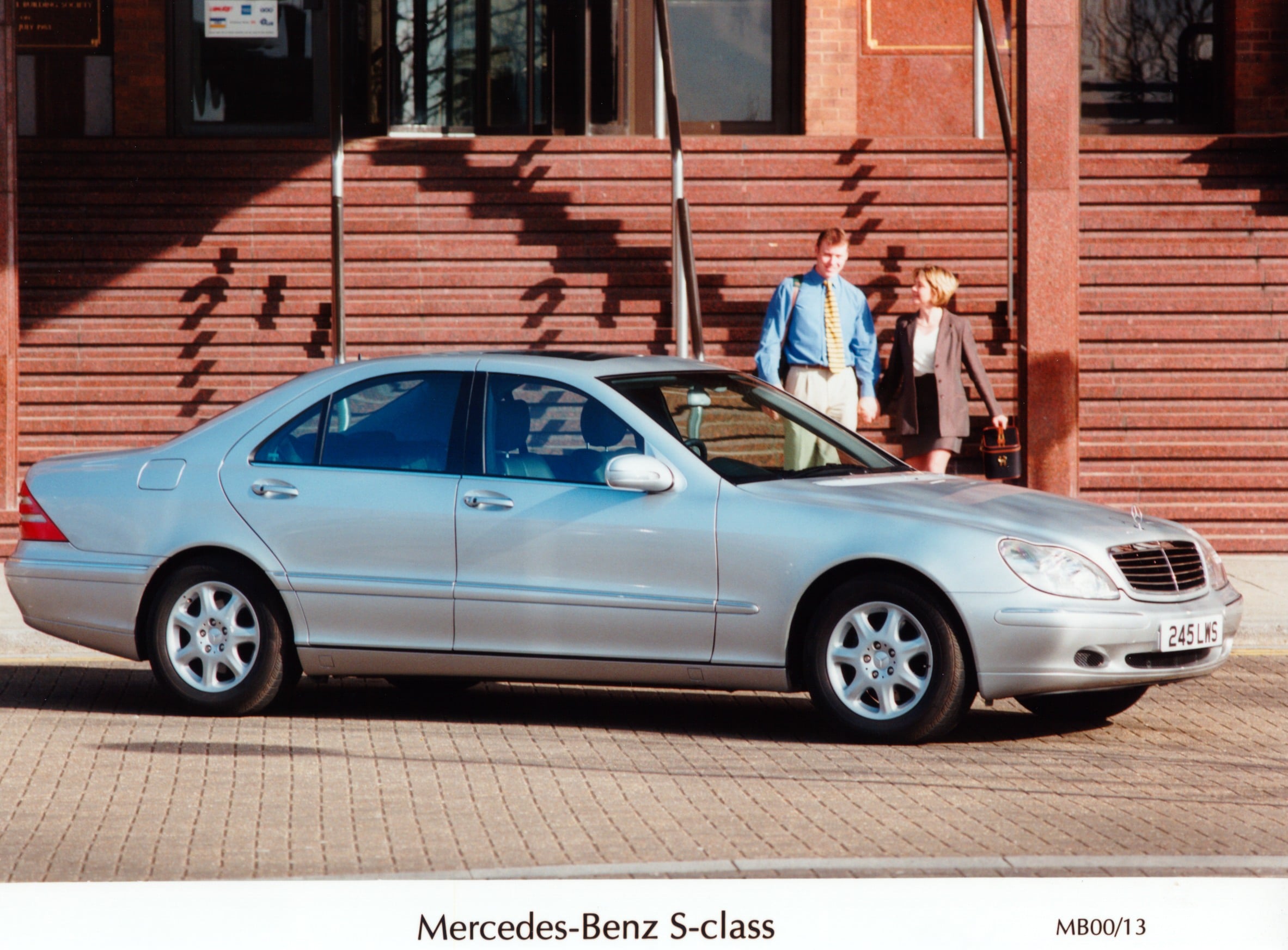 Are the neighbours getting right on your nerves? Does the new lad at work keep getting way above his station, firing up every one of your anger nodules as he does so? Do you sigh and punch the steering wheel of your 2001 Renault Clio each time another road user fails to give you the respect you damn well deserve?

Yeah? Well, there’s a car out there that can push those frustrations firmly into the past, leaving you to look ahead to a future of fear, intimidation and, er… a completely fabricated reputation detailing how you’re simply not to be messed with.

Said car will also bankrupt you every time you fill it up, it won’t fit on the driveway nearly as well as the 2001 Clio and it will also break down, lots, for no apparent reason. But sod the negatives, it’s a W220 Mercedes-Benz S Class, and that’s well sick. In a good way. Like da kids say.

See those two up there? That’s John and Debbie. He’s a cashier at Wilkos and she’s a teaching assistant. Nice people actually, they have three cats and John likes to paint watercolours. They holiday in Wales occasionally. Self catering, obviously.

They used to drive a Vauxhall Meriva, but one day John had enough of returning to his car after a long day at work, only to find it covered in parking dents and trolley scuffs. He was also sick of Calum, the summer temp at Wilkos, being a dick. John sold the Meriva for £2000 and bought an S320 S Class. Nobody parks or walks near it, or dares to even touch it. John’s boss, Eric, now feels threatened by John’s apparent success and wealth. The irony is, John was always happy on the tills, but Eric’s insecurities will soon see John take his job. As for Calum, he quit the very day John turned up in the W220. Gobby little sod simply couldn’t handle the authority of such a car.

That’s the power of the S Class.

When Debbie parks it in Little Hills Primary’s car park, the bullies cry. Mainly because a well circulated rumour about what Dabbie keeps in the boot has put the fear of God into them. You don’t get that with a Meriva.

The images above are to illustrate what’s within an S Class. It’s okay, normally clad with leather and a vast array of buttons and switches. A great many of these probably won’t work if you buy a cheap example.

Just to clarify; you can get a W220 for £1000 if you look hard enough. We could go into the many, many reasons why you should avoid such a car, but we won’t. Just trust us when we say it would be a bad idea. Also, a lot of them are ex-fleet or even worse, ex-taxi (mostly S320CDi models with a milliontyandtwentysixthousand miles on the clock) and again, you should probably avoid those, too.

Your best bet is to commit to the Meriva in your life – whatever that may be – and wait, poised by the classifieds, for the right car to come up. These days, the honest, private W220s are starting to creep into the sub £2k arena. Most with full history and some with less than 100k on the clock. Something like a 420SE (that’s a V8, kids) with all the toys, yes, that would be nice. Nice enough to put your smug neighbours in their place, that’s for sure.

In case you’re not overly familiar with the S Class, it’s the flagship car for Mercedes-Benz. Always has been and probably always will be. The company uses it to roll out new and cutting edge technology in the automotive world, which become commonplace for the majority of car builders thereafter. This has been the case for years…

*First use of ABS in a production car? S Class.

It’s an impressive machine. A ten or eleven year old S Class is still infinitely better than whatever your sister’s smug boyfriend drives. Remind him of that. He’s a right berk.

It’s fitted with so many toys and gizmos, you’d be forgiven for thinking someone filled the innards with Maplin’s stock and glue before shaking it. Seats, windows, sat nav, head-rests, mirrors, rear blind, so on and so forth, they’re all electrically operated.

That’s where the problems come in though. You see, the W220 was built during a time when Mercedes-Benz was distracted or simply not paying attention. Ergo, cars of the immediate 2000 era weren’t too great in terms of build quality. Luckily for you, if a car has survived this long, it’s probably been fixed at great expense by a previous owner. Do watch out though, because we’d hate for you to come unstuck by investing in a pup. After all, parking in your boss’s space is pure rebellion. Breaking down in it is embarrassing.

*The air suspension fails. It’s funny at first, you know, because it looks ‘slammed’ or whatever it is the youth of today say. It’s not funny though, because it’ll be the end of a cheap W220. A £2000 bill on a £80,000 car is something you can justify when the car is still worth that amount. When it’s worth £4.50, you just throw it in the bin. Where it will rust some more.

*The electrics, while plentiful, were shocking. Literally in some cases. If a button has stopped working, you can be sure the fuse won’t be the issue. Just get used to a life without whatever feature has failed.

*They’re expensive to run. DUUH! It’s a massive Merc with a stonking great V8 or straight six. Sell a child, or your house. That should get you enough fuel to get to the shops.

That’s an AMG version. John and Debbie can’t afford that

So, should you buy one? Probably not. It’ll bankrupt you.

That’s not the N2G way of looking at things though, so yes, go forth and buy one. Be John, be Debbie, be the living embodiment of being a ‘someone’, whatever that means. Be the one who commands the roads heading toward and passing beneath the two tons of German automobile you just bought. Be the one who pulls onto the drive, gets out of the car, slams the door and then looks your neighbour of opposite gender up… and down. All while slowly sucking air in through your teeth with one eyebrow raised.

Be perceived as a master of industry, a leader of men, a sultan or a chauffeur driven teen starlet (you’ll need a driver for this to work, the W220’s cruise control isn’t that good).

Just don’t be the one who complains to us when you do buy one… and its engine implodes… and Debbie leaves you… and you can’t buy your Meriva back.