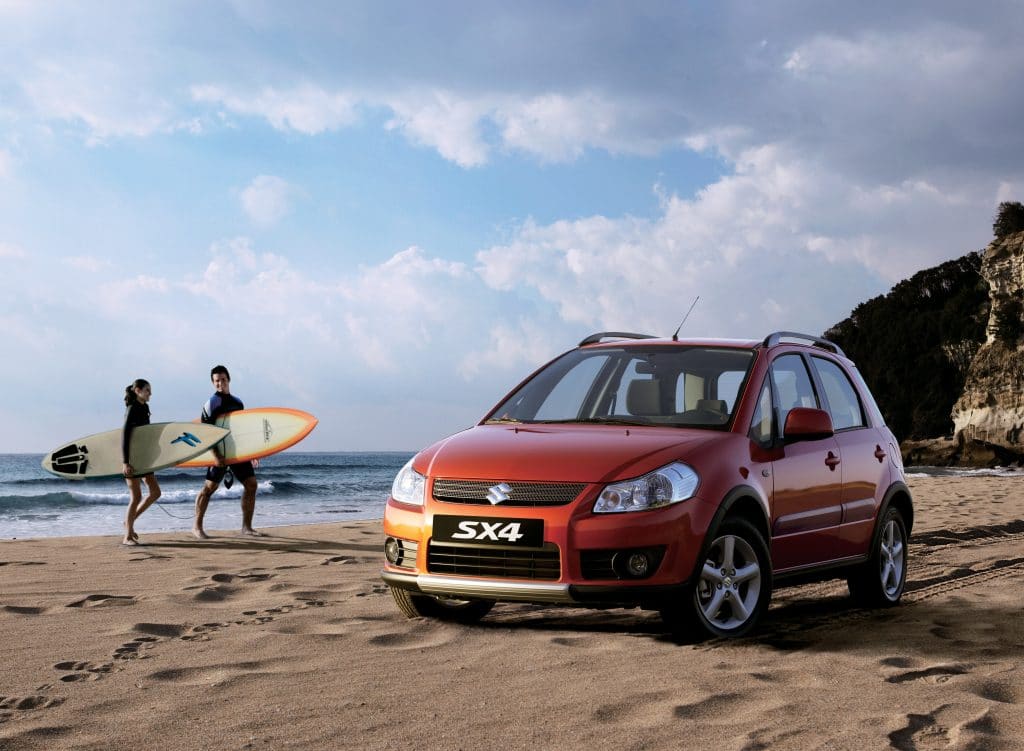 It’s no secret that we like a Suzuki here at Not 2 Grand. They’re a bit of an oddity, but given that our dad says the same about us, it makes sense that we like them. Kindred spirits, or something like that.

Anyway, paternal abuse aside, here’s the next Suziki to grace our pages – the chunky little SX4. It’s a weird little soft-roader kind of thing that was actually available with four-wheel drive. And it wasn’t a token gesture, it was a clever system that actually worked if you left the A14 in favour of a field. Though we should preface this by saying your budget will probably only stretch to a front-wheel drive version. But that’s no bad thing. It’s a good little car.

Wait, isn’t that a Fiat?

Well, yeah. The particularly nerdy amongst you might recognise the SX4 as a Fiat Sedici. And that’s because it was was. You see, Suzuki and Fiat co-developed the car to save a bit of cash. Both big names in small cars, it made sense, even if the pairing did seem a little odd at the time.

In reality, the SX4 is largely Suzuki, but with Fiat engines. You’d think common sense would dictate they’d do it the other way around, but they didn’t, so this is what we’ve got. And happily, the engines were quite reliable.

So what is it?

Honestly, we’re not all that sure. It’s too small to be an SUV, but too tall to be a normal hatch. The best way we can thing to describe it is as a Swift wearing platform shoes. Or, to turn that into a benefit rather than a fashion-based analogy, think of it as a more practical Swift. And that is a very good thing.

The Swift was and still is belting little car. Fun to through about, snappy gearbox, cheeky handling, a proper car to put a smile on your face. Now you’d think all that fun would be severely diluted given taller frame of the SX4, but it’s not. Thanks to non-too-narrow track, it’s a stable little thing. Also, the suspension is supple but not wallowy. As for the steering, it’s still crisp and direct. Add all that together and you’ve got a car that’s a right giggle to drive.

So why don’t I just buy a Swift?

Because the Swift, while fun, is small. If you’ve got a partner and some of those children things, you’re all going to get pretty sick of having to squeeze into a Swift. And you’ll never be able to do a ‘big shop’.

With the SX4, you’ll all be very happy. Its cabin is light and airy and there’s space for all the family. In fact, if you have three kids you’ll be okay. Also, if you ever have to put two adults in the back, you won’t need to call the fire brigade to get them out.

The fit and finish is quite nice, too. Okay, so it’s not particularly exciting – that’s where the Italians would have stepped in had they been given a remit greater than the engine bay – but it’s functional and reassuringly Japanese, meaning it’s hard-wearing and functional.

You’ll be pleased to hear that the SX4 came with some. You probably want to know what they were though, right? Okay, it was launched with a 107bhp petrol engine, which is adequate if a bit noisy. Suzuki binned it off in 2010 in favour of a more refined 118bhp 1.6, so that would be one to look for.

There were diesel engines, too. It was a 1.9DDiS from launch, which was replaced by a 2.0DDiS in 2009. There was also a 1.6 diesel from the off, but this was removed from the model range in 2009 too. The 2.0 is the one you want, if you must have a diesel. It has 133bhp and returns around 53mpg. Be warned though, while relatively reliable, none are refined. And non (we’re talking petrol and diesel here) are fast. You’re never getting to 60mph any quicker than 11 seconds.

Transmission wise, there was a four-speed automatic that was about as sharp as drunk gibbon, and a five-speed manual. Unless you’re missing a leg, go for the latter. The auto truly is awful.

Can I go off-road?

We’re not stopping you. If you want to drive into a field, have at it. The SX4 might slow you down though, because the all-wheel drive version hasn’t really dropped into our budget yet. It’s getting close though, with a handful of examples falling under three grand. But this site’s not called Not Three Grand, is it?

Anyway, you don’t need all-wheel drive. Buy an SX4, any SX4, and you’ll have bragging rights. You see, in 2008 Suzuki entered an SX4 into the World Rally Championship, which is pretty cool. Though that car had 320bhp. Yours, um, won’t.