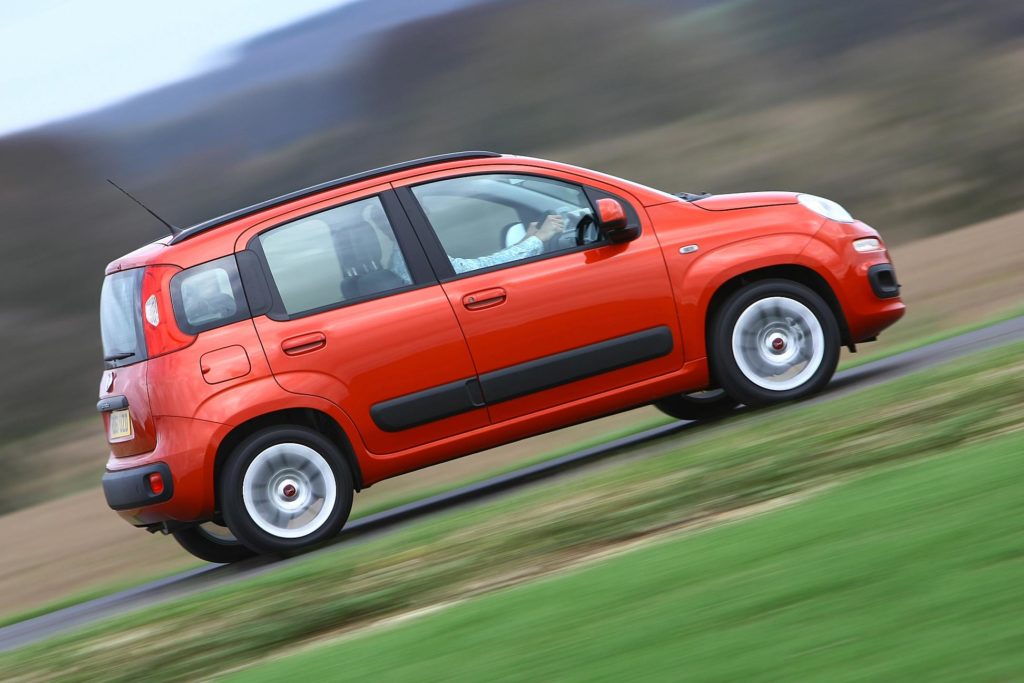 Let’s just come straight out with it. The Fiat Panda has always been brilliant. The low-resolution boxiness of the first Panda combined with its charming simplicity made it a winner. A car so full of charm and character, despite physically being full of nothing other than some seats and a steering wheel.

Then there was the second-generation Fiat Panda, which was a little less boxy but no less brilliant. The 4×4 version was like a chirpy, baby goat and the 100HP was the slice of hot hatch brilliance that nobody saw coming. Oh how we laughed at the idea, and then oh… how we hid in shame when we found out just how bloody good it was.

Then came the third-generation Fiat Panda, which is what we’re looking at here. Still as practical as ever, but with looks so adorable you’ll want to part exchange your puppy, the Panda has got no less brilliant with age. Is it fast? Nope. Does it corner well? Not really. It corners like chest of drawers. Is it cool? Hell no. But it is cute, charming, happy and fun? Yes, yes it is. And that’s something we need today. Desperately.

Introduced in 2012, the third-generation Panda is even cuter than its predecessors. Once again, it was built around the Fiat Mini platform, because doing so would ssve significant development costs and it was also a proven platform. The second-generation Panda was a cheeky little thing to drive, and customers liked that, so why change it? Instead, the 2012 model was an exercise in engine development and body styling, as both took massive leaps forward.

Styling wise, the third-generation Panda maintained the squat and tall dimensions of the previous car, but with more rounded edges. The old car was a lesson in straight edges with the occasional curve, which admittedly was a vast improvement over the first Panda’s boxy looks. The third Panda’s rounder edges and softer looks were more in keeping with the rest of the Fiat range of the time. Plus, they served to give the Panda a little more curb appeal.

Inside, everything was heavily re-vamped. The gear lever coming out of the dash remained, but everything else was changed. Better plastics, again, a greater willingness to use curvy design, better fabrics and more modern gauges and electronics served to make the little Panda feel more solid and grown up, but without taking away any of the charm or, more importantly, any of the practicality, which was a huge selling point for the Panda. Okay, so you’re not going to use it to transport a baby grand piano, but with the rear seats down, there is a lot of space – 870 litres, or 260 litres if you just slide the rear seats forward. Thanks to those aforementioned sliding rear seats, the Panda can happily seat four adults in comfort, though this will impact boot space.

And what of the engines? Well, the third-generation Panda had, globally speaking, lots. But we don’t care about most of them. What we got here in Blighty was a 0/9 TwinAir, a 1.2 8V Fire Evo II engine (fully integrated robotised engine – nothing to do with Sam or Pontypandy) or the 1.3 Multijet diesel.

The TwinAir is a, as the name hints, two-cylinder engine. It’s mega, and we can vouch for it having had a Panda TwinAir as a company car in a past life. It sounds like a box of angry wasps, but thanks to a turbocharger it delivers an impressive 85bhp. However, stats will boast of high MPG. This is not the case, because real-world driving is varied. It’ll average 40ish to the gallon. Though by thrashing the crap out of it, we did get that down to 13mpg. Fundamentally though, talk of this engine is moot, as you won’t get one for under two grand.

Nor will you get the 1.3 Multijet diesel, which is a shame, as it’s a belting little engine. It’s outstanding on fuel, it’s peppy, it doesn’t carry a lot of diesel clatter with it and it’s fiercely reliable. if you can stretch your budget to one of these, and you don’t mind hate mail from Greta because you bought a diesel, this is the engine.

What you will find within budget is the exciting-sounding 1.2 Fire Evo II engine. It is not exciting. It packs 68bhp, it has the normal (four) number of cylinders, there is no turbo, no supercharger and no Fireman Sam. It is, however, a reliable, economical, revvy little engine that will plod on forever if you look after it.

Five-speed manual transmission is the order of the day, which is operated via a lever protruding from the dash like a Civic Type R. So it has that going for it. If you want an auto, the TwinAir was offered with Dualogic automated manual.

On the road, the little Panda is an absolute riot. As James May once said, while driving a Fiat Panda in fact, it’s better to have a small amount of entirely accessible power than have an inordinate amount that you can only use a fraction of. The Panda panders firmly to the latter. Heh, some wordplay there.

It’s not fast, not by any stretch, but it’s incredibly fun. You can feel it move about on the tyres, you can feel as the weight shifts around, you soon develop an understand for how the little Fiat will behave when pushed, and while you’re giggling like a loon you’re only going to be going 35mph. It’s all the fun of a performance car with none of of the fear and risk of ending up in a ditch. Or a police cell. The Panda eggs you on, it’s like a bouncy terrier with a stick, it wants you to play with it, to have fun. Drive a Panda and we challenge you not to smile.

It is good on the motorway? Um, no, not really. It’s slab-sided and tall, so you get blown all over the shop. However, the engine is keen and as such, you can sit on the motorway if you like. A sixth cog would be nice, mind. It’s not the Panda’s natural habitat, that’s for sure. But it will adapt, should you ask it. It just won’t be at its best.

All sounds pretty good, doesn’t it? A cheeky, practical, frugal car that can fit four adults and that will make you smile on even the most mundane of errands. Brilliant. Buy one, right? Welllll, before you do, we need to address the big, crashy elephant in the room. Yes, we’re talking about EuroNCAP, and in the case of the little Panda, the news isn’t great.

In 2012 when the third-gen Panda came out, things were okay. EuroNCAP game the plucky little machine four out of five stars. Not exceptional, but by all means not a deathtrap. Then, when it reclassified and retested the Panda in 2018, the suits at EuroNCAP gave the Panda… no stars. Zip. Nada. Nuttin. Nowt. What the hell changed? Why is the Panda suddenly the wheeled embodiment of Jason Voorhees?

In terms of the construction of the Fiat, nothing changed. The car EuroNCAP spat at a wall in ’12 was the same car they crashed in ’18. Not the same car. You know what we mean. Anyway, what changed was EuroNCAP’s classification system, which means that because the Panda wasn’t laden active safety equipment, and because EuroNCAP changed its scoring a little, the Panda suffered. Nuts and bolts, steel and plastic, it’s still the same four star car, it’s not a wet paper bag. It just doesn’t have the most cutting edge safety tech as standard. However, it’s strong, it has airbags (no side ones though) and later cars had ESC as standard, while they all have ABS.

Should you buy one then?

Yes. Intrinsically, the car today is the same car as 2012. As we said, it’s not suddenly made of balsa wood and spit because EuroNCAP moved the goalposts. Physically, if you drive the Panda into a wall, it’s still a tough little car. A four star car. It’s not going to maim your children and set fire to your shoes. But also, it’s not going to subscribe to the modern vernacular of actively stopping you from crashing into said tree. Don’t drive like a dick, you’ll be fine.

The Punto suffered the same fate, and while the Punto isn’t quite as charming as the little Panda, it’s still a fundamentally decent car. EuroNCAP has done a lot for vehicle safety, but this reclassification thing is a huge step backwards. Really, in our eyes, there should be a score for the vehicle’s physical safety and that of the active and passive safety features.

The Panda is a fun little car and it is well worth considering. Don’t buy into the Daily Mail-esque reaction to the car’s reclassification (though kudos to Fiat, because this was kept a lot quieter than the Punto). Buy the Panda, drive like a normal person, not someone from Police. STOP! and you’ll be fine.