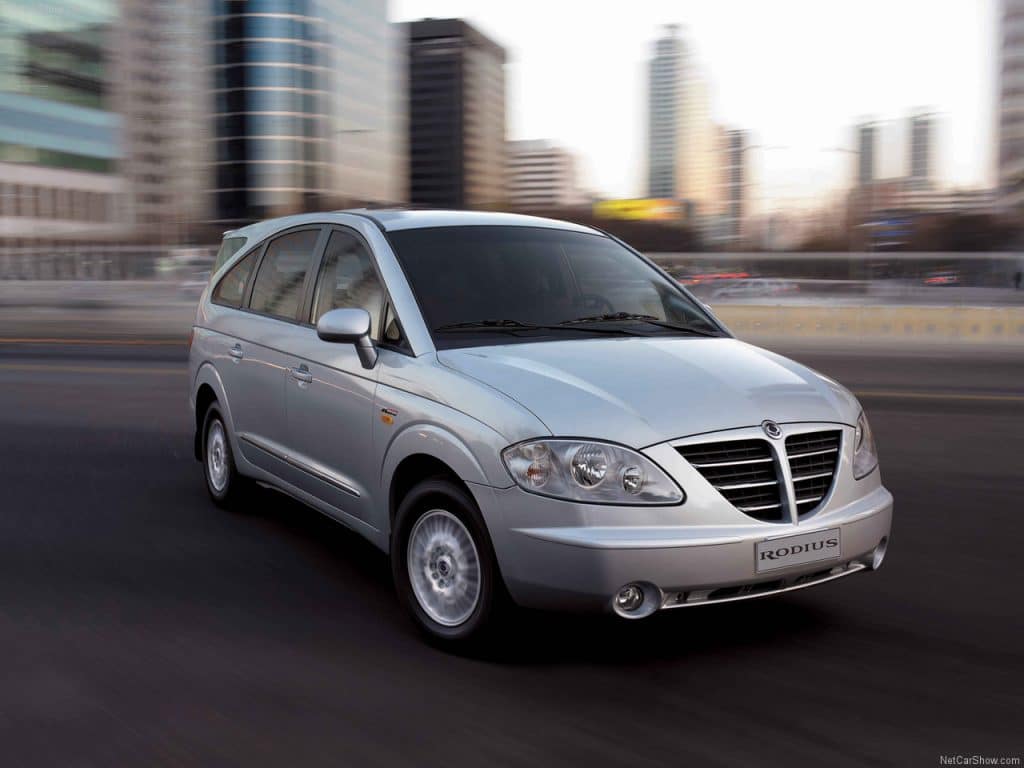 Do not adjust your sets. We’re really doing this. We must admit, the Rodius wasn’t a car that Pollitt wanted to put on the site, but the ever talented Mark Longland was keen, so we let him have a stab at it and wouldn’t you know it, he knocked it out of the park.

Bonkers. You must have been bonkers to buy a brand new Ssangyong Rodius. You would still need to be equally deprived of of your senses to consider one now. The ‘Yong carries with it numerous accolades and awards. Not ‘Car of the Year’. Not ‘Engine of the Year’. Nor the highly-coveted ‘Caravan Tow Car of the Year’. Instead it is renowned as being the Ugliest Car Ever. But in Not2Grand style, is there any merit, pleasure, or sense in taking ownership of the pig-ugly funbus?

The Ssangyong Rodius attracts much criticism of its aesthetics. Just a quick internet search of the vehicle yields numerous articles naming the car as being among the ugliest cars ever. This in itself is highly surprising when we explore the background to the Rodius. It was designed by Ken Greenley, who used to run the Transportation Design School at the Royal College of Art in London. The School has an alumnus who can lay claim to modern day Volvos, Aston Martins, and Jaguars. Greenley himself was joint stylist for the Aston Martin Virage of the late ‘80s; still a pretty car today, by my standards. So then, he knows his stuff.

Why, then, did the Rodius turn out like the awkward, quirky, heap it did? At its launch in 2004, Greenley explained the goal was to capture and instil the feeling of a luxury yacht in the Rodius. If George Bernard Shaw is to be believed, then all progress depends on the unreasonable man. Therefore we shouldn’t criticise Ssangyong or Greenley for daring to be bold and unreasonable in their approach – they have, at least, managed to stand out in a crowded market of MPVs that basically all look like posh Ford Transits with windows. However we can criticise the results.

Generic yet odd shaped headlamps. A V-shaped grille doing a very bad impression of an Alfa Romeo (very prominent on the ‘pre-facelift’ versions). Wheels which look miniscule in comparison to its girth. A tapering window line at the rear is supposed to fool you into believing this is a coupe. But this is immediately and completely undermined by the enormous glass box-section that juts out with set-square precision. Going off on a tangent, had it not been for that awkward rear section you could argue that the Rodius is a precursor to the BMW 3 and 5-Series ‘GT’ models. Google it and tell me I’m wrong. To continue the rant, the rear lights aren’t actually too bad; the shape of them could even help the Rodius pass for a posh Mercedes van/MPV from a distance. But there’s no consistency of the light shape across the entirety of the vehicle.

Overall the entire package of the car doesn’t seem joined up. It’s a mish-mash of design themes and it fails quite spectacularly at conveying a luxury yacht feel. Admittedly there was a ‘facelift’ in 2008, which helped ease the styling a little, but by that point Ssangyong was only rolling it in glitter. It pains me to think that a group of automotive professionals sat around a meeting table, discussed the final design of the Rodius at length, and still signed it off. It is a truly horrible thing to behold.

Often we can find that early, cheaper, Korean alternatives to the mainstream market can provide some simple motoring delights. If we set aside the visual shortcomings of the Rodius for a moment and look at the mechanicals, what is there on offer?

Firstly, the Rodius is well and truly in the MPV category – it is a beefy, colossal thing. 2 tonnes of metal, with 7 seats, and enough space to leave the caravan behind and just live in the thing itself. This can explain why most of the Rodii (plural, I think) in existence are found within a 10 mile radius of international airports – the rugged practicality of the thing is clearly valued by the likes of taxi drivers. They were also noticeably cheaper than the other MPV alternatives of the time. If I owned a minicab business, low cost, and maximal reliability and practicality would be at the top of my requirements list. Thrash the ‘bus until it splits in two, then thrash it some more.

It was powered by either a 2.7 litre 5-cylinder turbo diesel, or a 3.2 litre V6 petrol, both of which are Mercedes-Benz units. On reading this, I sat a bit more upright in my chair. A chunky, sturdy fun-bus with a beefy Merc engine? Hmm. However I quickly slunk back down again on reading the output figures. The oil-burner only musters up 165hp, whilst the V6 only eeks out 217hp. I don’t mean to sound like Chief Boyracer, but that is abysmal. These days, German Powerhouse manufacturers and the like can reliably get 300+bhp from a sewing machine. These numbers are before we consider in the sheer bulk of the thing. Manual and automatic ‘boxes were available, both of which were slated in the reviews. At this point I’m trying to make sense myself of which is worst – a slushmatic with little get up and go, or a manual which after much mad scrambling and stirring will eventually find a gear. Diminutive guts to back up the bulk – the drivetrain options really do put the ‘bus’ in the fun-bus moniker.

Unfortunately the workings don’t really get much better from here. Terrible ride and handling, poor emissions, dire interior quality, it goes on. The Rodius really is left wanting. Plus it looks terrible.

3 came in under the magic £2k barrier. All are 2.7 diesels, all either 2005 or 2006 models, 2 autos and 1 manual. The latter is immediately discounted on the fact of who really wants to heel-and-toe a Rodius. Slushmatic it is.

My pick is a silver ’05 Rodius with 114k miles and service history. At this point I am supposed to ridicule some more, however the thing actually looks surprisingly clean, dent- and rust-free, and like it was loved by all of its three previous owners. If that wasn’t necessarily the case, it has aged well and is testament to how sturdy they can be.

However the asking price is £1995. As near as dammit two thousand of my hard-earned. That’s the full budget gone. I was speechless that I couldn’t find one for much cheaper than that. Look at the other fine cars that Not2Grand flags, and suddenly the Rodius looks like a very, very expensive practical joke.

Had I found a working one for £500 (or less) then this would be a very different prospect. For example, buy it for £500 with some MOT, tax it, insure it, fill it with beer, food, and a BBQ, and drive to Scotland/Devon/Cornwall (delete as personal tastes dictate). Now that’s a very different prospect. A sturdy tour bus that you wouldn’t worry about, ferrying you around for £500 is worlds away from a £2k Rodius.

Purchasing a Rodius at the full budget cost makes absolutely no sense. Unless you had a fleet of minicabs, buying them in the first place never did. Even within the N2G realm it is still too expensive to justify anything that can come remotely near ‘cheap motoring’. The gopping, tawdry thing, despite its shortcomings, certainly has its time and place. But not unless you can find one for peanuts. Until then, it’s bonkers.