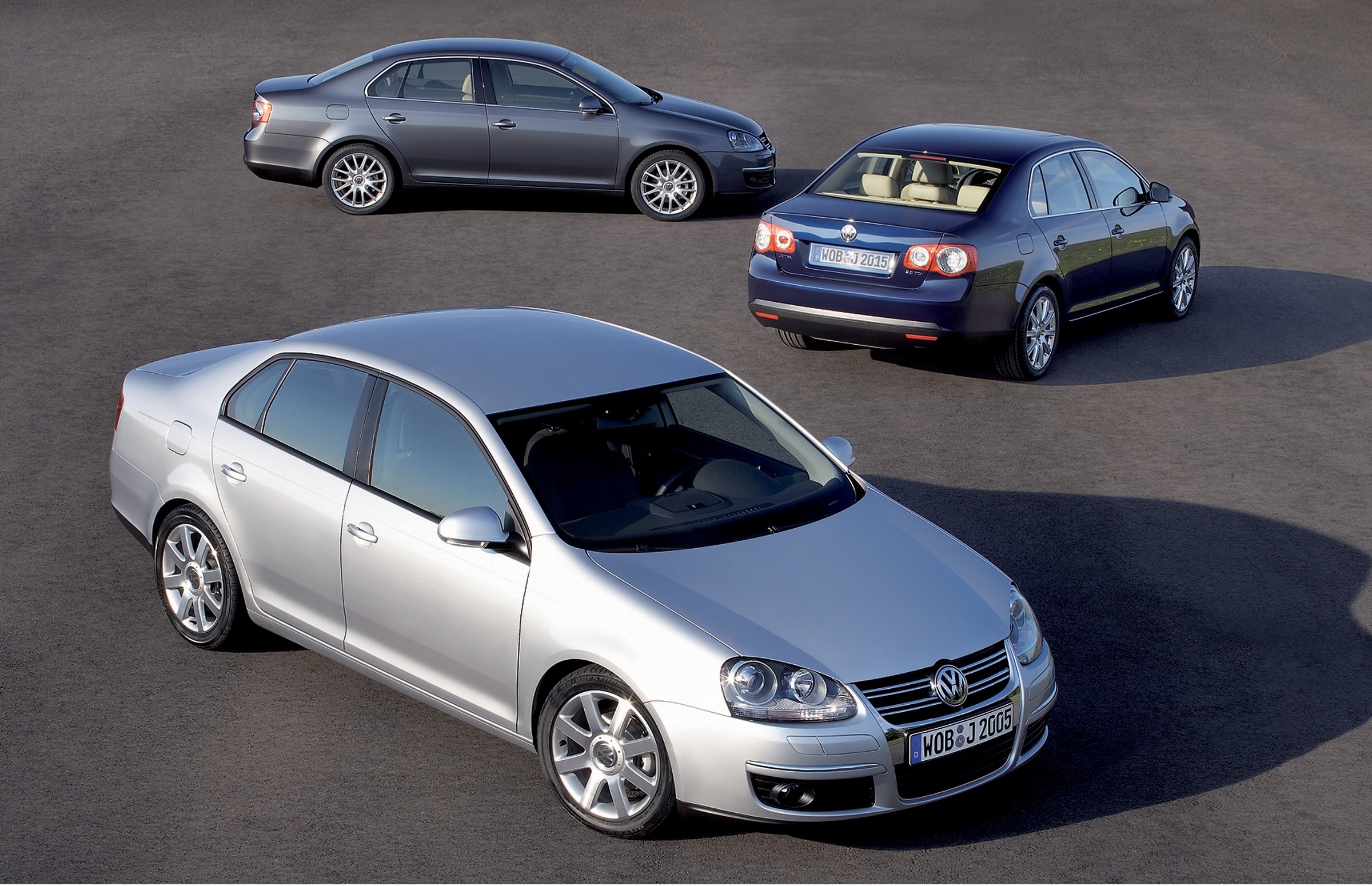 We’ve dabbled with Volkswagen before, years ago in fact, when we covered the Beetle. That was a long time ago, and now you can get a Volkswagen Beetle for about £15. So we need a new Volkswagen to wave our fistful of fivers over. And what could be better than a Jetta. Heh. That rhymed.

The British motoring public doesn’t really get the notion of a saloon car. Yeah, we have them, but they’re normally big executive machines, the boots of which are only ever full of documentation or the bodies of people who haven’t paid debts. For family duties, we tend to overlook the saloon in favour of the hatch. We do this because we might go to the tip once every three years. We buy hatchbacks out of fear for the unknown loads we might be required to carry. And that’s just bloody stupid.

We have had saloons over here. Before the hatchback revolution of the ’70s and ’80s the ‘three box’ saloon was a common sight. That’s still the case for many a carmaker, too. Saloons are big business around the globe, just not here. Did you know you can buy a Corsa saloon on the continent? How about a Clio saloon? They’re out there. But not here. We need the comforting thought of being able to put a fridge in the boot. Once. We’re weird people in the UK.

We had the Orion, the Megane, Mondeo, Vectra and Insignia available as saloons, but they’re rare beasts. The Jetta, however, is a law unto itself. It’s been here seemingly forever. It started life in 1979, went through two name changes (Vento and Bora) and then came full circle to be the Jetta again in 2006. We’ve always had it, and because it’s never been badged as a Golf, it’s always had its own identity. It’s a familiar friend these days, which is probably why Volkswagen still sells it. Don’t get us wrong, it is just a Golf with a boot. But that’s no bad thing.

The Jetta attracts a different demographic to than that of the Golf. People who buy Jettas are older, some might say wiser, and they’re almost certainly incapable of lifting a fridge into the boot. As such, they don’t need it to accommodate one. They like the understated appeal of a saloon. There’s something about the extended arse that makes the cars look bigger, and as such, more impressive than their be-hatched siblings.

Because of the people that buy the Jetta, the cars on the used market tend to be in better nick than their Golf counterparts. They also tend to be less full of child vomit and half-eaten McDonalds Happy Meals, which is also a bonus. Generally speaking, the Jettas have had an easy life. But, because of our British aversion to a boot, they cost no more – in fact often less – than a Golf. And that’s good for us. We like getting a lot of car for our money.

And don’t think that by buying one you’re going to have to tie your shopping to the roof. The boot is big. It’s 453 litres big. You can get an awful lot of stuff in there. Plus, if you fancy knocking up some shelves or building a rudimentary sex swing, the back seats fold down. So you can fit planks/leather/gimp suits with ease. It’s the OPENING that’s smaller on a saloon. Yeah, the boot looses some headroom, but it’s a bit longer as compensation. Plus, a boot is secure and hidden from prying eyes. You can leave all the laptops you like in there – nobody will know.

The Jetta is a good car. It’s built to Volkswagen’s exacting standards, which in the case of this generation meant 35% of the body was laser welded, over the 5% of previous cars. So torsionally it’s a far more rigid car. The steel itself is high strength too. And of course, this all means it’s as safe as houses. Yes, it’s got airbags both front and side, but it’s also physically tough. The Insurance Institute for Highway Safety said the Jetta’s side impact test was the best it had ever seen. While China NCAP (a market where saloons are big business) gave it five stars. It’s a tough little machine.

Then there’s the way the Jetta drives. It’s a solid performer. With independent suspension front and rear, it grips the road with a pleasant sure-footedness. It’s no Lotus Exige, but it does the job. And with a range of engines to suit almost any environment – from a 1.6 petrol to common rail diesels – there’s something for everyone. Also, you might find one with a 2.0T FSI engine. That’s 200bhp, just as you’d find in a Golf GTi of that era, but without the GTi insurance premiums.

Think about your car. Think about what you actually put in the boot. Do you need a hatchback? Probably not. So why spend your money on Golf filled with child snot when you can have a Jetta that, in all honesty, has probably had a much easier life? You know it makes sense.

Or of course, you could make into the modern interpretation of this movie famous Jetta. Then you could head to Race Wars and take on Johnny Tran in his Honda S2000. Or, you know, you could just enjoy your Jetta and not do any of those things. Street racing leads to Rio heists. And that’s naughty.