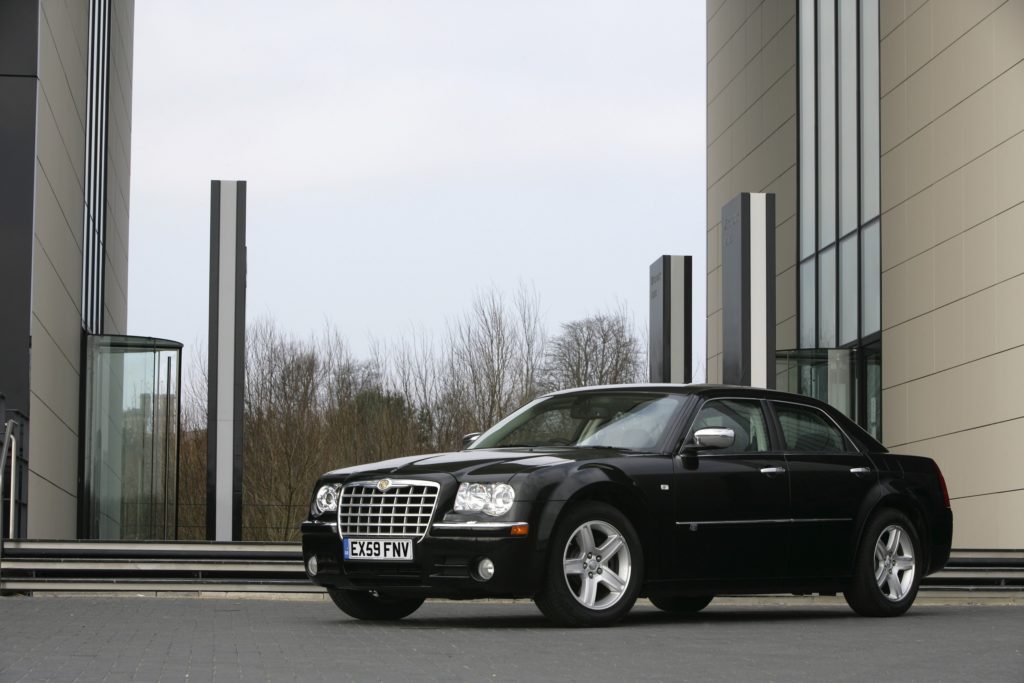 Dammit. We are so, so very conflicted. The Chrysler 300C has gingerly stepped up to the chilly pool of the sub £2,000 market and it is dipping a toe in. It’s not a car that floods the searches online when looking for a two-grand machine, but it is now one that comes up. And with that, we want to be happy. We want to run outside and shout about it. We want to encourage you to go out there and buy one but… we can’t. Why? Because the Chrysler 300C has largely been ruined by the people that buy it. And that association isn’t one we want. The Chrysler 300C was a wonderful novelty when it arrived in the UK in the mid 2000s. It was this big, brash, unfiltered, ten gallon, rear steak of a car and as timid Brits, we looked at it with wonderment. It was an American car, but it was for us. The steering wheel was on the right side and everything.

We won’t admit it over here, because as a general rule Americans are a bit silly. But deep down, we secretly envy them. Their space, their big buildings, their movies, their big food, their Guy Fieri. We love it all and we consume it via products or pop culture wherever we can. It’s why people called Darren buy knackered old Cadillacs and listen to Willie Nelson albums. They *think* that’s being American, even though it’s not. And for the most part, we know that. Which is why we don’t all drive knackered old Cadillacs. But if we could, man alive, we would.

When the 300C appeared in Chrysler’s UK dealerships we were gobsmacked, and we were excited. This big old car, this car we knew would be absolutely useless, we wanted it. We wanted it because it legitimised our obsession with America. We could go out and buy this thing and secretly pretend we were Americans, but without the cliches. We didn’t need the ‘BUD LIGHT’ neon sign to fizz and flicker above our ’50s retro-look fridge. We could buy and listen to Radio 2, not Garth Brooks. We could buy it without needing to do to the local Harvester on the first Thursday of every month to meet with other dweebs. We could just buy it and enjoy it.

Chrysler made matters worse by having the affront to make it actually half-decent. Okay, it wasn’t nor ever will be a rival for the E60 BMW or the E Class Benz, but then it wasn’t as expensive. In fact, it was damn good value when compared to the typical Germans. It was well equipped with electric everything, power this and automatic that. It was bloody handsome, in an ugly kind of way. It was remarkably spacious inside and it was incredibly comfy to boot. It was a good car. From Chrysler. The same people that spat the Crossfire unto the world. Mad.

On the road, we were expecting the Chrysler 300C to have all the poise and stability of your Nan after she drank too much brandy at your Sister’s wedding. That wasn’t the case though. The 300C was and still is a car with decent handling. It’s not exactly sharp, but it is comfortable and composed, and while the steering lacks any real feedback, it is direct and responsive. The 300C doesn’t wallow like a fat kid rushing to get a discount McFlurry, it doen’t leave the driver in the dark nor does it put them to sleep. It’s no Lotus Elise, but it’s not a bad old thing to be at the helm of. And because it handles reasonably well, you quickly build a level of trust with it, and that’s nice.

In case you’re wondering, people get excited about the Hemi because it has a hemispherical combustion chamber, which because of science, is good. Greater potential for the area taken by valves or something. You can have the valve diameter exceed the bore size, apparently. More fuel, more bang, more power in a nutshell due to the valves having more room to play.

Thankfully, Chrysler realised that fuel in the UK requires a mortgage, so gave us a 3.0 V6 diesel pulled from the Mercedes-Benz parts bin. This is what your two grand will get you. With 215bhp it was, ahem, gently-paced at best. But it did return a slightly less eye-watering 36mpg if driven sensibly.

And because Americans get a headache when they see a manual transmission, the 300C didn’t have one. Five-speed auto for the lot.

The sensible buyers decided to try and go down the safety route to get them off their silly 300C fixation. We’re talking about an American car, so it would be about as safe as transporting eggs in a biscuit tin, right, RIGHT? Well, while EuroNCAP has never shot one at a wall, the American equivalent has. And as it turns out, the 300C is mad out of girders and bricks – it’s as safe as houses. It came with airbags (front and side), ESP, ABS and traction control as standard.

Then Chrysler went and did the unthinkable. For everyone who had resisted the urge to buy one by telling themselves the 300C wasn’t very practical, Chrysler went and made an estate. And good lord, it was and still is a handsome machine. Long, low, menacing and annoyingly useful to boot (no pun intended). Well played, Chrysler. Well sodding played.

And so the 300C meandered on. Okay, the build quality was a bit off and interior was about as exciting as a junior school Christmas play (why is our kid always cast as a tree?) but it didn’t matter. It was a big, silly dog of a car, and it was American. But in a cool way, not in a ‘look at this MP3 jukebox I bought of Amazon’ way. And that was the status quo for a long, long time. Until they got cheap. Their cheapness brought with it a return to American from, and that’s why we’re so conflicted.

Now the Chrysler 300C is cheap, it’s fallen into the crosshairs of cliche. It’s now not special, it;s not exclusive, it’s not a car bought after careful consideration and for its surprising amount of positive merits. It’s not a car that you can defend of its Americanness because it’s good. It’s now just a cheap, slightly weird American car.

The kind of person who bought the 300C new doesn’t own a country and western CD, nor have they ever been to a Facebook Group car club meet at that local Harvester. The buyer of a new 300C did so knowing that their car would raise an inquisitive eyebrow, but that’s all. It wouldn’t stereotype them. Now, however, in the realms of the cheap, it does.

Now the 300C is the reserve of the council estate self proclaimed ‘hard man’. It belongs to the lad down the builder’s merchant that can’t spell his own name. It’s bought by people that tint the wheels, fit those frankly awful Bentley grilles and deep dish 20inch alloys off eBay. It’s bought by people that do have country and western CDs, because they need people to know they love America. And that’s a shame.

Buy one, and you’re going to be lumped into that group. But you know what, do it. Buy one, keep it standard, resist the urge to hang a confederate flag air freshener from the rear view and enjoy it. The 300C should be pulled away from that stereotype. It should be appreciated and enjoyed. It’s a bit of fun, an exciting face in an otherwise bland sea of cars. It’s different. It’s got nothing to do with it being American. Ignore that bit. Buy one because you like it, not because you like Bruce Springsteen.