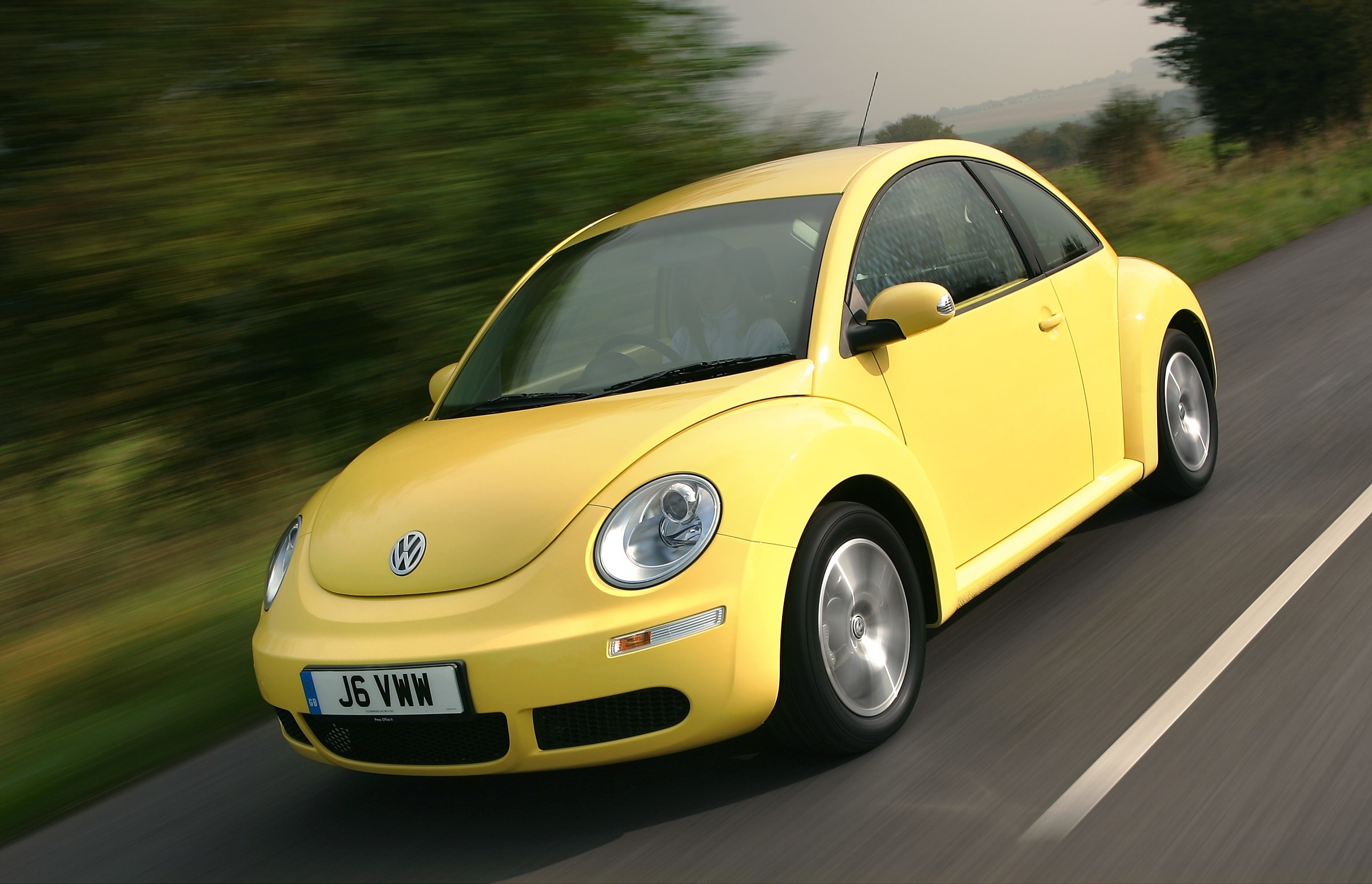 No, not this cheeky chappy and his chums…

…we’re talking about this newer and considerably fatter fella…

…not that there is anything wrong with being fat. We’re not fattist or anything; we’re quite fat ourselves actually. Urm, anyway, moving on.

So, yes, the New Beetle. First seen in 1994 as a concept car, it was penned by J Mays and Freeman Thomas who spend their days being payed wheelbarrows full of cash to draw cars for VW executives, the lucky swines. Unveiled at the North American International Auto show, the car carried the name ‘Concept One’ which must have taken Mays and Freeman almost 6 seconds to come up with. They got away with the rubbish name though, thanks to a warm reception from the motoring press. Soon though, the public outcry grew to such a level that a road car had to built.

The borrowed Polo underpinnings of the concept were binned in favour of Golf IV gubbins, while the overall aesthetic was tidied up. In 1998 the New Beetle (again, an imaginative title) was born.

A doodle of a concept car. Doodly.

Once the Beetle was released its popularity was astounding. It hit the U.S first, predominantly being bought by rich fathers for their young college-going daughters, according to American TV shows and “Ten Things I Hate About You” at least. They were also bought by folk who take a great pleasure in boring people to death by telling them that they were, back in the day, hippies of some kind. All the while ignoring the fact the hippy stereotype is still firmly associated with the original, air-cooled Beetle. They failed to see that in a new Beetle they were only embodying reliability, economy, safety and German sensibility. Free love, Hendrix and peace are not the first things to spring to mind when viewing a New Beetle, even if the driver has a daisy on the dashboard and a tie-dye shirt on his or her back.

Those stereotypes soon thinned out though, leaving the New Beetle get on with being what it was designed to be: a cool, quirky, but usable and reliable car. It was a Golf IV under the skin after all, essentially making it nothing more than a Golf in a party frock. That’s no bad thing though, the Golf IV was (and still is) a good car. Engine-wise you could have a New Beetle with a 1.6 or 2.0 petrol engine at first, with a diesel option available later. The latter is the one to have if you can find one, because economy is good. Later ‘face-lift’ version also had a 1.4 petrol, which is fine if you never plan on being in a rush.

They even did V5 and turbocharged versions too, if you want a bit more pace. Inside it was the usual case of great VW build quality along with space and comfort; there was even a silly little vase on the dash to put a flower in, or just a Biro if you had any common sense. It was great on the road too but with a Golf IV floor-pan it was never going to be a bad drive.

So, there you have it, the history of the New Beetle. So, why should you buy one? Personally, we’d have to go with the following reasons:

*they look a bit odd
*they’re cheap
*girls like them
*you can make them go quite fast by using Golf bits
*when people ask what you drive you can just say “The Bug”
*like a Jack Russell puppy, they always look pleased to see you
*the engine is in the right place, not the boot

Solid reasons we’re sure you’ll agree. We’ve saved the best for last though! If you buy a New Beetle you can turn it into a modern day Herbie! No, really, stay with us on this one.

…but don’t, because it looks silly. Instead, paint a ’53’ on the side, a red and blue stripe over the roof and then let it do this:

We say “let it” because everyone knows Herbie did the best stuff on his own (he was a boy, right?) and as such, we promise* you’ll get away with it. After all, no one likes caravans, but everyone loves the smiley face of a cheeky ‘Bug’ with a number on its nose. You’ll be able to leap through caravans across the land, each time being welcomed by a crescendo of cheers, whistles and applause. Then, you can drive home like this:

*you won’t get away with it. Driving through caravans, while enjoyable, is very noisy. Also, when the police come a’knockin on your door we’re pretty sure that the excuse of “Herbie did it” will get you sectioned under the Mental Health Act. Cars don’t drive themselves, well, maybe Brum, but he’s different.