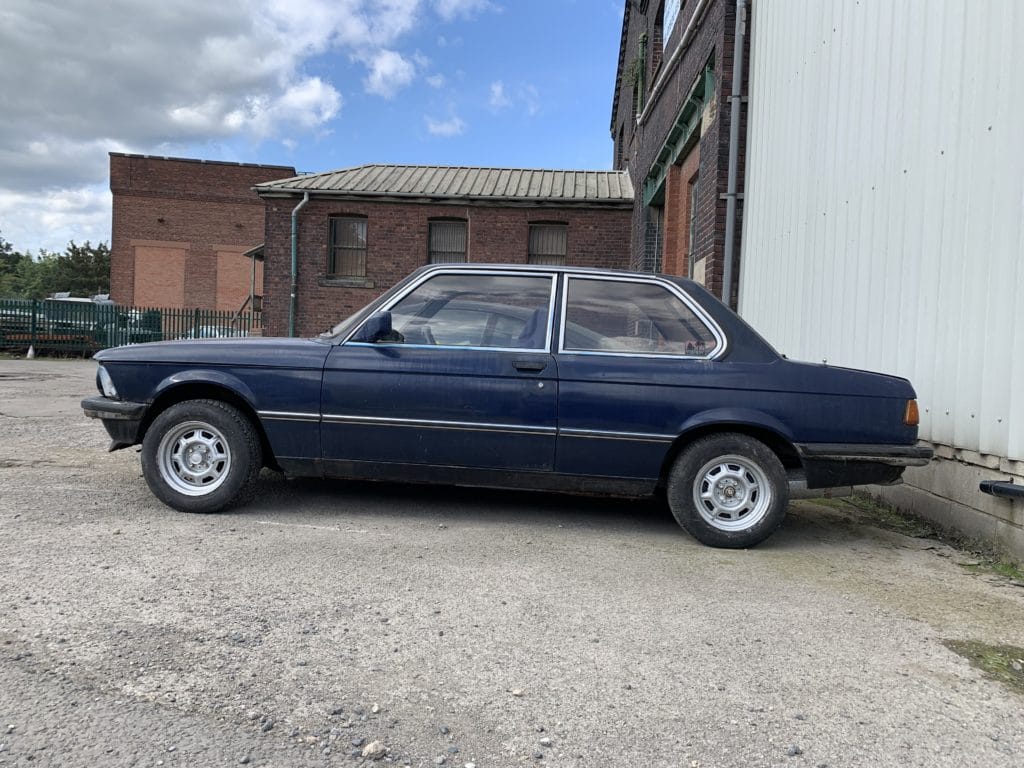 N2G Tech guy Michael Mason wasn’t looking for a project, but bought one anyway because, you know, old BMWs.

I may have just accidentally bought the cheapest running BMW E21 in the country. I say accidentally because I wasn’t looking for a project, and a misunderstanding between friends over Whatsapp made me buy it.

The BMW appeared on my Facebook feed when I got home one evening. It was local and very cheap at £1000. I wasn’t looking for a project, but I love a shark nose BMW, so I went to have a look at it.

The drivers door wouldn’t close, the rear panel was rotten, the sills were patched, the chrome bumpers were holed, the Lapisblau paint had been rattle canned over, the interior looked to have been though a shredder, the blue carpet was faded to a sandy colour, the dashboard was cracked and there was a huge hole in the drivers floor where the previous owner had cut out the rot and then forgotten he didn’t have a welder. It was also a poverty spec 316. Note the lack of the ‘i’. Yes, this has the BMW M10 1800 non-injection engine. This means no rear discs and smaller front struts and brakes. On the plus side, the arches didn’t have any rot, and it started first turn of the key.

I was thoroughly underwhelmed and walked away not that interested, because, as I might have already mentioned, I wasn’t looking for a project.

I am one member of the Crap Car Collective (The CCC), who own the N2G Racestro. We are a group of three who have a collective workshop and a few crap project cars. For some reason, during the Whatsapp chat, the other members misunderstood my ‘not interested’ stance as ‘I want it but you’ll take the piss out of me because it’s so bad so I’m going to say I don’t want it’. Si said buy it, and then we will decide what to do after we get it. So that’s what I did. I rang the seller and offered £750 which was accepted without hesitation.

Old BMWs can get under your skin. They seductively wink at you, and whisper things like ‘Look at my sexy little kidney grills’, ‘I could look like this Alpina’ and ‘OMG I want your hot M42B18 inside me!’. Well, this one did.

Over the next few days I looked into spares availability, and thought about it. I was feeling a bit down about the whole “don’t buy it/buy it” thing, so I had a conversation with Si (who used to work in a BMW bodyshop back in the early 90s) and he said it wasn’t that bad, and if I wanted to keep it, he would help with it. I wasn’t looking for a project, but I was on the verge of having one.

I casually mentioned it to Lauren, my E36 owning parter, who loves old BMWs. Her response was ‘No projects. You’ve got enough’. I was disappointed. I am in possession of an old BMW but may have to sell it anyway.

A couple of days later the CCC went on a road trip to collect Si’s new car. A low mileage Rover 214 Convertible. During this trip, Matt asked when I was putting the E21 up for sale. From my response of ‘Er…..’ he knew I wanted to keep it.

‘Did you know about this?’ he demanded of Simon.
‘Keep me out of it!’ Si protested, looking all innocent.

The next 20 minutes was a blur, as we all argued, but it ended with me shaking Matts hand after I sold him my Ford Anglia project. This hadn’t been touched in a few years and I felt it was a good price. My number of projects remained the same, and now I can fund the BMW rebuild!

Lauren was at work when I arrived home. I was a bit worried because she had told me some months before that I wasn’t to sell the Anglia, as she really liked it. I started watching E21 YouTube videos on the TV. When she got home she saw the TV and said ‘Mmm, that’s nice’. Now’s my chance. I told her I’d sold an Anglia (I had three) and was keeping the E21. Surpringly, she was ok with that.

Projects tend to grind to a halt due to lack of money, time or both. I made of list of what was needed, knowing I now had the cash to get a lot of what was needed. Front wings, sills, rear panel, brakes, bushes and suspension were top of the list. Most parts seem readily available, but genuine panels are getting harder to find.

A pair of sills (£69) and a pair of front wings (£40 each) were found on ebay, however the car desparately needed a rear panel. I’d found a US spec one on an American dealers online. It would require a bit of modification for the Euro market. Luckily, a couple of days later, two NOS Euro spec BMW panels appeared on ebay in Greece. I hit the buy it now button and my budget was £400 lighter.

All the brake components have now been bought, including a complete Automec brake pipe kit which was won on ebay for a bargain £22. This was particularly sweet after the seller turned down an offer of £30. Powerflex bushes will replace the original saggy rubber ones.

I have found three places where I can get a complete new interior. Australia, America and Germany. Prices are similar, but there’s shipping and import duty to consider. I may have to buy from Germany before Brexit happens.

Work hasn’t started on her yet as the CCC workshop is being renovated. I have decided I want to do a Restomod with her. I like the idea of using a 318is engine from an E30 or E36 rather than sticking in the biggest engine I can find. This is still a four pot 1800cc, but with twin cams and produces around 40bhp more than the current M10 engine.

Updates will appear on N2G and maybe on YouTube.