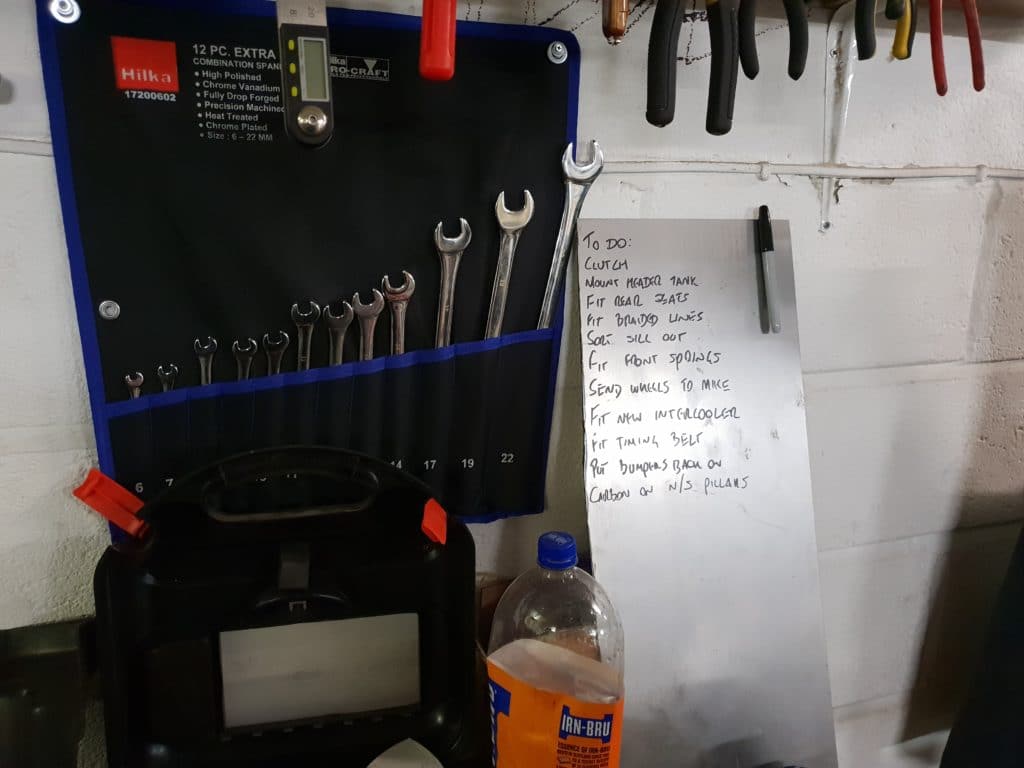 Progress has been… slow. There are a number of reasons for this. First of all, there’s the obvious – Christmas and New Year got in the way. Then there’s the less obvious – I spent Christmas in intensive care. 1/10, do not recommend. Then there’s the reason I’d like to ignore, but I can’t – I simply couldn’t be arsed. But please don’t misconstrue, I still love the big old bastard. It’s just that, well, it’s been a bit of a dick of late, fighting me at any given opportunity. I should have expected it from an old Rover though, so I’ve only myself to blame.

As things stand, the car currently sits like this down at the N2G Technical Centre…

How very… derelict. But while more bits may have come off it that gone back on, I can assure you that progress is being made. For starters, the reason it’s up in the air is because the wheels have gone off to Midland Performance to be dipped, stripped and refurbished. So when they come back, they’ll look factory-fresh and as such, they’ll be deserving of the new Falken rubber that I’ve had sitting around for what feels like a lifetime now.

Also, while it’s doing its best ‘scared of a spider’ impression I’ve tackled all the suspension. Well, I say tackled. What I’ve done is take it all off. The new lower springs have gone in the back though, so that’s something. I’m not being lazy though. I don’t need the car to be on the road right now, so I decided to get all new shocks for it. I’m just waiting for those to arrive, then they can all go on the car. But not before I’ve changed all the bushes for Powerflex Black Series and cleaned up and painted what I can. Got to make it look nice.

What else have I been doing? Um, oh yeah, I sorted the front bumper out. The keen-eyed amongst you might have noticed it had a whopping great hole in it where the previous, ancient owner drove it into something. This needed to be sorted, as it let the whole front of the car down. Having never done bodywork before, it was a bit of a big ask, but learn by doing as they say.

I bought a bumper repair kit off the might eBay, which included some mesh, some plastic (thus flexible) filler and some other gubbins. I chose to ignore the instructions, and instead fibreglassed the mesh onto the back of the hole in the bumper, so as to give the filler something to latch on to. Then applied the filler, sand, prime, job done. I’m happy with the result, though the colour is a million miles of stock. I think the factory paint is a bit sun-bleached. No bother though, it’ll get paint at a later date. Plus, it’s better than the bloody great hole.

Oh, I also meshed the front lower grille and fitted the new LED fog-lights. Not bad for fifteen quid off eBay, and minimal trimming of the bumper to fit.

The pillar were looking a bit battered and scratched, so I repainted them. However, I wasn’t happy with the finish. That’s when I remembered I had some decent-quality carbon-u-like vinyl kicking about, so I used that. It’s got a textured finish and it made of really durable, decent grade stuff. It’s not to everyone’s taste, but their name isn’t on the V5, so ner. I like it. It gives the car a bit of detail, too.

I think I’m going to do all the interior in the same stuff, too. Used ti to cover up all the wood. Again, not to everyone’s taste, but whatever, my ride, my choice.

Oh yeah, and I replaced all the bumper hangers, too. A guy called Ade makes them and sells them for £7.99 a pair on eBay. They’re the perfect part for any 800 and fit with ease. The only fight I has was getting the old ones off, as the torx-head screws had all corroded. Much like the original hangers, which rust and splay over time, meaning the bumpers start to sag. This is a cheap and easy fix. Also, the same guy makes a totally new filler neck system for the 800. Hands, as mine is corroded to hell. At £170, it’s not cheap, but it’s not like A) I can go to a Rover dealership or B) I am willing to scrimp on something so safety-related.

The other big job I set myself was sorting the brakes out, and that’s where things went wrong. I have a full set of brakes from M Tec, including braided lines. I thought putting the lines on would be a doddle, but alas, the originals had other ideas. One line/union broke, while two more refuse to come undone no matter what I try. As it stands, only the nearside front brake line is braided. The rest are fighting. I’ve had to draft in the help of someone else to try and tackle them, because my patience has simply run out.

Still, we’re getting there, slowly. At least that’s what I tell myself.

Until the next update, here’s a little video I did for our sponsor, Adrian Flux, on why I and we as N2G love the Rover 800.