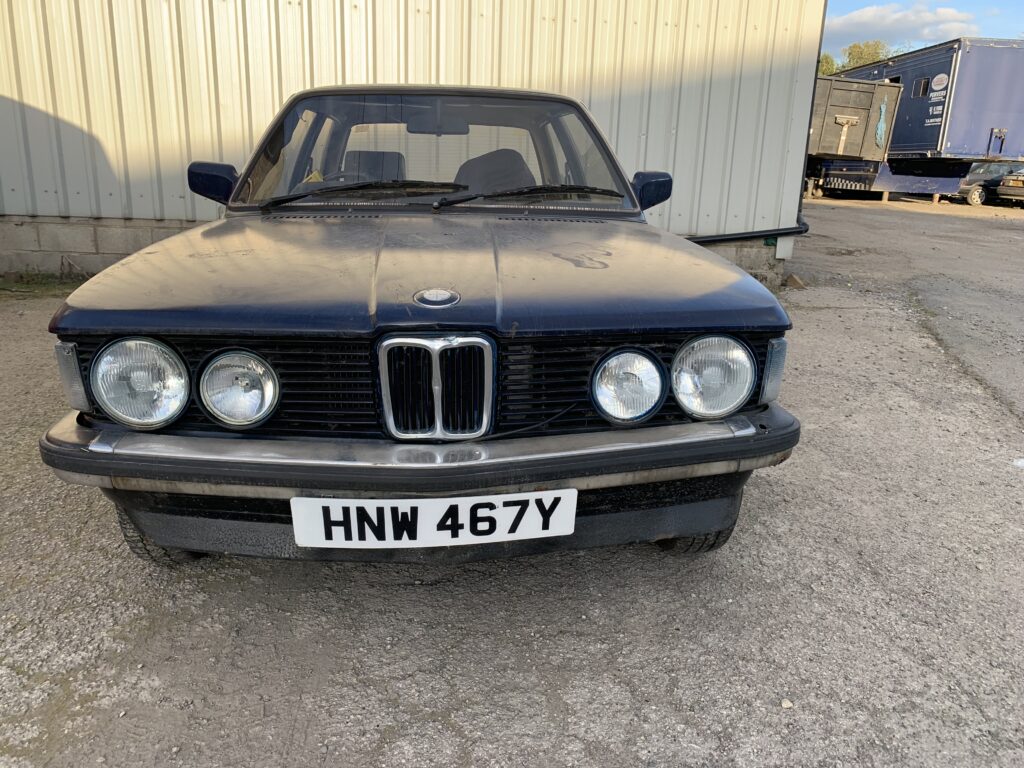 When we last left Betsy, my cheap, battered E21, lockdown had just been lifted and we were able to get back into the unit and continue the work. After discussing the welding work with body guy Si, we decided we should strip her and flip her onto her side so we can access her undercarriage. Yes, I really did just say that. Ahem. Over the next few weeks, I undertook the job of removing everything from the shell, taking photos, bagging and tagging it all. A very tedious task which delighted my OCD, BMW-loving wife. 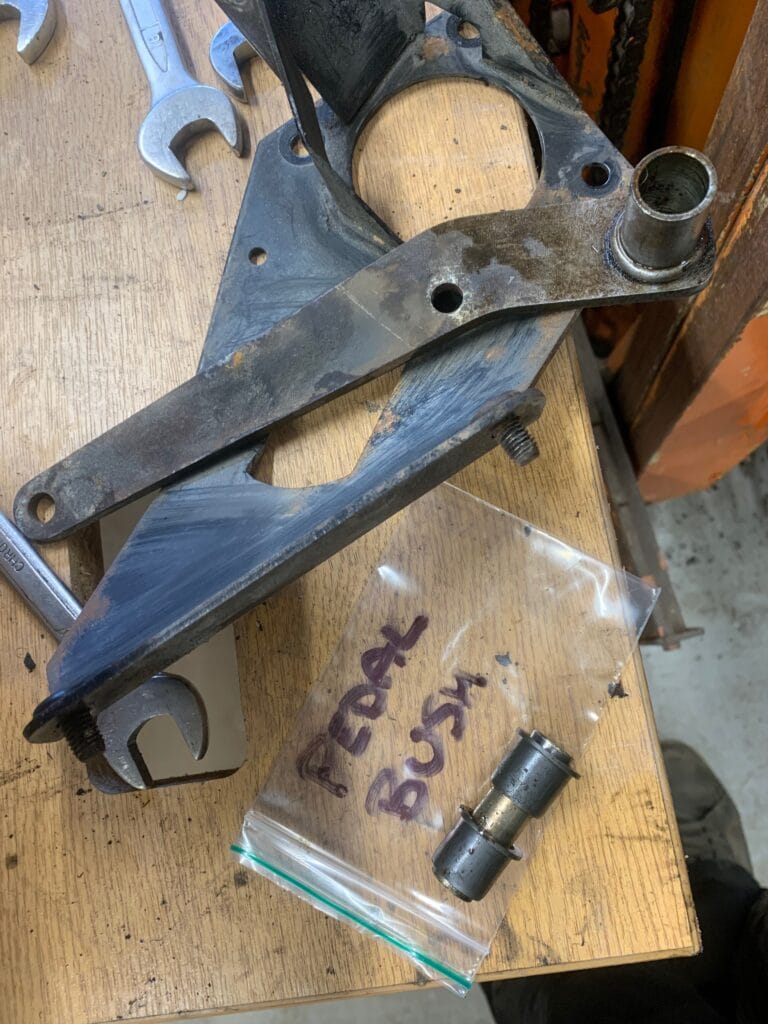 All the glass came out, along with what was left of the interior. The front wings, bonnet and boot came off with ease. Then it was time to tackle the doors – both of which drop upon opening.

Unfortunately, whilst doing this, we had a closer look at the A posts, and spotted the reason for the door dropping. On one side, the hinge was broken and the A post was rotten. On the other side, there was rot and a worn hinge. They could be patched up, but it was not going to be a straight-forward repair. Using RealOEM.com, I found the part numbers for the A posts, and started Googling to see if they were still available. Amazingly, a pair turned up. One in Germany and one in East Anglia (from Jaymic the Classic BMW specialists). I couldn’t buy them quickly enough. TAKE MY MONEY. 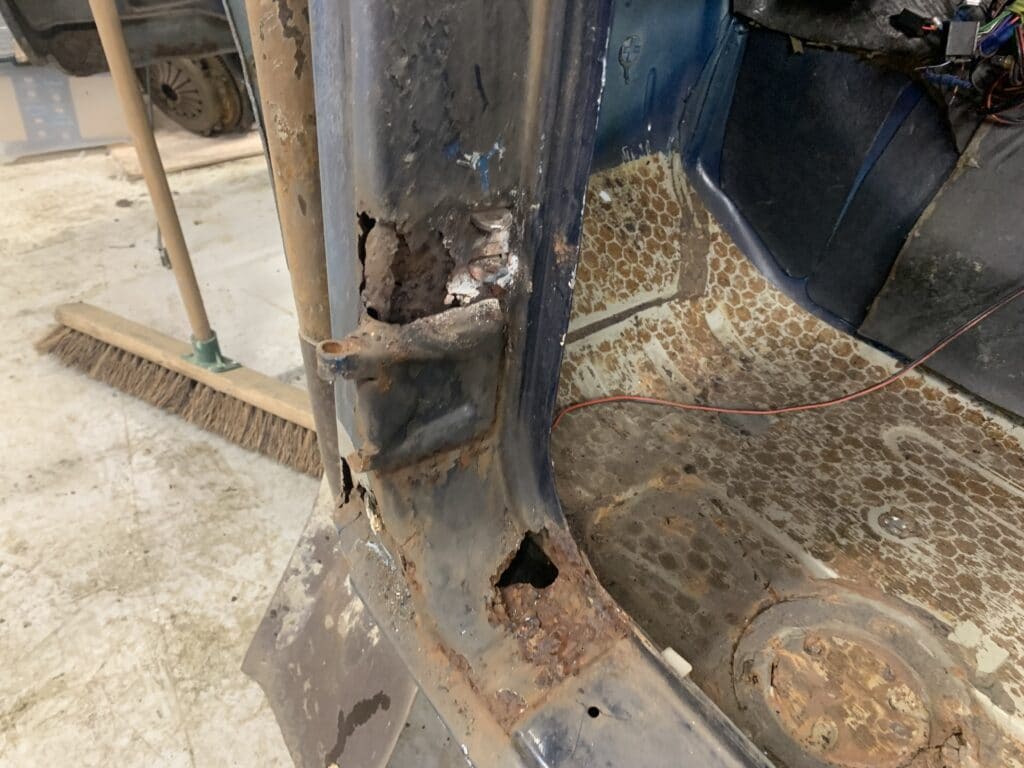 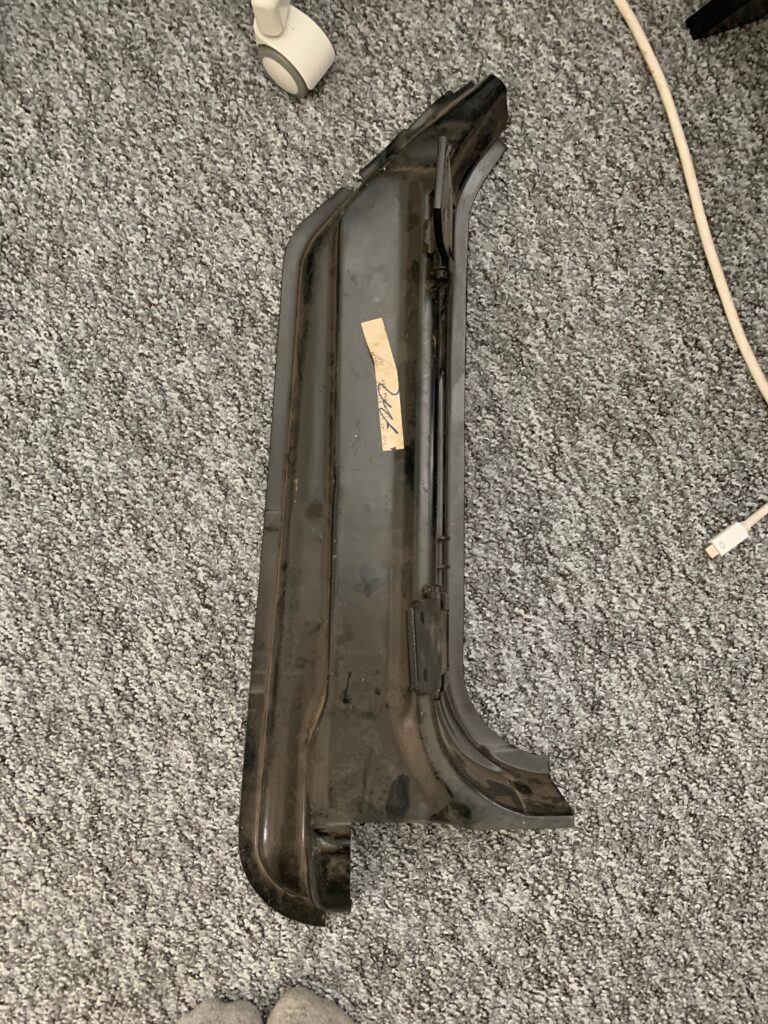 Next, it was the turn of the engine and box. They came out along with about three inches of engine oil and muck that was stuck to ev-er-y-thing. The front suspension was removed, along with the steering and crossmember. Many photos were taken along the way, but as ever, I probably didn’t take enough reference ones. “Just how does that pipe go from there to there?”. I’m not sure. Ah yes, use the workshop manual. No, not the Haynes. The actual BMW E21 manual that I have a PDF of. Oh wait. That’s just for the six cylinder… I’ll know to take all the photos next time.

All the brake lines were next, with the servo and pedal box. Everything was either rusty, dirty or rusty AND dirty. But I had some plans for them. The pedals, pedal box, servo support, crossmember and a few other bits and pieces were dropped off at Midas Touch in Pontefract for powder coating. And what an excellent job they did too. 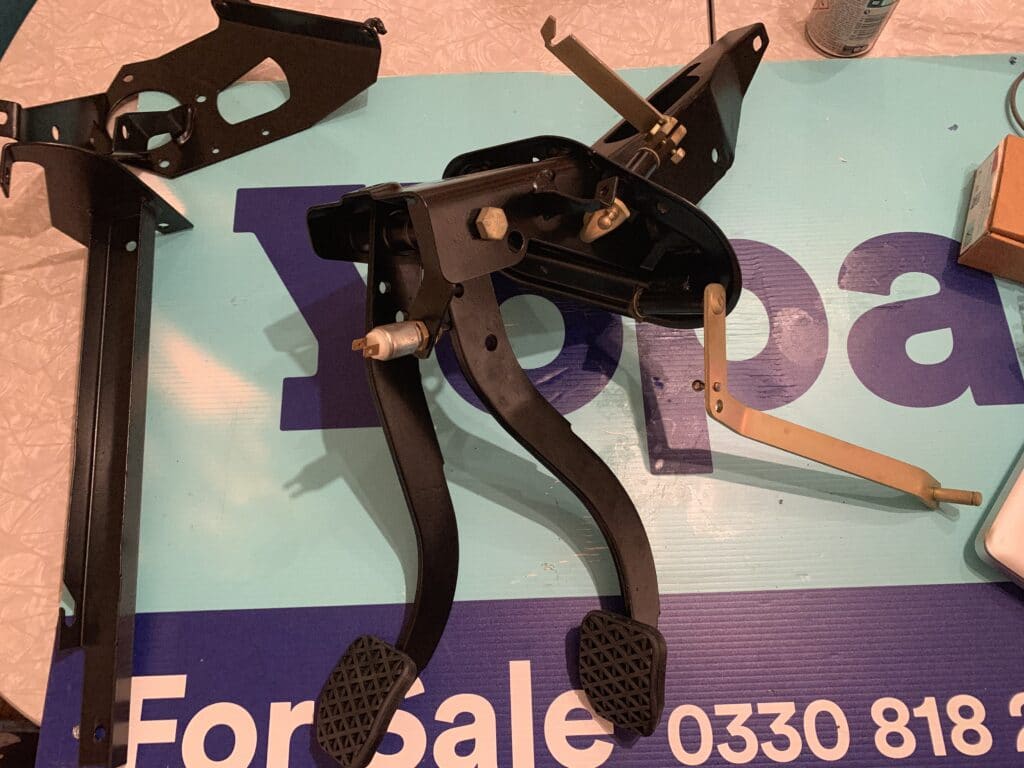 E21 dashboards are known to crack badly, and mine is no exception. Mint ones sell for £600+. I found one that was only slightly cracked, for £50 so I bought it. However, the way this car is turning out, I may have to dig a bit deeper. I have been told about a local dash repair company so I might have to look them up and see if they can do anything for me. Alternatively, there are some companies that sell dash covers for the E21 which may be an option.

Anyway, mine has been removed along with its loom. And that’s that. We now have a bare shell. 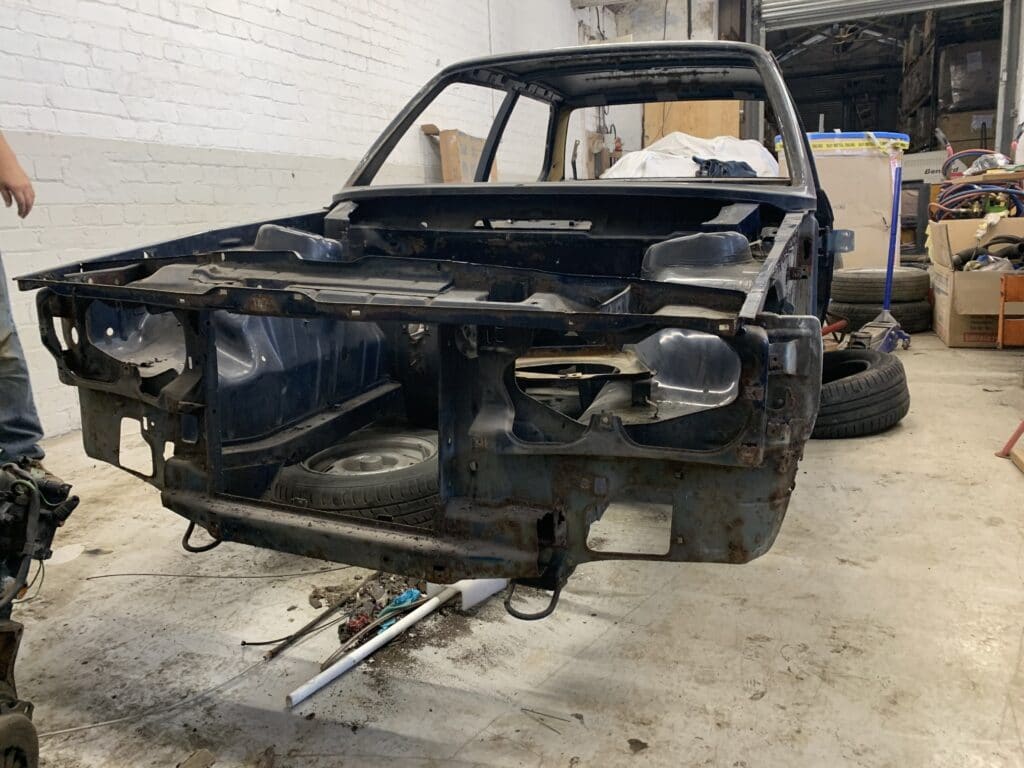 With Betsy on her side, we were a lot happier. I may have mentioned that I am not doing the welding. My mate Si used to work in the bodyshop of a local BMW dealers in the early 90s, and has restored many E21s, so all the body work is down to him. We started from the rear, and are kind of going about her in a clockwise direction.

The first task was to clean up any areas where the factory protection was cracked. I bought a finger sander just for this job. It’s great for getting into awkward-to-reach areas and corners, that round angle grinders with wire brush attachments can’t reach. I cleaned quite a few areas back to bare metal, removing the rust, before protecting everything with rust inhibitors and red lead. Other areas were scuffed back so more protection could be applied and painted. But before that, I will be applying seam sealer everywhere.

Si got to work cleaning up the repairs to the boot floor, and also removed the towing eye. This was damaged, along with the boot floor/spare wheel well. We don’t know what happened to it, but it may have reversed into a low wall at speed. On BMWs floorpans, there are four large access holes with covering plates. These are used on the production line, and are sealed up when the car is finished. Unfortunately, they are known to rot. I ordered four new plates from Walloth Und Nesch and Si did a cracking job repairing the rear ones. The front floors will be replaced by panels from Valcas Garage in Germany, but fitting the plates to those will be easier. Si also repaired the inner sills at the rear now it is more accessible. 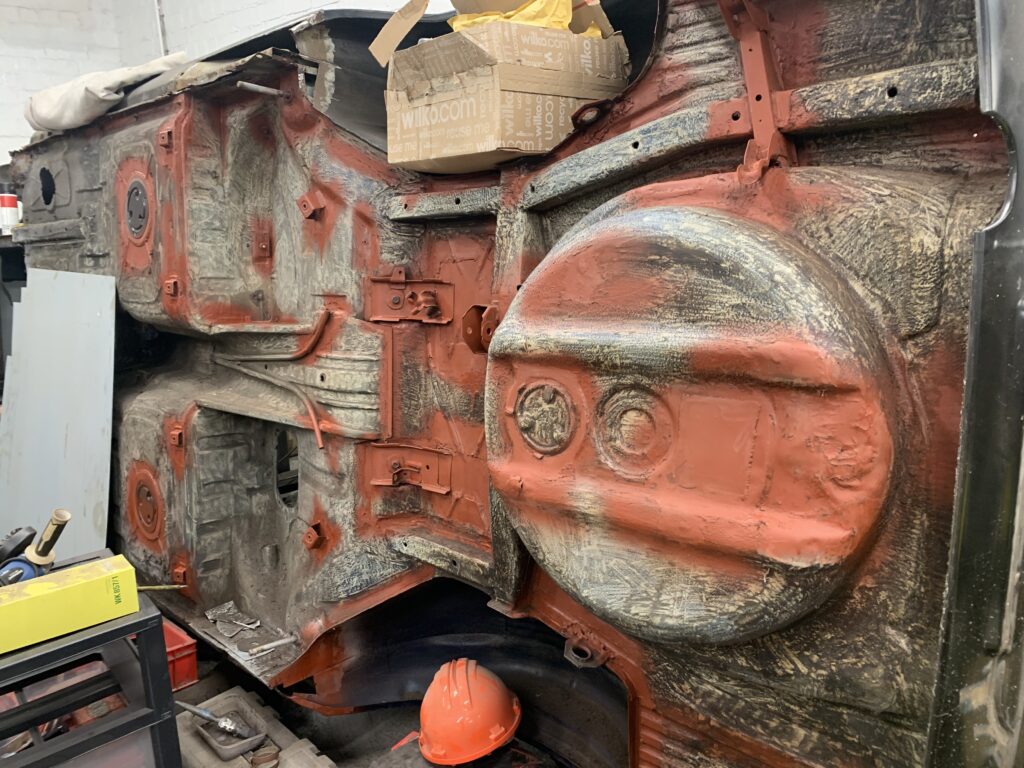 The front chassis legs under the floors on Betsy are dented to hell. We originally wanted to replace them, because there is a bit of rot at the front. However, they are currently unobtainable, so a repair was in order. Using a spot weld drill, I removed the 501 spot welds and removed the panel. Si introduced it to his hammer and dolly and before long, it was as straight as, well… as straight as we could get it. The floor and part of the sill was also cut out to see what we were working with. 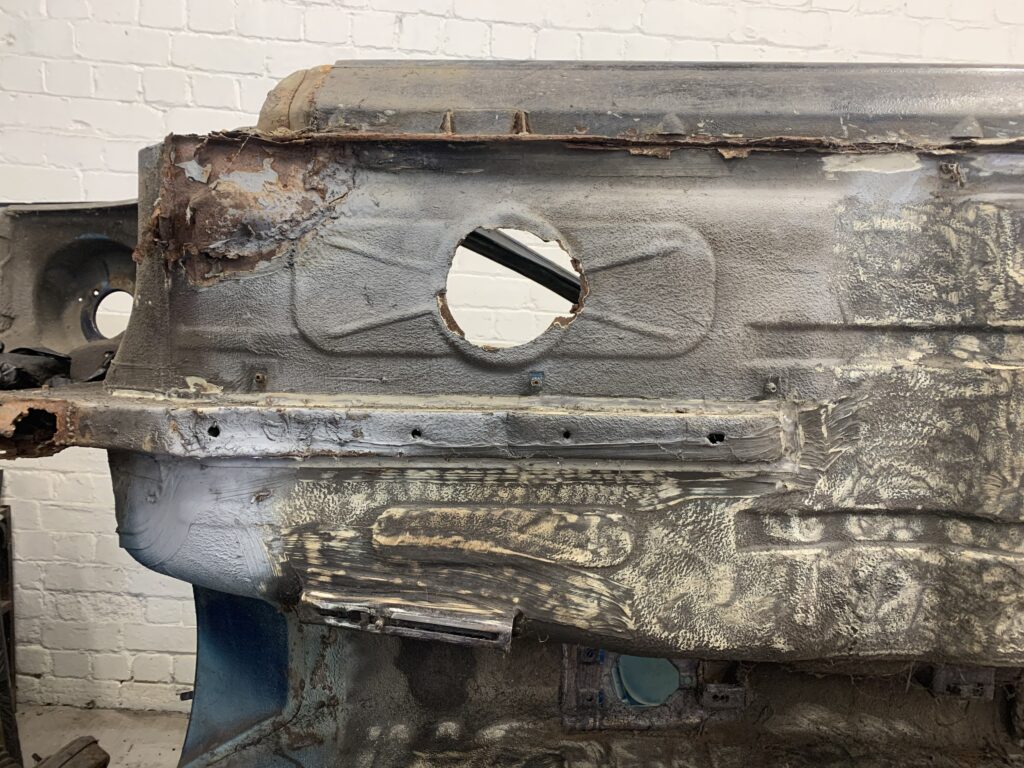 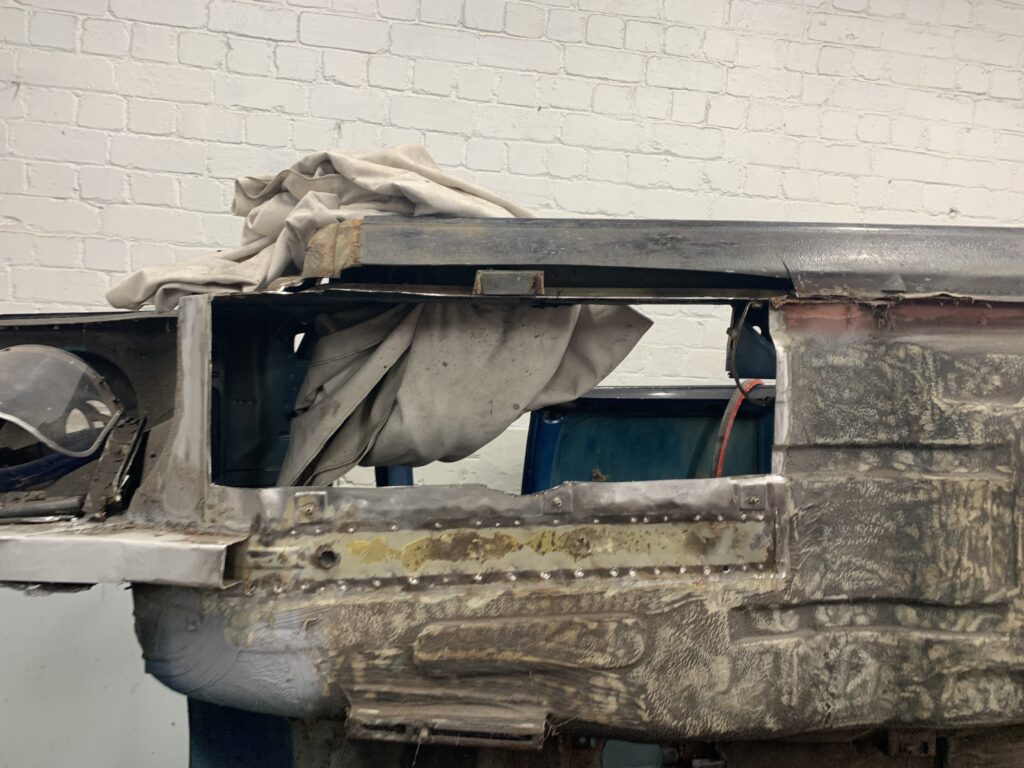 So what have I been doing whilst Si has been working on the body of the E21? I stripped the engine down and sent it away to be re-honed, have the crank checked and polished, the flywheel refaced and the head have new valve guides and seals fitted. They supplied me with new bearings and piston rings. On Facebook there is an active BMW M10 Engine group. I got some advice and decided to fit a Schrick 284 cam. My job for today is to replace the valve springs with Schrick items, then I will continue rebuilding the head, with new rocker arm kit from Walloth und Nesch. Then I’ll be painting the block and building that up. 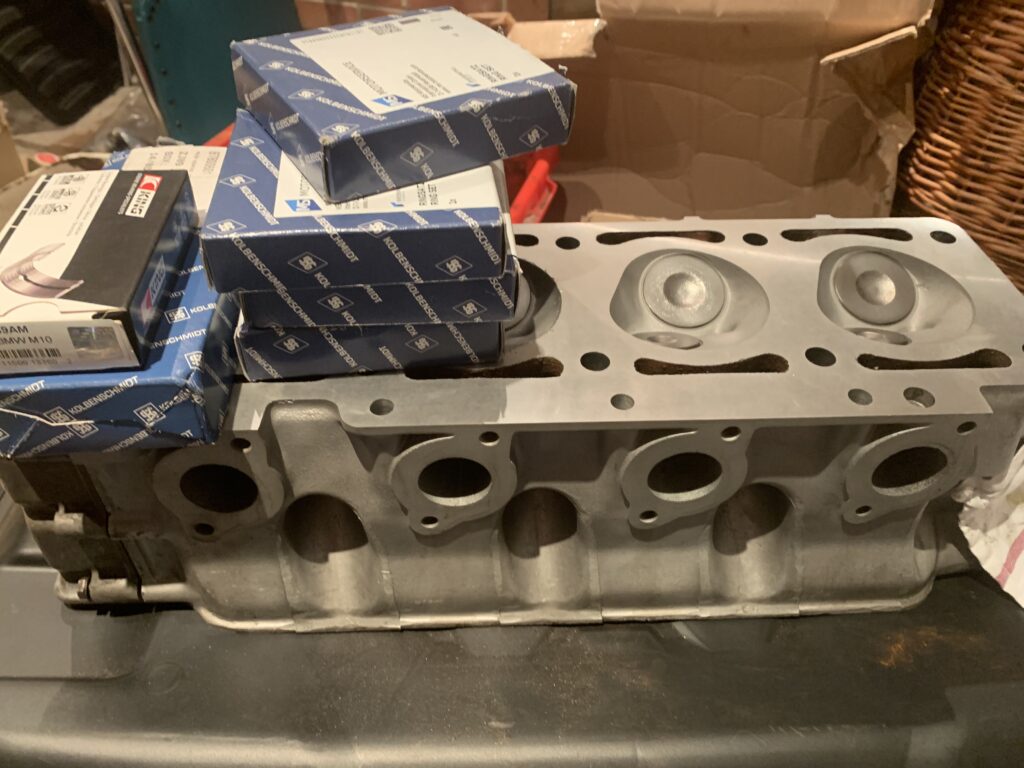 I said earlier ‘the way this E21 is turning out’? What do I mean by that? Well, my original plan was just to get it on the road, and have it as a usable classic. However, it’s turning into a nut and bolt rebuild. A lot of the fixtures were sent away to be zinc plated, and they have come back really nice, so I’ll be getting together another batch to do. It is becoming very costly, but I think it will be worth it. 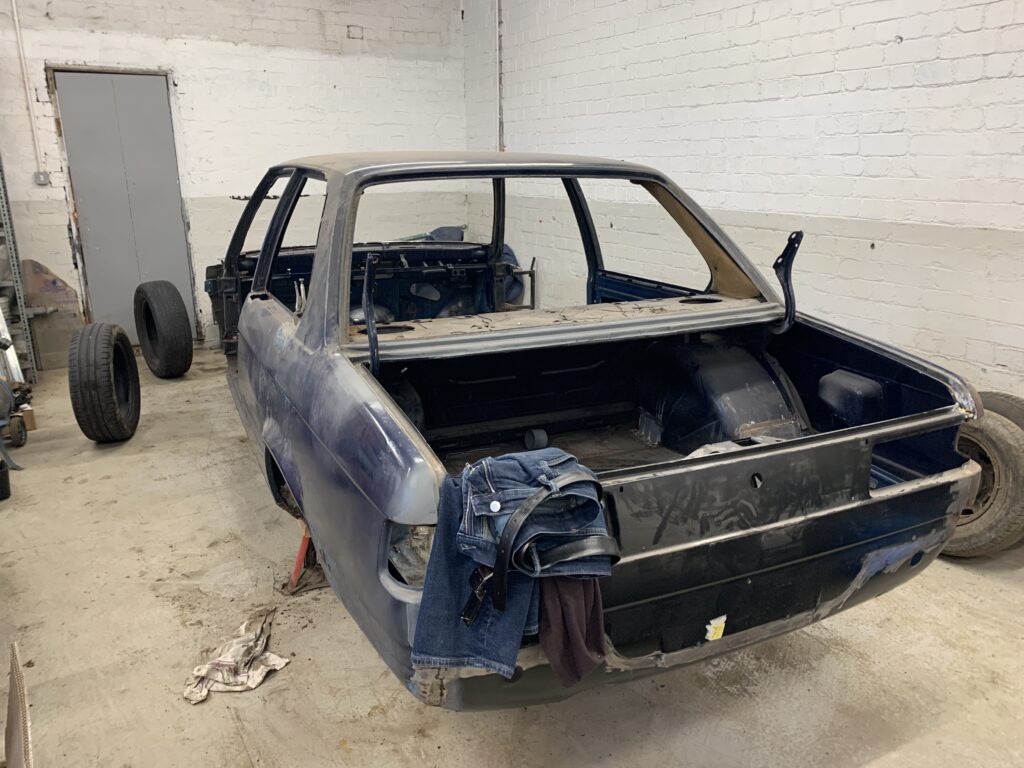 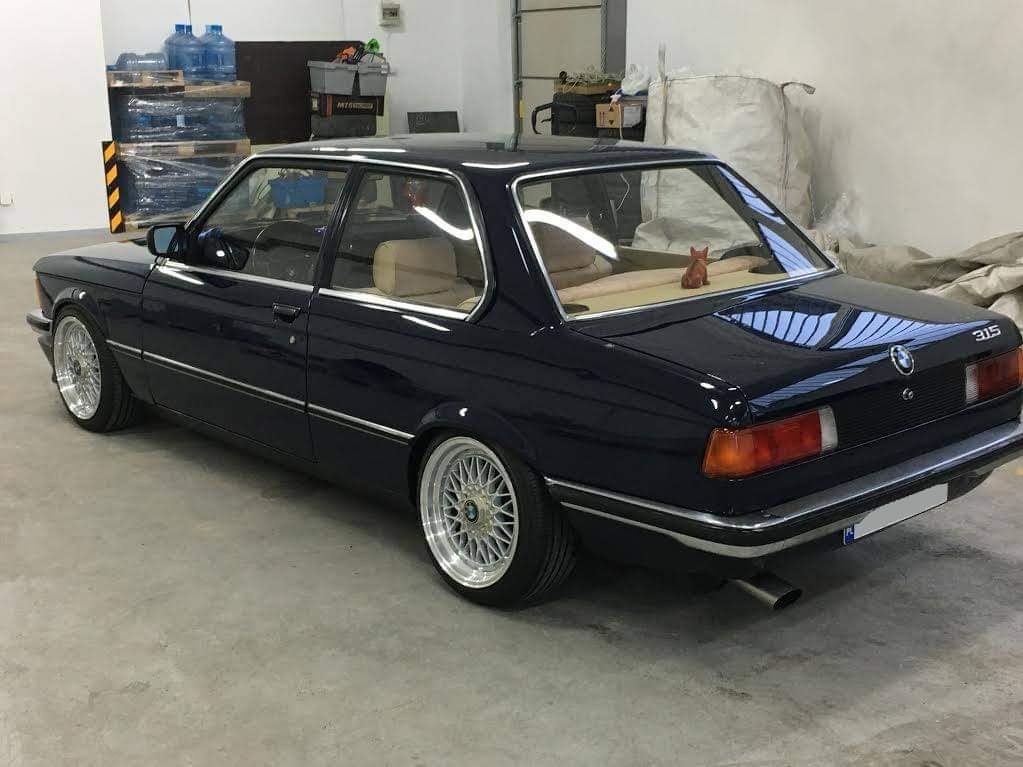