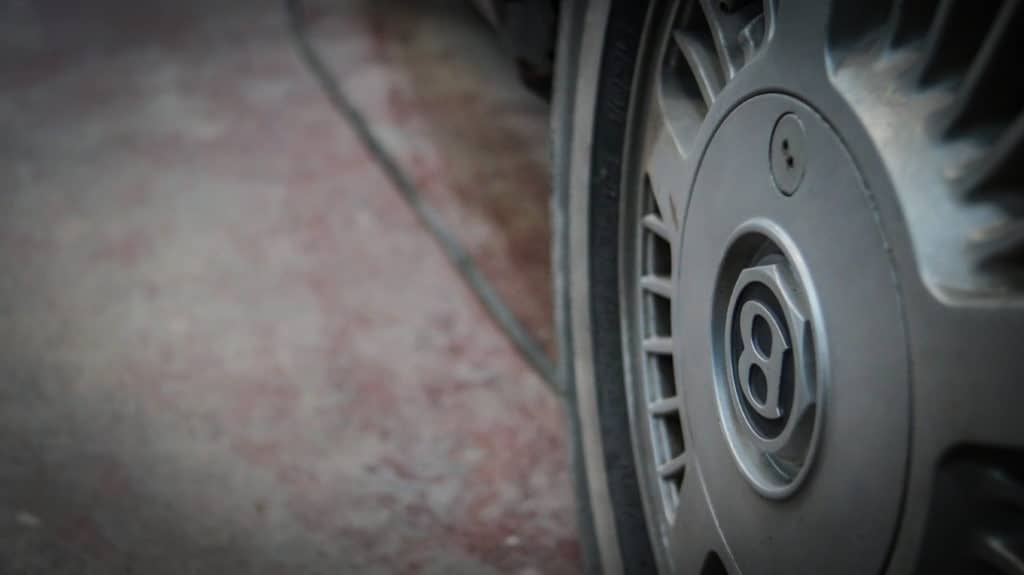 The problem with loving cheap cars is, well, that they’re cheap. And because of that, it becomes very easy to start annoying your neighbours by parking that week’s classified purchase on top of their garden gnomes. I’ve fallen into the trap of buying cars with a giddy mouse click without first offering even the slightest consideration to where I’m going to keep them. I thought we were clever by renting a little unit on a farm, but I really weren’t being clever at all. I’ve filled that up with cars, too.

Mike Chesterman doesn’t have that problem, because Mike is a thinker. He has upwards of twenty cars, but unlike us mere mortals, he has somewhere to keep them. But not only that, he has somewhere to maintain them, too. You see, what Mike did, when he couldn’t find a suitable business to look after his cars, is start one of his own. Clever. Now he has a place for all his motors, but more than that, he has somewhere where he can keep on top of their upkeep. There is no shortage of people with collections of cars, but think about it, how many of those consist of metal clogging up driveways and rusting into oblivion thanks to years of neglect? Mike isn’t like that. When his collection grows, it also improves. This is car collecting done right.

Before I get to Mike’s collection of motors, it’s worth having a look at his business, which goes under the name of Midlands Performance and Retro. The name is relatively new, having come about in 2017. However, Mike has owned the business since 2010. It actually came about after the body-shop he regularly used went out of business. Wondering where he was going to send his ever-changing fleet of cars for work, he teamed up with one of the guys from the defunct body-shop and set up his own. By his own admission, it’s been a steep learning curve, but one he’s enjoyed.

MPR as it’s now known has been in operation for nearly a decade, and the future is looking bright with no end of customers requiring its services. The team there can do anything, but there is more of a focus on the bodywork and paint side of things.

Anyway, this feature is called ‘The Collector’ so let’s get onto the collection shall we? And what a collection it is. Mike’s attitude toward cars is one that should be celebrated. He has no brand affinity – he likes what he likes because he likes it. That’s it. As we rolled up into MPR’s quiet corner of a Bridgenorth industrial estate, we were taken aback by the cars on display. There’s something to satisfy every petrolhead wont.

Mike walked us around the collection, explaining what was what. First there is the E38 728i, a car that, at £500, Mike didn’t really need but he couldn’t really pass up on, either. It has a few dings and blemishes, but nothing that Mike’s team can’t fix. And given the car was enthusiast-owned prior, it’s a good one to hold onto.

Moving down the line, there is the C125 Mercedes-Benz CL500. This aircraft carrier of a car came in at around £1,900 from an auction. It needed some tidying up, but that’s all been done. The big issue was the suspension which, if failing or completely failed, can be the death knell for these cars. Happily, it was just a loose connection on the air system, so was easily remedied. Though Mike admits it did take a long time to find the fault. Owned by a London-based surgeon, it came with stacks of history including lots of pleasing invoices for considerable suspension work, which was reassuring in that ruled out a catastrophic failure. With the suspension sorted, the big Benz was treated to a freshen up and now it truly is one of the finest examples out there.

The Mk1 Subaru Impreza was another £1,900 steal. Especially when you find out what it is. This isn’t your usual yobbo-spec, 555-stickered ‘wobwob-tsch’ machine. This is in fact a rare beast. It’s an STI Version 1. If you know your Imprezas, you’ll probably be more than interested. If you don’t, it’s holy grail stuff. These early STIs were hand-fettled at the factory and featured forged pistons, bigger injectors and around 250bhp out of the box. It’s a weapon, and while it might be sitting on temporary wheels and have an interior full of dust, it’s very nearly done. And when it is complete, it will represent the turbo Impreza as Subaru intended.

Opposite, we find some more bargain metal. There’s a Mk4 Mondeo which, to the untrained eye, looks fairly hum-drum. However, this Ghia is actually the super-rare 2.5 turbocharged model. Yes, the same engine they put in the Focus ST and RS of the time. It was another bargain auction find, though Mike admits it was a bit ‘boyed’ up when he bought it with various tinted films and stick-on bits. It’s all been put back to standard now though, and in time, Mike plans to exploit that engine for all it’s worth and get some big power out of it. Sleeper, anyone?

Next to that is the MG ZT 120, meaning a 1.8 naturally aspirated petrol. Again, this was bought from auction for not a lot of money, and on a 54 plate it’s one the of the final cars to roll out of Longbridge before it all went south. Mark our words, this is going to be a classic. Mike’s given it a full going through, and yes, the head gasket has been replaced. The ZT was one of those cars that people bolted a reputation to before they’d even driven one. More fool them, though. The MG ZT is no a respected driver’s car, despite being a bit of a big old thing.

Then we come to what, at first glance, looks like a fairly neglected and fairly hum-drum W202 Mercedes-Benz wagon. With tired paintwork framing areas of exposed metal, absent bumpers and rusty steel wheels, you might wonder what it’s doing here? Well, the fact is, it’s quite a special car. It was bought in Germany, but in UK specification. Why? Because the owner – a world-renowned female opera singer – was touring the UK at the time.

She needed a car, and she needed it to have everything, so this W202 was specified with every conceivable option, including what has to be the oldest factory-fit sat-nav known to man. This car is special in that it’s an example of what the W202 could be if every box was ticked. It’s even rumoured to have a bit more power than the brochure promised. It’s not a thrilling or exciting car, but it is interesting, and that’s why Mike has not only saved it, but why he’s also restoring it. A car doesn’t need to be from an Italian stable or a landmark of British hand-crafting to warrant restoration. It just needs to capture someone’s imagination, as this W202 has done with Mike.

Going completely in the other direction, you have the Austin Ambassador next to the Merc. Resplendent in period perfect gold and brown, this one is, as it turns out, the fault of myself. Apparently I shared a link to it on Twitter, and then Mike saw it and bought it. Again, because he simply liked the look of it.

A 2.0 fitted with twin-carbs, it’s the M3 of its day (okay, that might be stretching it a bit). The interior is wonderfully perfect, with a back seat full of awaiting NOS and Unipart period correct service items. We like this one, just for weirdness and rarity if nothing else. The Ambassador had its work cut out for it due to its predecessor, the Princess, being less than perfect. That said, if you take it on its merits and enjoy it for what it is, it’s a great car. And you have to remember that while the Rollers and Porsches are being restored, cars like this are falling by the wayside. That’s why we need people like Mike.

Inside the MPR workshop is where the customer cars live, as well as some of Mike’s, obviously. The VW bus, the Bedford CF, the immaculate re-painted Mini shell and the bright orange Beetle all belong to happy customers. And they’re all lovely, but they’re not what were here to see.

Sitting at the front of the workshop is a Mitsubishi Shogun Commercial, another of Mike’s toys. This one is being restored with a view to being the ultimate winter vehicle, and again, it came in at less than two grand to buy.

Filling up the middle of the workshop is Mike’s Bentley. This one cost Mike £2,500 at auction and it’s arguably the biggest bargain in his collection. When bought, it was on the road and had a healthy MOT. It was simply a victim of being in a room with the wrong bidders, hence Mike scooping a bargain. And because it was such a bargain, Mike can happily drop a couple of grand into making it perfect, which is why it’s sat here with no paint on its panels. It’s getting a full re-spray before it hits the road once more.

The blue car on the spit, in case you’re wondering, was a Mk6 Escort. It was Mike’s first car, but it’s come a long way since those heady ‘new driver’ days. It started life as a GTi, which played host to a whole heap of modifications, even earning it page space in Max Power back in the day. Now though, it’s moved on. The floor was cut out and in its place the floor from an Impreza was welded in, along with a very comprehensive cage thanks to Custom Cages. The engine is built and awaiting installation, but it’s not a standard lump. It promises somewhere in the region of 600bhp plus nitrous, but Mike has a lot of spannering to do before it fires up again!

Behind the Escort is Mike’s Ferrari 308GTBi – see, I told you his tastes were eclectic. Bought in bits as an unfinished restoration project, Mike and his team are in the process of fettling the bodywork in readiness for paint and a full rebuild.

It is a wonderful collection, and one that has also created something wonderful in form of Midland Performance and Retro. Mike isn’t just a man who likes to collect cars, he’s a man who likes to collect them and then breathe new life into them, irrespective of end worth or wider desirability. He buys, saves and enjoys these cars because he likes them, not to please other people. And that’s a special thing in our eyes. You shouldn’t buy cars to excite other people, you should buy them because they excite you, like Mike. So, be like Mike.