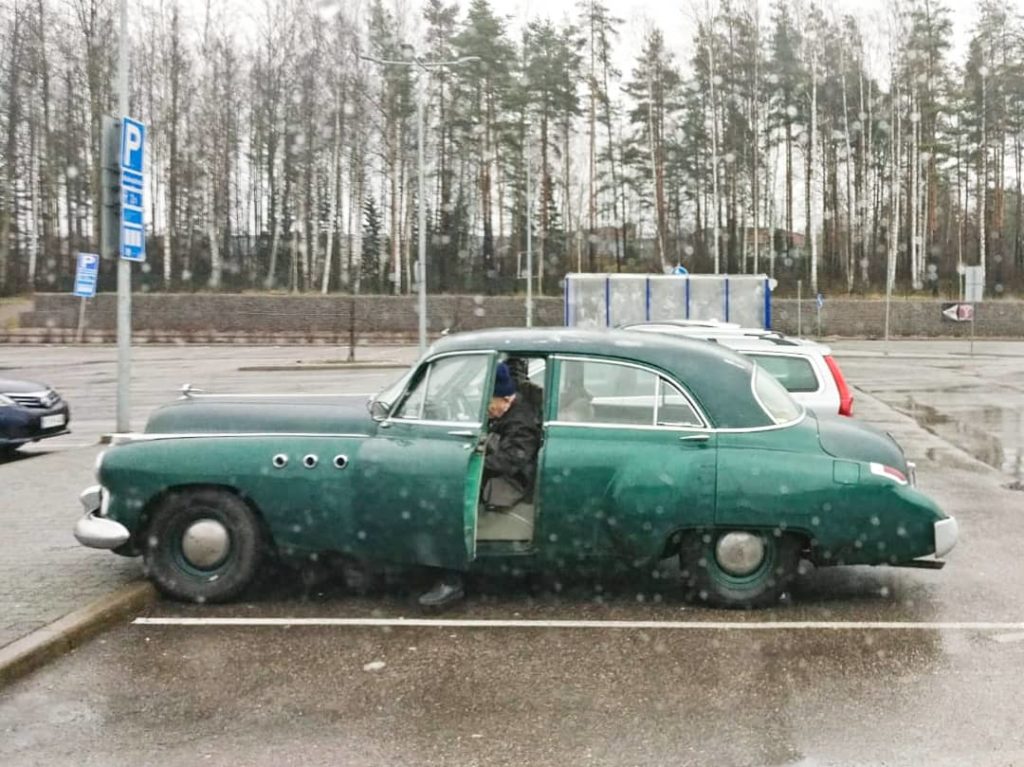 We have not done a Not £2 Grand Hero of the Week, but perhaps we ought to start. And I would like to begin by nominating Roald ‘Pelle’ Lönnberg. He lives in Espoo, Finland, and has been driving a 1949 Buick Super 8 since 1960.

I have a friend who lives in Helsinki, and he has spotted this Buick a number of times, usually parked in a supermarket car park. When he can, he quickly grabs a photo and sends it my way, because he knows how much I love this car. I posted his latest photo on Twitter earlier, and another Finn replied with a link to an article about the car. It turns out the story is way more interesting than ‘cool old guy drives cool old car as a daily driver’.

Pelle bought the car in 1960 for the equivalent of €1200 in today’s money. At that point, he was already the fifth owner. It was pressed into use at first as transport for Pelle’s band, Lönnberg’s Orchestra, once hauling eight people and all their musical gear from a gig. After Pelle got married and had children, it became the family car, soon racking up the miles making roadtrips to different parts of Finland and Sweden. In the last fifty years, it has made a yearly 2600km round-trip to Kebnekaise in Sweden. Pelle is a flying enthusiast, and has even towed a glider to the Swedish mountain behind the Buick.

As you would expect, you can’t keep a Buick of this vintage going without a bit of mechanical know-how, and true to form, Pelle has done all the work on the Buick himself over the years. Occasionally he has found parts difficult to source, once having to use a water pump from a tractor that just happened to fit the Buick’s block. He reckons he has spent just a few hundred euros a year on maintenance, as he only pays for parts. That, combined with the Buick’s reliability – it has only left him stranded a couple of times for minor things, like a failed fuel pump – means that this has been budget motoring at its finest. The only thing Pelle is inclined to complain about is the cost of petrol; the car does 18mpg on a run.

These Buicks are no speed machines, the 4.1L straight-8 pumping out a whopping 115bhp (although Pelle claims it will do 140km/h comfortably). However, this has worked in his favour, because at just 6.6:1 compression, the engine has certainly not seen a hard life. All this means that, driven regularly by someone with good mechanical attunement, the Buick has now logged over 800,000km, and shows no signs of giving up.

Sure, the car is battered and bruised. It wears some mismatched paint. But Pelle has no intention of getting rid of it. He can’t afford a new car, and more importantly, he loves his Buick. And while this is a different flavour to the usual stuff we post, I think the spirit of Not £2 Grand is alive and well here. I’m heading to Helsinki in March, and would like to find this man so I can shake his hand.

I can’t help but think we ought to dub Pelle our Not £2 Grand Hero of the Week.