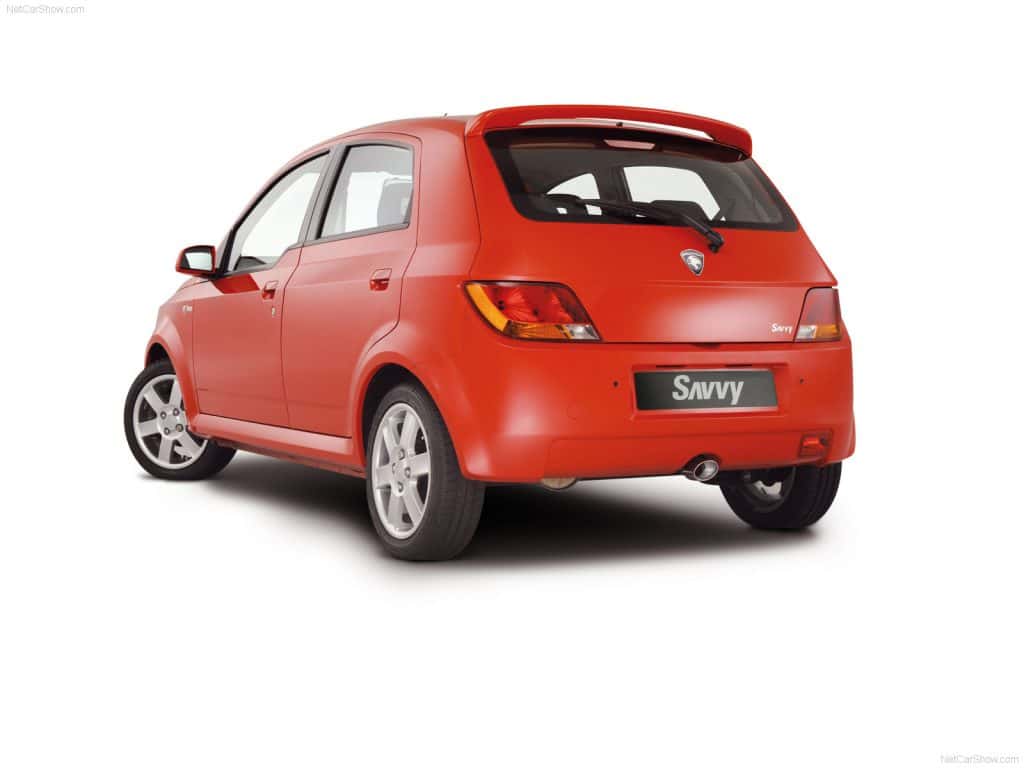 Where do we start with this, the Proton Savvy. Never has a car been so undeserving of its name. Savvy. This is car is not savvy. It is the wheel equivilent of when your mum named our slow, fat, stupid cat, Dash. There was no dash in him. There were bits of Lego in him. We know this because he unceremoniously barfed some up once. But that’s another story. Back to the Savvy.

That would be what the dictionary has to say about that particular adjective, before the people at Proton forcibly wedged it into a noun suit. But wedge they did. And when it came out, buttoned up as name, they glued it to the back of this pint-sized monstrosity:

Why does it look like something Richard Scarry drew? Why do the front doors have the weird kick in them? Why is it harder on the eye than naked mole rat wearing a Borat thong? Why does it exist?

It exists because Proton, a company that has never had an original thought, had thoroughly flogged the bones of of Citroen AX to death by (wait for it) the year 2000. Yeah, the car Citroen binned off in 1998 was taken by Proton and squeezed for another two years. Though Proton didn’t call it the AX. It called it the Tiara. No, we’re not making this up.

Presumably even Proton realised trying to sell a car designed in 1986 to the 2000 market was a bit of a dead end. As such, it set about the Tiara Replacement Model. That’s the official code-name. See, not an original thought in the house.

It took five years for the Savvy to happen, which is five years too long. But then Proton did have a stab at this itself, rather than just putting its badges on an ancient French hatchback. Though not wanting to stray too far into the realm of original thought, it did steal the dated 1.2 engine from Renault. Old habits die hard, evidently.

In a weird twist of fate, Rover actually looked at the Savvy development in 2004 with a view to re-badging it as its own so it had something to wedge into the city car market. For reasons we’re not sure of, it didn’t happen. So instead we got the Cityrover. A car so bad it made the Savvy look like a reasonable proposition. But we digress.

You could have the Savvy with an engine. Just the one. Namely the 1.2 four-pot Proton nicked from Renault. When it wasn’t being overwhelmed by confusion, what with not being in a Clio anymore, it produced 75bhp, which to be fair to the Savvy was more than it’s class peers. However, it was a noisy lump with a five-speed manual gearbox that was notchy yet vague. The semi-automatic was even worse.

On the road, the Savvy promised big things. In some dubious marketing, Proton was keen to point out that it owned Lotus when launching the Savvy. It was not, however, keen to point out that no Savvy had ever been to Norfolk. So it’s bit like living in a studio flat above a chippy, but telling girls on Tinder your dad has a four bed new-build, but without mentioning the Dad bit. Basically, Proton lied.

So it didn’t look like a Citroen AX (a blessing, probably). It didn’t handle like a Lotus. It wasn’t fast. It wasn’t savvy in any way, shape or form, then. But was it good at anything?

Well, yeah. It had a lot of space inside. You could fit four actual adults in there. Though they wouldn’t thank you, given the Savvy was about as beautifully finished inside as a secondary school student’s woodwork project. But because if the noisy engine you wouldn’t be able to hear them, so swings and roundabouts.

Proton tried with the Savvy, there’s no ignoring that. It was cheap, which iwas good, and it was well-appointed, which was better. You got air-con, electric windows, alloys and other bits and bobs as standard, including a Clarion stereo. But the many didn’t amass a worthwhile whole. It was rubbish. Sorry, but it was.

It was bought by the kind of people who know as much about cars as a gerbil does about quantum physics. If anyone who had actually sat in car prior to a Savvy got close to one, they and their wallet ran away.

And so should you.