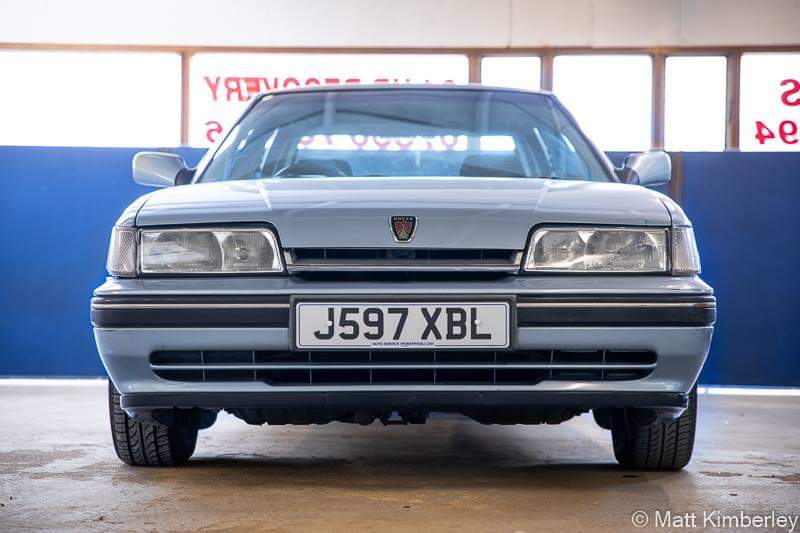 To quote the inimitable Miss Spears, “whoops, I did it again.” Except in this context it means I’ve bought yet another Rover. It doesn’t mean I’ve accidentally slept with someone. At least I don’t think I have. I’ll await my invitation to the Jeremy Kyle show just to be safe.

Firstly, Project Alan is a Mk1, registered in January of 1992, whereas Project 800 is a later Mk2, registered sometime in 1999. That’s the big difference. The Mk1 and the Mk2 were, largely. the same car. However, the Mk2 got softer lines and rounder edges. The Mk1 is an altogether more angular affair. It might be a 1992 car, but trust me, it’s very much a product of the 1980s with its slab sides and right-angled features. But as a product of the 1980s myself, I like it. Though I’m less angular, more Michelin Man. But that’s beside the point. MOVING ON.

Look at its handsome face! Well. I think it’s handsome. Most people who like Rover 800s (there are dozens of of, DOZENS!) tend to favour the Mk1 face over that of the big-grilled Mk2. I like both. I also love the angular, squareness of the Mk1. It looks like it was designed with nothing more than a steel rule and a mechanical pencil, and for that, I love it. It’s un-apologetically brutish. This was a car for top-tier managers and people with many letters after their name. It had to have presence. What’s most interesting is that it still has presence today. It’s a big, BIG car. People are keen to point out that modern cars are overly-big, and as such, dwarf the cars of old. And in the case of Fiestas and Minis, that’s true. But not with the 800. This is still a huge slab of metal.

But that’s enough about the history of this model. What about this one? How did I come to own it? Well, it’s all the fault of our photographer friend, Matt Kimberley. He lives around the corner from a garage in Pontypool, Wales. A garage that, just a few weeks back, closed its doors after 99 years of business. Sad times, but every grey cloud has a silver lining.

That lining came in the form of two Rover 800s – a Mk1 and a Mk2. The latter was a 2.0 manual with only 27k on the clock. A nice car, but it was more money than we had. The Mk1, however, was a bargain. As I scoured Matt’s tweet about said cars, I learned it had MOT until December and just 82,000 miles on the clock. I also discovered – and this was the big selling point – that it was a 2.7 V6. That’s the Honda engine. And what’s more, it was a manual. I had to have it.

Manual 827s simply do not exist any more. If you can find a Mk1 800, the chances are it’ll be auto. According to Howmanyleft.co.uk, there are eight. Eight manual 827SLi Rover 800s. This, love it or hate it, is a rare, rare car. And to my mind, that means it’s well worth saving. It’s also not going to be messed about with. My 800 Vitesse Sport is rare with only a suspected 18 left, but it’s had a hard life, so I don’t feel bad about modifying it slightly.

The 827SLi will be staying standard. I think it’s important to look after it. It’s an example of when Rover was at the top of its game. Plus, it’s bloody magnificent to drive. Though I really should get all the belts done before doing serious mileage. You see, while it does indeed have MOT, it hasn’t for the last fifteen years. Instead, it was just sitting inside a dealership collecting dust. My sudden purchase and push into being driven will no doubt be a shock to its Cowley-built system.

It does drive lovely though. The steering wheel isn’t on straight, and the heater only seems to blow cold air, but other than that, everything works as it should. The electric seats, the trip computer (which is something akin to a prop from Alien), the cruise control, it all works. Even the windows work, though not at McDonalds. Seriously, I’ve been to the golden arches twice, and twice the windows have gone ‘nah you fat sod’ and stayed stuck shut. It’s weird, like somehow it got possessed by the spirit of Mr Motivator or something.

It’s also shockingly cheap to run. It seems to be relatively frugal for its size and engine capacity, and it cost me a mere £180 quid for fully comprehensive insurance though Adrian Flux. That’s some cheap motoring. Though I’m sure I’ll rue those words when I have to get the timing belt changed. But whatever, I’ll worry about it then.

There you go then, that’s your introduction to the big blue beast that shall henceforth be known as Project Alan.

There’s a lot of work to do to get it where I want it. The body has some rust, and is riddled with dents and dings, the wheels need a refurb, it needs that service I mentioned, I need to fit the new stereo and speakers, and there’s about a million other little things I’ve forgotten.

I am happy with it though. I know it’s not to everyone’s taste, but frankly that doesn’t matter. It’s to my taste, and as I own it, that’s all that matters really. But it would be nice to know it makes some of you smile, too.