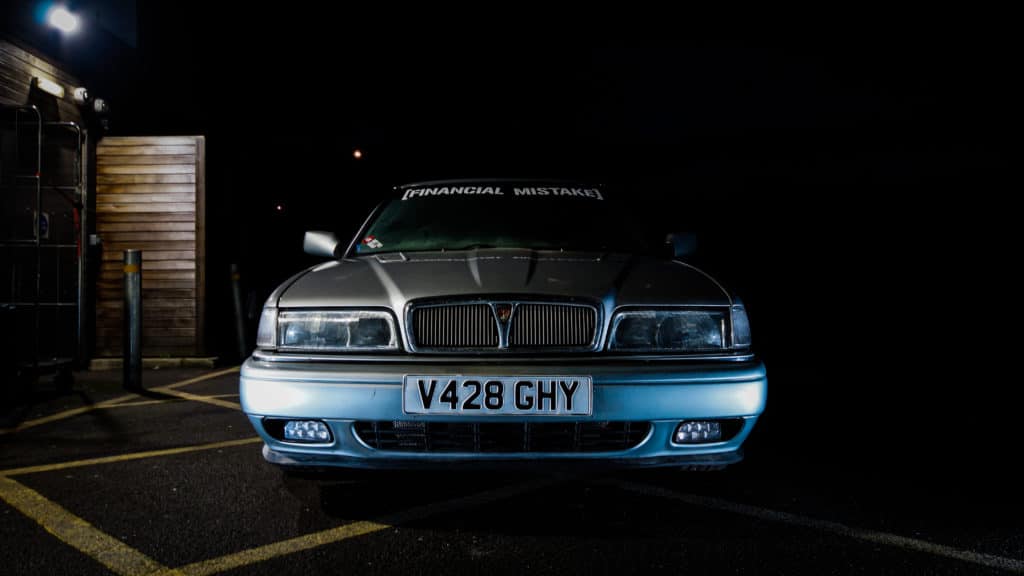 I’m not going to lie, it’s been a busy and stressful time. The busy bit is fine. As I think I’ve mentioned in previous posts, I’m now the Editor for Car & Classic, Europe’s leading classic car website. This is good, because it’s frankly the best job in the world. However, it’s quite full-on, so there some time pressures brought about. Compound this with it being the dark, dark winter, and it leaves minimal time for tinkering.

“But you have a unit” I hear you cry. Well, I did have a unit. It turns out that in their mind the place is full of F40s and Lamborghinis, not a load of shit old scrap. As such, when I (admittedly foolishly) posted some pics of the unit along with a video, they hit the roof and frankly, behaved like children. Not that there was anything to give away the location. It should have been a conversation and a ‘don’t do that please’. Instead it was shouting and name-calling and a demand to be out by the end of December. Fine, whatever.

I was getting a bit annoyed with the place anyway. Tools kept going missing, the 800 was being messed with and in some cases vandalised – they left a block with a nail through it under the back wheel, which I of course drove over. Wankers. Anyway, life’s too short to be dealing with, or trying to deal with, people like that. So I’m out. I’m glad. It’s nice to have the car at home again.

There she is, on a recovery truck. A recovery truck she’s been on twice before. A worryingly common occurrence. But anyway, moving on.

I hadn’t done a lot of work to the car while it was down at the unit, due to the fact I could never get at the bloody thing because my corner was always hemmed in by old shit. However, as the eagle-eyed amongst you may have spotted, it does have bonnet vents now. Real ones. £12.99 of eBay’s finest. I figure that as it’s a Rover, anything to help keep the engine cool has to be a good thing. Plus, the vents will provide an exciting exit point for debris when the engine explodes. Because Rover.

I touched up some paint bits on the front bumper. Oh, and I fitted a boost gauge, a digital one. Again, this was eBay’s finest and was about £20. It was £20 not well spent. It worked. Once. I then decided to stop being such a tight bastard, and instead bought a TIM mechanical gauge. This seems to be working. However, as it’s on the passenger seat at the moment, there is still some work to do. I need to route the hose up through the dash. A normal person would have just removed the clock and mounted it there. But I like my clock, so the boost gauge is going on the dash. It’ll be like being in a Subaru then. Right?

What else have I done? Not a lot. Instead, now that the car is home and I can start it up and move it about, I have been sent on an unfortunate journey of discovery. First of all, it was running like a bad of spanners. Wouldn’t idle, kept dying, a real pain. I didn’t understand, as the engine is in reasonably good health. I’d driven it before. It has new leads, a new coil pack, new plugs, new filters, oil, so on and so forth.

Turns out the t-piece for the boost gauge was channelling its inner sieve, so I had a whopping great vacuum leak. Car runs fine now.

The other discovery came when I was trying to figure out, why, when the car is unlocked, all the door/puddle lights stay on. Unlike a normal car, the momentary switch for these lights is not hidden in the door shut, instead it’s part of the lock assembly. Annoying. More annoying, however, was the discovery that the little beep it does when I lock it with the key is not a good thing. I thought it was normal, it’s always done it. Like a little audible confirmation it was locked. But no, that’s Rover speak for ‘something wrong boss’. Sigh. Something else to sort out.

Oh, and the temp gauge has stopped working. Because of course it has. It’s not like the temp gauge is vital in an old Rover or anything. I’ll put a meter on the sender and see if it’s working. Hopefully it’ll be a simple fix.

As evidenced by the video above, there is also a new car on the fleet. This is my 1991 W124 230 Mercedes-Benz that set me back a whopping £100. It’s not a N2G car though, instead this is one for work. Being German, this one works, which is nice. However, it needs a lot of work to make it nice, and because that one is coming from the old paymasters, it’s sort of taken priority.

The other thing that has help up progress on the 800 is January itself. I don’t get paid until the 92nd of the month, so the Rover is on a back burner until then. I will, however, get it MOTd in February. That is my one goal for the month. Get it on the road.

So there we are, that’s where we’re up to. Lacking a bit of enthusiasm at the moment, but we’ll get there. I love that the 800 is home, as it means I’m more inclined to do the work it needs. It’s just downstairs now, not 22 miles away. That’s a good thing. I’ll get it buttoned up come pay day, and we’ll get it in for a test, and then the fun can really start.

There has been one small, positive step, too. I fixed some cracked lacquer. Scotchbrite pad, new clear, lovely. It’s the little things that spur us on with projects, right?